Some people may tell you that finding samples is all about digging through crates of obscure records, while others claim that an expensive sample pack will solve the problem of getting that perfect EDM kick tone. And, while these aren’t necessarily incorrect, there are some free sample libraries out there that, when used in context, can help you create detailed soundscapes and head-bopping grooves.

The main caveat with these libraries and samples is that you will have to check licensing agreements on some of the sounds before you include it in a track you’re planning to release. Some of the material you find may not be available for commercial use or will require you to credit the original creator of the sample. Now, with that being said, let’s go through ten of our favorite sites that we think are worth out.

BandLab Sounds gives producers access to a massive library of royalty-free samples and loops to create with – all fully downloadable and ready to use in any DAW.

The service was launched by social music-making platform BandLab and features over 10,000 sounds – conjured up by an array of top artists, professional sound designers and even 15 packs from MusicTech as well. Samples come as uncompressed WAVs and are downloadable via web or mobile.

Sounds can be downloaded as entire pack or as individual samples. There’s also an auditioning tool built-in to the web-based platform. Each sound is also royalty-free, meaning you’re able to freely use them in your tracks and commercial works.

Samples From March specialises in bringing sounds from classic hardware machines into the hands of software producers. The great thing about the sample packs from Samples From Mars is they aren’t just cleanly recorded sounds – they are also run through more analogue hardware, such as an API console recording to tape, so you’re also getting a genuine analogue warmth into your tracks. The 808 From Mars packfor example, features clean, colored and saturated versions of each kick tone and length.

Samples From Mars loves discovering obscure, vintage and great sounding synths from yesteryear and making them accessible to the music-makers of today. The recent Dr Bohm Digital Drums and OB From Mars packs are enough evidence for that.

Browse the collection of Samples From Mars’ free samples here.

If you aren’t familiar with Legowelt, your favorite producer probably is. His career spans over twenty years, more than a handful of aliases and, fortunately for us, an extensive sample library that he uploads to his website for free download. He’s taken the liberty of meticulously recording his collection of synths and drum machines, offering hundreds of one-shot samples, pad sounds and loops for each instrument.

If you ever wanted the sounds of a genuine Roland Juno 106 without going out and buying one, Legowelt has 250 samples from his, including big basses, mysterious pads, chords, haunting strings, sequences, arpeggios, drums and more. All files come in a .zip folder and the sounds are all in 16bit WAV format. Regardless of genre or taste, you truly need to browse the site and play around with some of the instruments here.

Having downloaded quite a few of Goldbaby’s packs ourselves in the past, we can truly vouch for its “passion for vintage drum machines, synthesisers, vinyl, tape and music technology”, as stated on the homepage of its website. The Goldbaby studio is packed to the brim with synths, drum machines, mixers and recording gear, meaning a lot of the sounds you get are touched by analogue warmth. Goldbaby has worked with major music technology brands in the past including Appleton, FXpansion, iZotope, Native Instruments and PreSonusso you know these sounds are sublime.

Goldbaby’s free section has an eclectic selection of drum machines, synths and some small tasters of buyable packs. Many of the sounds in these packs are sent through tape machines or valve equipment, such as the Valve SK1 Drums, which comprises vintage Casio SK1 samples processed through SPL and Thermionic Culture valve gear. There’s no sign-up process to get the free samples from Goldbaby, although it’s always worth signing up to the newsletter so you know when a new sample pack has dropped.

A free membership to Noiiz gives you access to its entire catalog of Free Packs, with as many downloads as you like. Signing up for a free membership is as simple as entering your email address and making a password. The free area isn’t a stingy selection either, with over 500 packs to download, each containing around 10 sounds – no lengthy maths equations needed here to outline how many sounds are available to you. The packs include sounds for jazz, trap, d’n’b, neo-soul and much more, it’s definitely worth checking out if you’re after some new inspiration.

Noiiz also has a subscription-based service, starting at $10/mo, in which you are given access to a plethora of new sample libraries. This includes packs from professional creators and artists, such as Hashfinger, Samplephonics, Machinedrum, Letherette and more. You’ll also have access to the Noiiz plug-in, which works in a similar fashion to BandLab Assistant, with a swift drag-and-drop mechanic to load sounds into your sessions.

You can download sounds from Noiiz’s Free Packs area here. 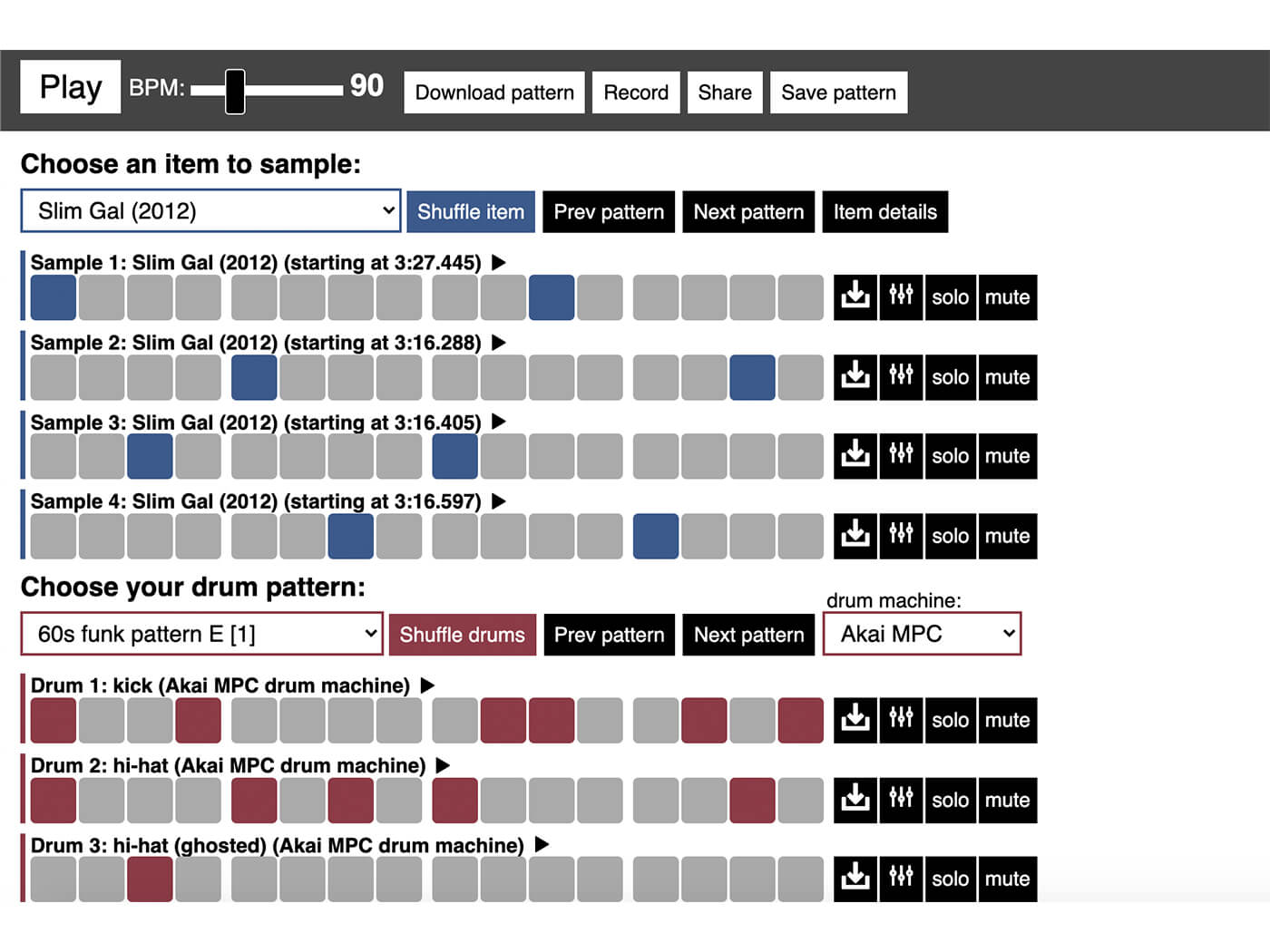 Perhaps a surprising addition to this list is the database of free samples that the US Library of Congress has built. Citizen DJ is a resource that lets you browse audio recordings from over a hundred years ago, presented in a colorful interface with tools that allow for the instant browsing and auditioning of sounds. It comprises soundtracks from movies, public service announcements, spoken word pieces, classic recordings and more from the Free Music Archive.

Once you’ve selected a sample, the site presents you with a sequencer that lets you slice up a sample and partner it with a drum track of your choice. Drum tracks are built with sounds from classic drum machines and patterns, which you can sequence in your own way. You can download individual samples or get them as sample packs containing thousands of clips. The project was created for hip-hop producers and DJs by Brian Foo, a Library of Congress Innovator-in-Residence, who was inspired by the aesthetic of hip-hop records such as Fear of a Black Planet by Public Enemy.

Browse and play the Citizen DJ tool at citizen-dj.labs.loc.gov 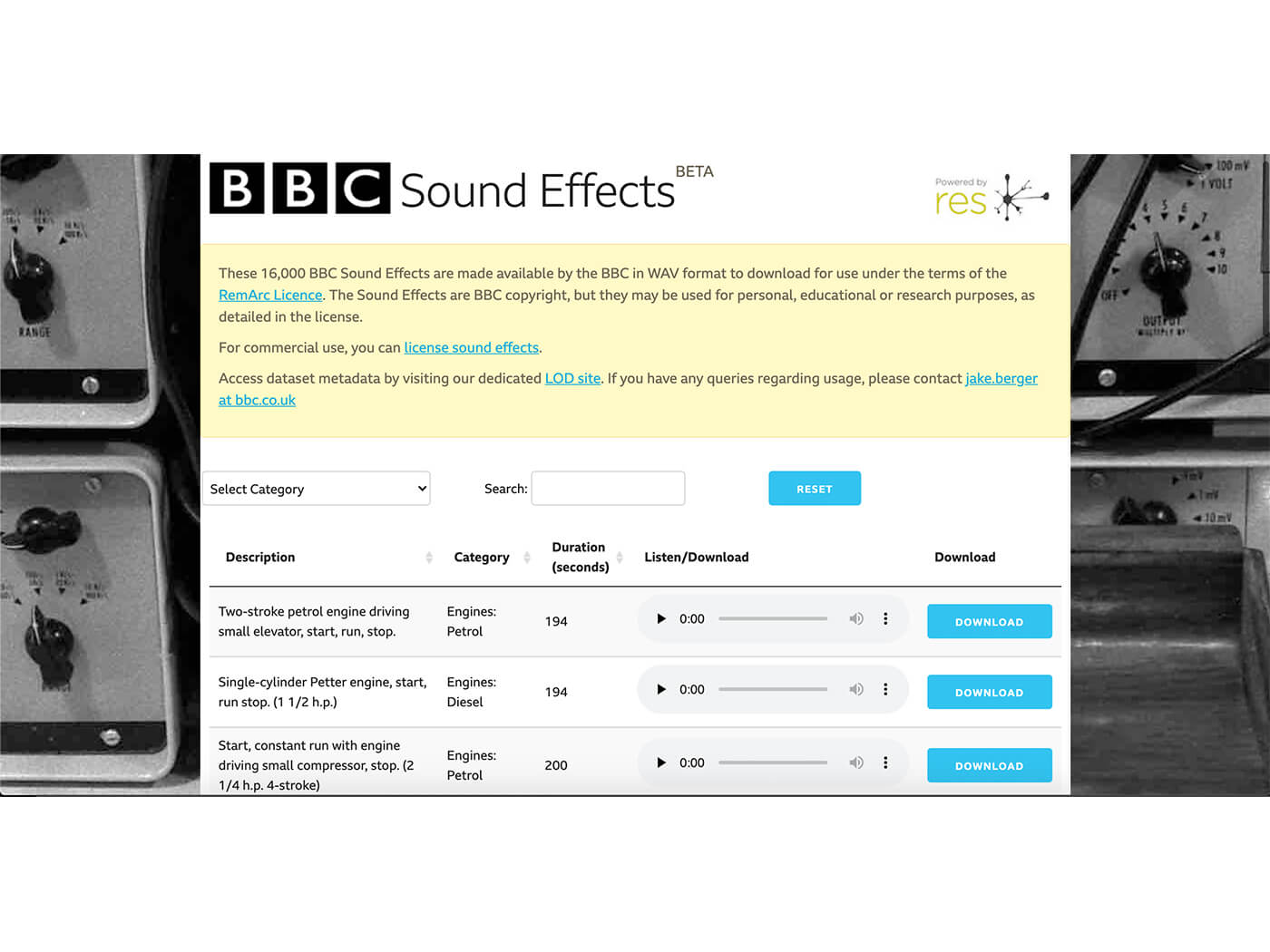 The BBC has made its vast collection of sound effects downloadable for free in WAV format. A library of 16,016 recordings is accessible to all users under the terms of the RemArc license. Importantly, the license means you won’t be able to use the sounds in a commercial project. However, it could be an ideal resource for honoring your skills as a sound designer, building a portfolio or for education.

The library boasts sounds from the 1920s onwards, with samples including FA Cup Final Wembley 1966, Khatmandu: Busy street with heavy traffic and bizarre samples such as Inside a human or animal body. The sounds are split into categories that range from World War II to St. Paul’s Cathedral, to Washing Machine and Volcano. You can also use a search bar to quickly locate specific samples, with each sound given a description, duration time and built-in player to listen to the sound before you download it. 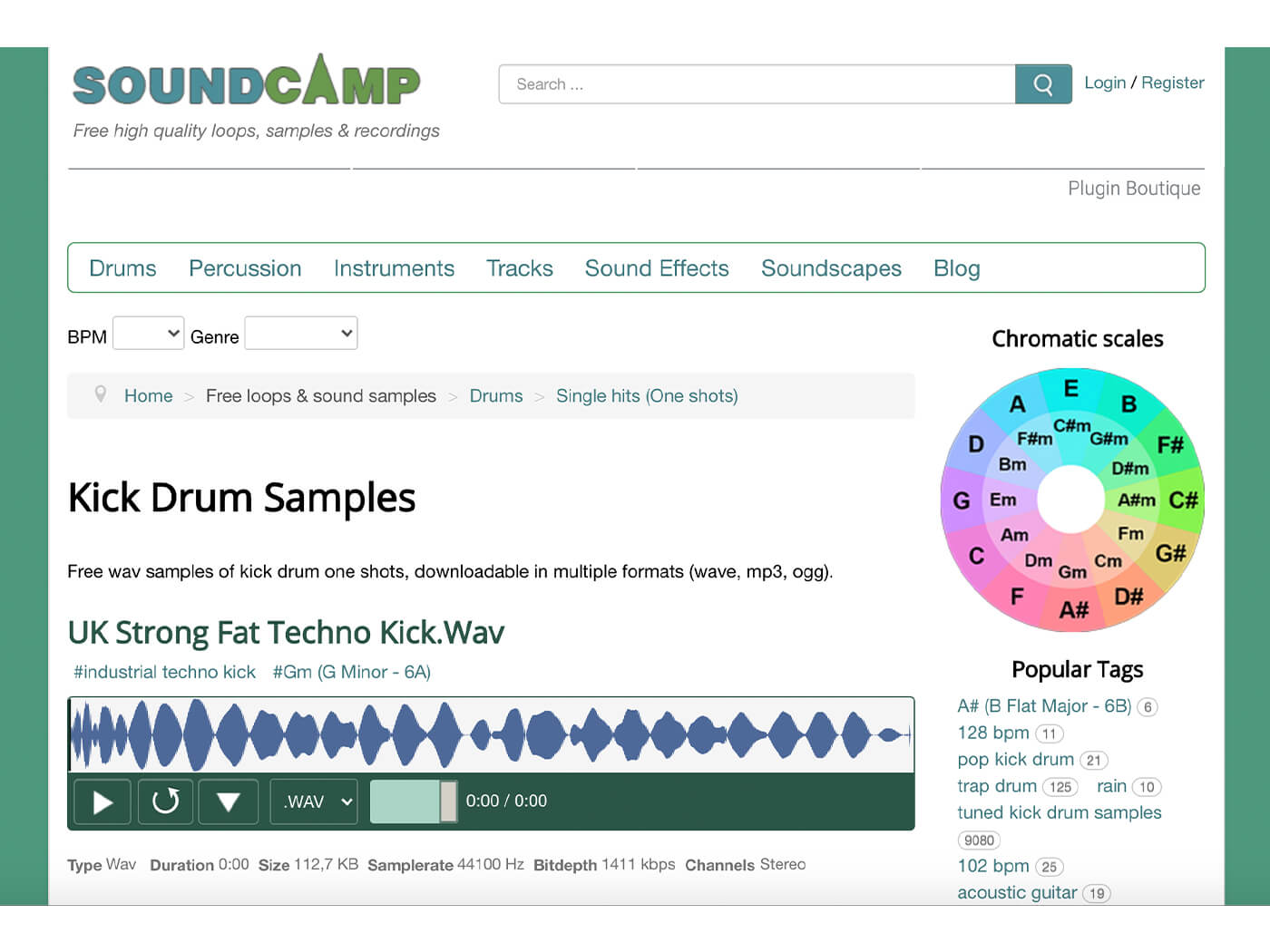 You can find tens of thousands of free samples on Soundcamp, split into drums, percussion, instruments, tracks, sound effects and soundscapes. Doubling as a music production blog, Soundcamp gives you a Camelot Wheel – initially created by Mark Davis as a tool for DJs – which lets you pick out samples in a specific key. This is ideal if you’re looking for a bass line in the same key as your track, for example.

Upon selecting a tag like Jazz Snare Drum, or a musical key, you’ll be presented with related sounds each housed in a player. This lets you play the sample on a loop and set the volume, with details below on the file itself, such as bit depth and sample rate. From the player, you can select whether you want the file as a WAV, MPG or OGG and then instantly download it to your computer.

Browse for free samples at soundcamp.org

For found sound, Freesound is a goldmine. Functioning as a collaborative database of audio samples recorded and uploaded by fellow users, Freesound is exactly as described – free. It’s pretty much as easy as typing in the desired sound into the search bar and see what the database has to offer. With rating systems, waveform previews, tags, download count and other filters, you hopefully won’t be spending hours flicking through clips to find the kind of thing you’re looking for.

The site is excellent for gathering Foley sounds, soundscapes, one-shot samples and other interesting pieces of audio that you may not have direct access to. The catch is that not everything will be cleanly recorded, or recorded how you’d necessarily like, but it’s a great resource to find material and get creative. Be mindful of the licensing on Freesound as well, as some of the users may wish to be credited if you use their sound in a composition.

Have a browse through Freesound’s community sample database here. 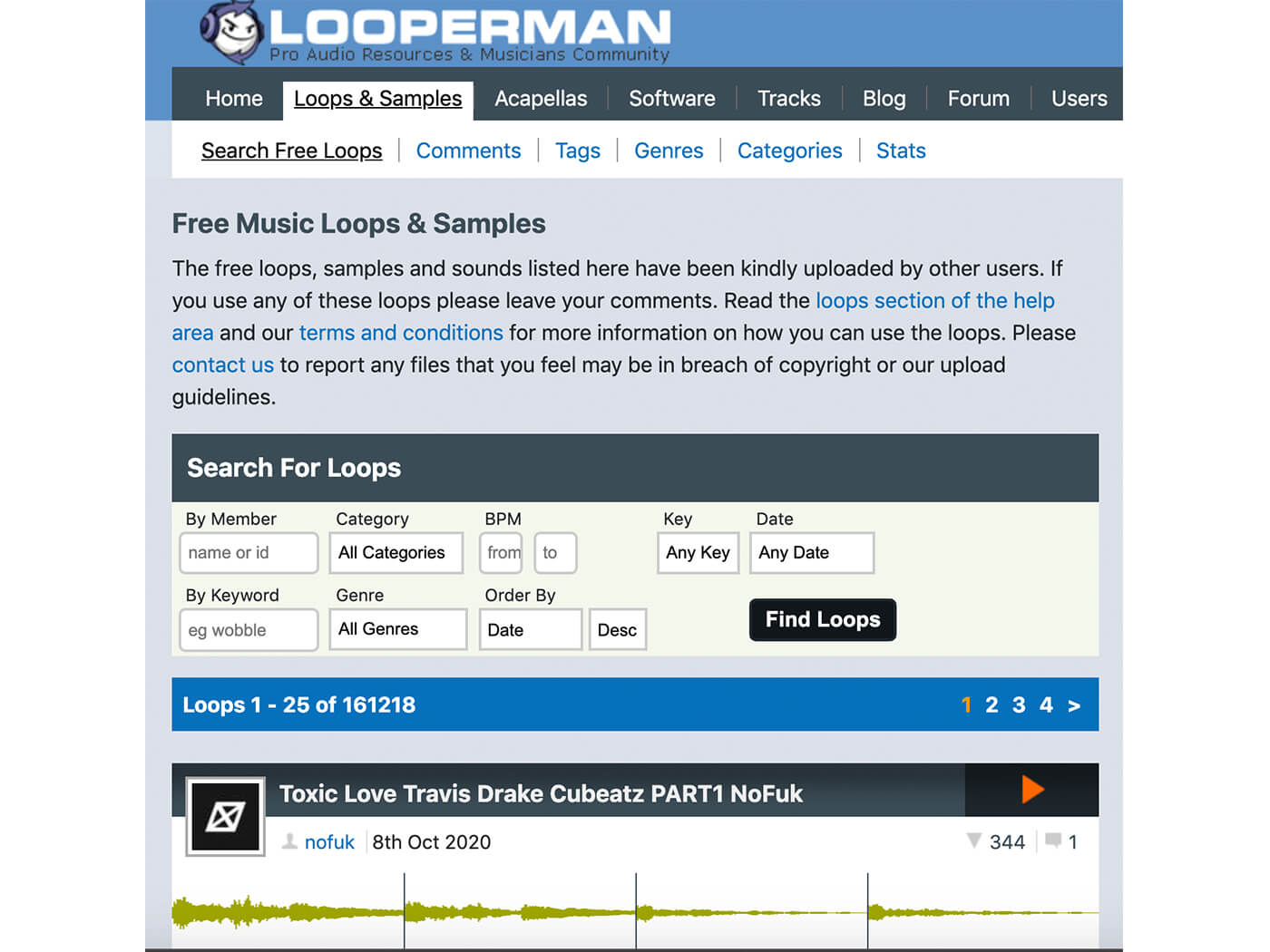 As with Freesound, Looperman is a resource built by the music technology community, with users uploading their own sounds for use by musicians, producers, sound designers and DJs. Its users have uploaded hundreds of thousands of loops, acapellas, spoken word pieces and sounds, all available for free. Because it’s all uploaded by users, just like Freesound, it may not be pristinely recorded, but you can certainly find some inspiration with a bit of digging.

Navigating Looperman is pretty straightforward. The menu bar along the top will let you choose from Loops & Samples and Acapellas, along with Software, Tracks and more if you’re on the hunt for some more free material. You can then use the search bar to locate samples by category, genre, keywords, key and more. Alternatively, just head straight down and browse through the samples that are presented to you, ordered by the most recent upload.