From sleeping on the studio floor to releasing hit albums with pop-rap sensation Lil Nas X, uber-producer Roy Lenzo’s life has enjoyed a triumphant arc, shaped by a love for music and creativity. Amid the acclaim and nods from the Grammy Awards, he thrives on cutting through the distractions of fame to establish personal connections with these A-list stars.

“You need to stay focused on making great songs with whoever you’re working with,” he advises emerging producers. “Otherwise, you can get caught up in the fame, particularly if you hold onto your best beats for a big artist when a great artist is sitting right next to you.”

Roy is well-placed to offer tips on attaining industry success with an ever-increasing list of accolades to his name. As co-producer for Lil Nas X’s and Cardi B’s 2019 collaboration Rodeothen the former’s 2021 debut album Montero, his studio work has raised the benchmark for contemporary pop. Versatility is at his heart, thanks to collaborations with notable hip-hop acts such as midwxst and IDK, alongside production duo Take A Daytrip, best known for trap artist Sheck Wes’ Mo Bamba. According to Roy, artists and audiences want a diversity of sounds and styles, making the 21st century an exciting time to be a music producer.

“Today, music is a blend of so many genres. Even in a rap record, you can have a Latin swing to the drums or melodies,” he says. “Anything is possible and I love being able to respond to this, to help guide artists and take them wherever they want to go.”

Brought up in Port Jeff Station, New York, Roy’s early obsession was dancing, then the pop hits of groups like NSYNC and the Backstreet Boys. He was initially into ballet, ballroom and tap before being exposed to the magic of music.

“I started off as a dancer and I guess that’s where my love for rhythm and creativity came from,” he says. “As I grew up, my cousin Frankie was the biggest inspiration as he was actually producing his own records.”

Roy saved up some money and invested in a Mac, then began the process of learning how to record, edit and produce using Garageband. Pop powerhouse Max Martin was an early guiding light as Roy started experimenting.

“I was always a fan of certain songs and later on realised that this was because Max Martin produced these tracks,” he says. “So I started to look up everything he’d worked on whether it was new or old, then tried to replicate it either in terms of sound selections or arrangements. His bridges were always amazing, so I tried to emulate them too.” 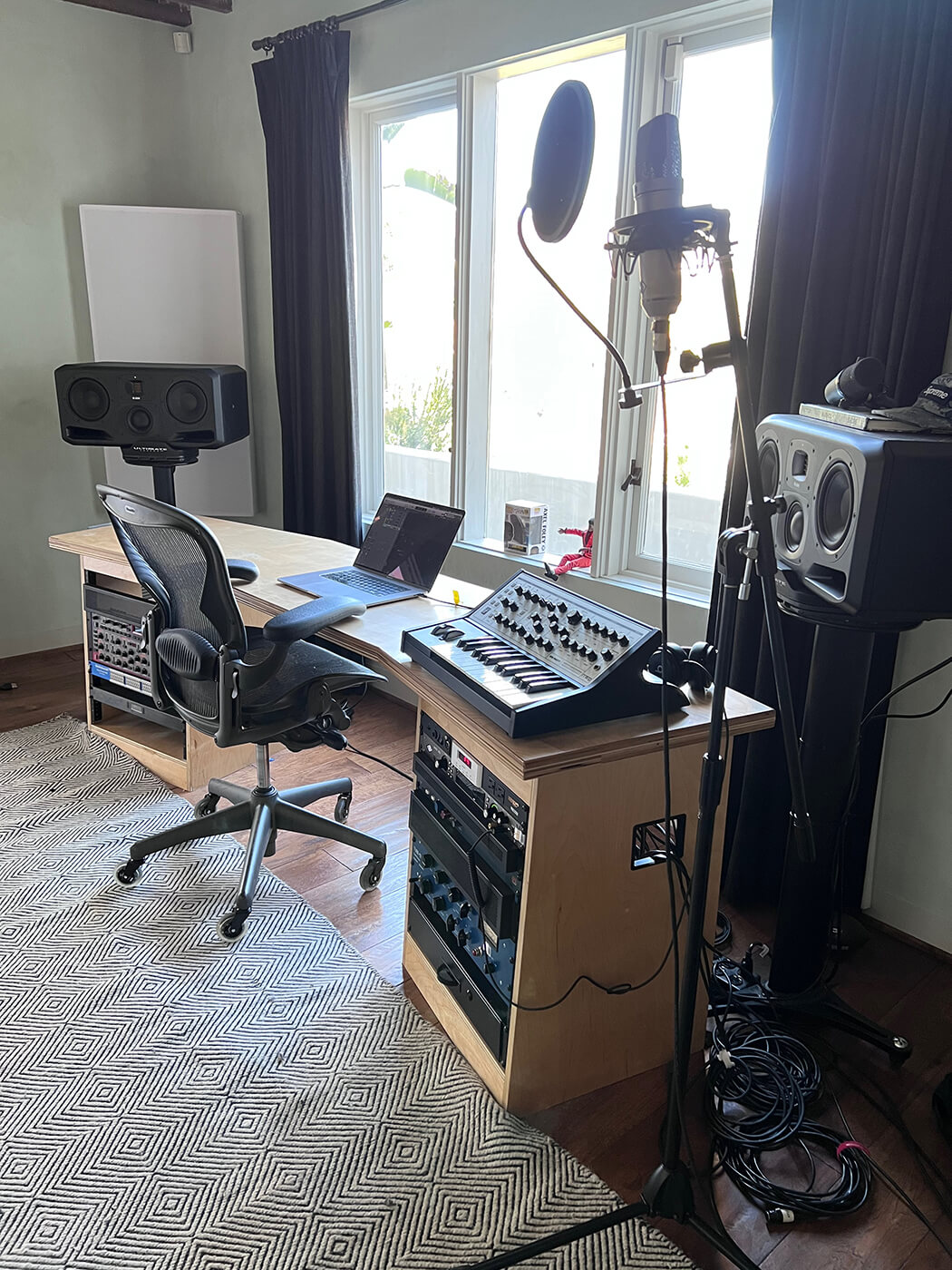 This approach opened up other different worlds from the Neptunes to Soulja Boy via Lil Wayne with Roy completely immersing himself in this mutli-colored assortment of inspiration and influence. He would watch videos on YouTube of tracks like Drop the World by Lil Wayne, then try to recreate them himself.

“Attempt to rework my favorite songs allowed me to really understand the intricacies of layering melodies and drums,” Roy says of this process. “The repetition allowed me to incorporate my own twist so it would eventually become a piece of original music.”

Dissecting his favorite songs in a granular way proved to be a major learning curve for him. It meant Roy had a deep understanding of each artist and the various elements they used to turn their ideas into fully-formed songs.

“It allowed me to hear music differently,” he says. “There are tons of things you don’t hear if you’re not paying attention. But if you do really listen, then you’ll be able to notice how a high hat is pitched or panned to the right or the guitars sound different. I thought it was really exciting to explore every nuance of these musical soundscapes.” 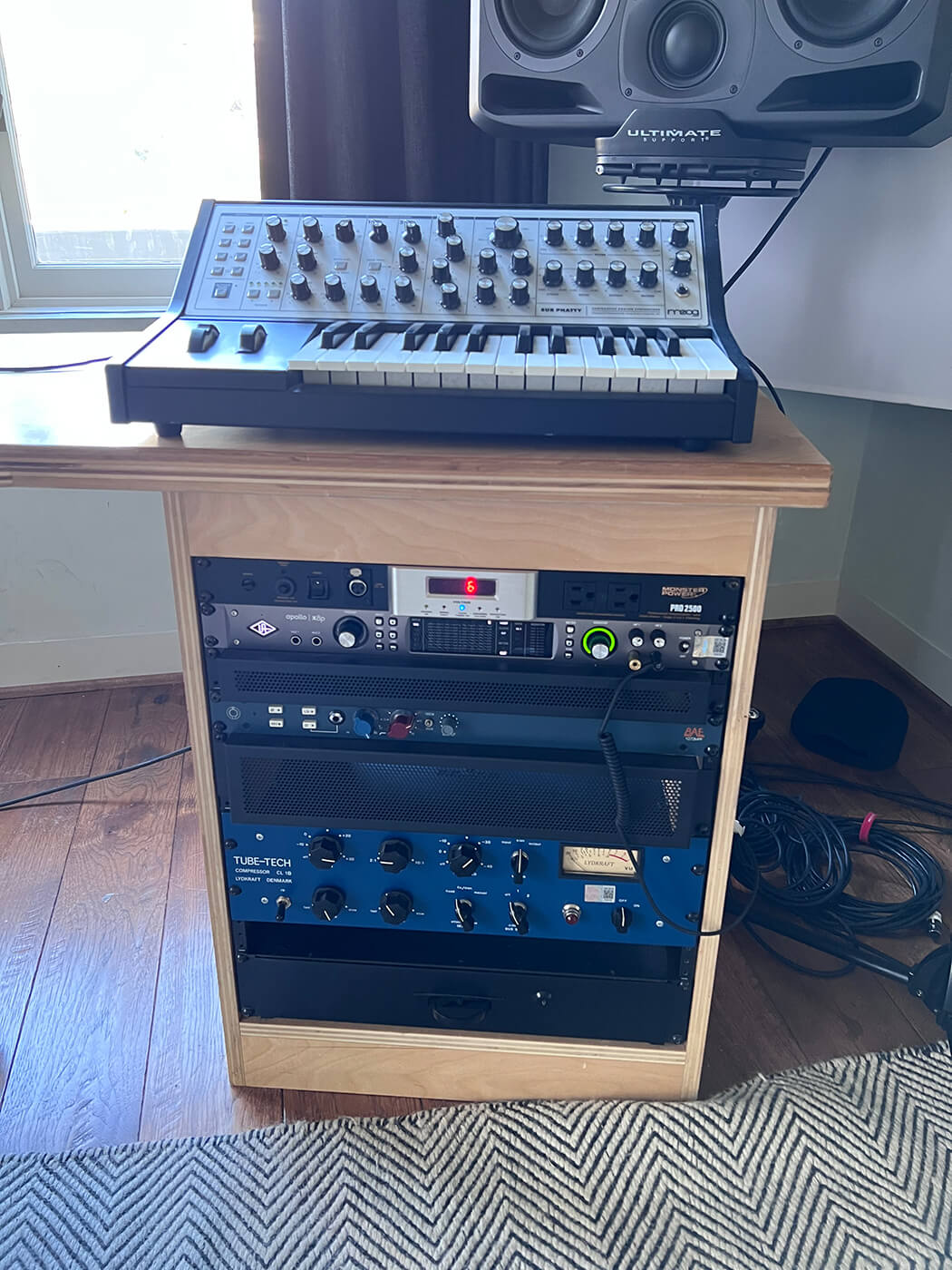 In the early days of his music career in New York, Roy worked hard to establish connections with new and emerging artists, attending live gigs and handing out business cards to get his name out there.

“I would go wherever I could find great artists to work with,” he says. “It wasn’t about money, just coming up with brilliant music, then hoping that more artists would want to work with me after they’d heard what we’d created.”

Fellow New Yorker Rockstar Payso was a hip hop act and an early collaborator during Roy’s initial forays in the studio. He first felt that their contrasting styles wouldn’t jell until he witnessed a live show from the artist.

“He was into loud and aggressive drums and I liked the smoother side of R&B,” laughs Roy. “But I went to a show and saw the crowd reacting to his music. It made me realise what you make in the studio and how it translates on stage can be two separate things.”

The pair set up a recording session and came up with the cold rap beats of Rockstar’s RS Life. It’s a track Roy feels helped elevate his musical abilities to the next level.

“It definitely changed how I thought about rap music, how to include these little moments that need to happen in the song to get a crowd going and amped up,” he explains. “From there I’ve developed a greater understanding of music making and where the sonics need to go.” 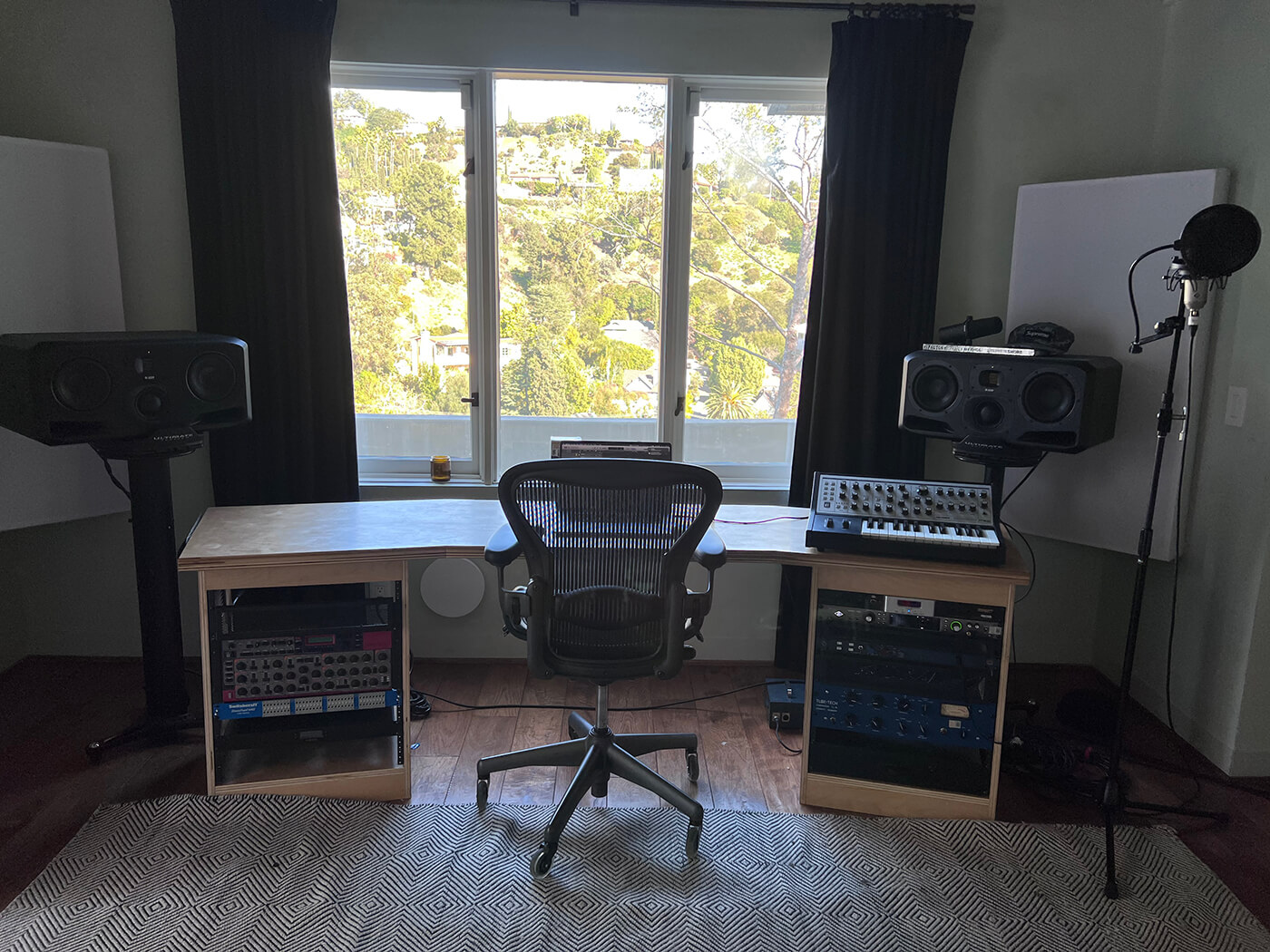 Roy’s fruitful creative relationship with Lil Nas X has helped him clock up his list of awards with his work on the Montero album. Montero (Call Me by Your Name) is the record’s lead single and reached Billboard’s top spot alongside receiving nominations for Record of the Year, Song of the Year and Best Music Video at the 2022 Grammy Awards. He ended up collaborating with the star via his friends and co-producers, Take a Daytrip.

“I’ve learned so much from them,” Roy says. “Not only about how they make records but how to ensure artists feel comfortable in the studio too. It gave me a huge boost when we started producing and engineering together.”

His friends initially worked on a recording session with Lil Nas X in Los Angeles. Then, when the star was passing through New York, he stopped off to see them. Roy joined them and they immediately hit it off. 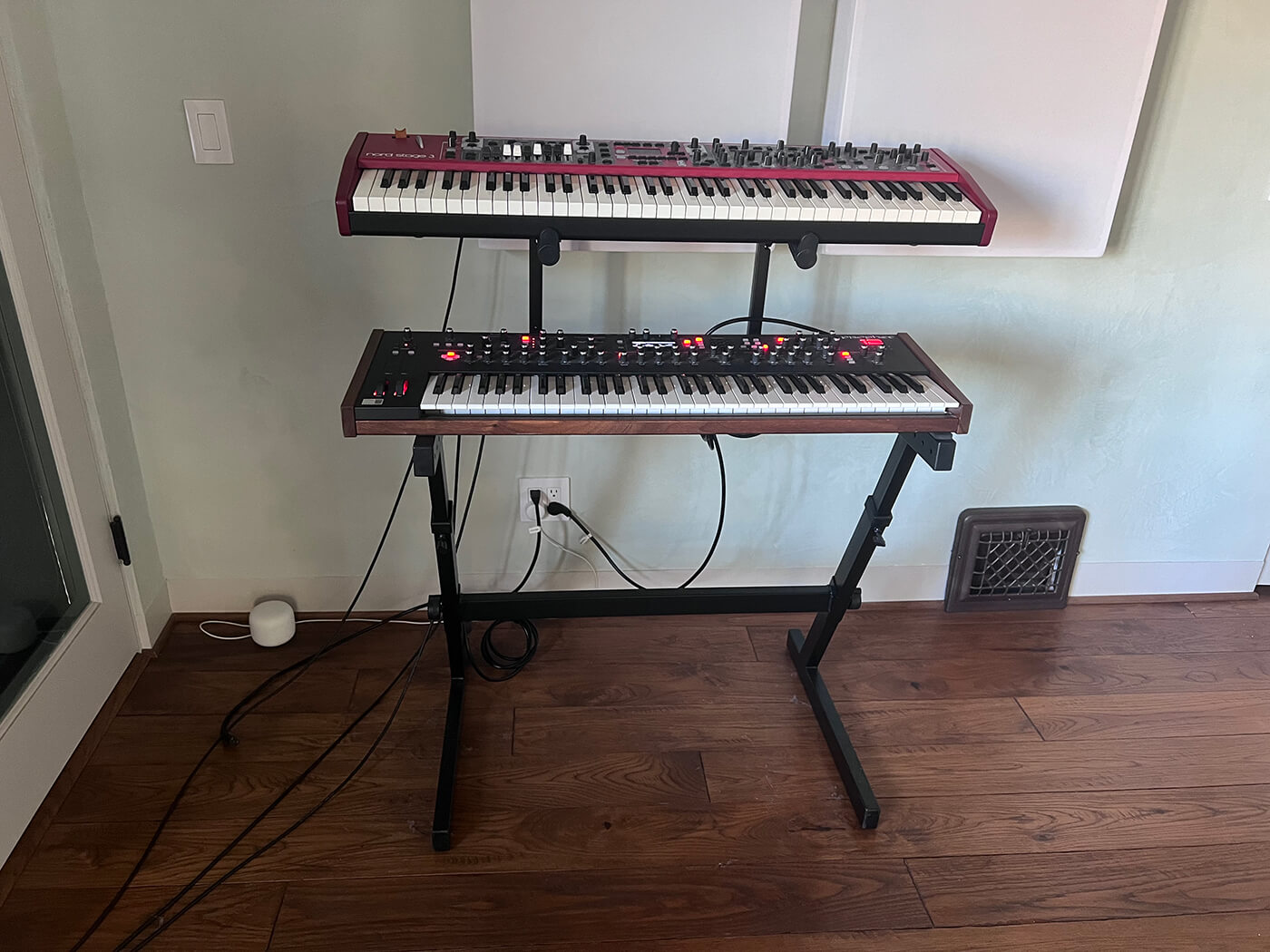 “The first day we ever met was when we made Rodeo,” he says. “We just clicked immediately as our whole crew’s approach in the studio is around making fun of each other and he fit right in. It’s all about the relationship, energy and vibe. If you don’t get along well with people, then it’s really hard to make great music with them.”

According to Roy, Lil Nas X is a great producer himself and usually has a vision for what he wants from his music. It is down to the rest of the recording team to act as enablers to help him reach this final musical destination as smoothly as possible.

“We’ll usually be on keyboards jamming while he does melody runs on the microphone,” Roy explains. “He likes to pick out the structure, the hook, pre-chorus and verse. From there, we’ll try a bunch of tones, sounds and layers. It’s fascinating, he has an incredible ear and timing. We’ll be working on something and he’ll notice a high hat might be moved. He’s incredibly meticulous.”

As a pop-producer, Roy’s route into a track is understandably driven by writing strong melodic hooks, then building a structure around them. As long as the melodies have solid foundations, then the rest of the song can run off them.

“I like to play keys, come up with a chord progression and anything that will spark something melodic for the artist I’m collaborating with,” he reveals. “Once we have some sort of format, then I’ll build drums while they come up with lyrics. But I don’t like to go too far without the words. They are really key in dictating the mood of a song and I want it to feel cohesive and authentic.”

Part of Roy’s skill as a producer is to be adaptable to help facilitate what the artist wants to tease from their music. He likes to work rapidly, then dial in on specific parts of a track to ensure the production sits well with his collaborator.

“The start is a quick process, that’s when ideas are flowing and you’re not thinking, you’re feeling and behaving instinctively,” he states. “But I’m all over the whole music-making process. I enjoy every aspect and finishing records is always gratifying. Sometimes the hardest part can be finding the end as there are always a million things you can do.”

One of Roy’s most recent projects is with artist US Bankrol Hayden. Bankrol usually works within the musical world between hip hop and trap, but came to Roy with a vision to make a more pop-leaning record.

“He’s a very talented singer and wanted to make something that was vulnerable, which is the complete opposite of his past output,” says Roy. “The challenge was how to take an artist completely out of their comfort zone and create something brand new that they would still like. I can make pop music all day but if an artist is not used to that, then you need to be able to guide them, and advise them on how to sound. Ultimately, it was an amazing and beautiful process to see an artist push themselves in this way.”

Since the success with Lil Nas X and Take a Daytrip, Roy has continued to further his musical relationship with them alongside projects with the likes of alternative R&B stars Jessie Reyez and Sabrina Claudio. The future for Roy looks dazzlingly bright but he believes this stems back to his relaxed, yet flexible approach to production and creativity.

“In the studio, I’m a Logic person but I know ProTools and this is something new producers need to remember,” he says. “Different pieces of gear are good to get your head around as you never know what situation will come and you always want your sessions to run smoothly.”

Alongside this, Roy’s final tip is for aspiring producers and artists to embrace as much as they can when trying to get the best out of a recording session. Leaving no creative stone uncovered means you won’t miss out on any opportunity for success.

“Try everything and anything,” he says. “And don’t be afraid to fail in sessions. I used to be down on myself if a session didn’t go well but I realised that learning from my mistakes is one of the biggest parts of it…”