Apogee’s Duet set the standard for top-quality portable audio recording. The company implemented its experience in making high-end studio outboard into a compact interface that slips easily into your backpack. As laptops have become more powerful, musicians and producers increasingly want to pair them with no-compromise recording hardware. The third generation of Duet represents the apogee – if you’ll forgive the pun – of this.

The unit is phenomenally well-built with a high-grade feel despite its form factor. It uses a breakout cable to establish audio connections, using two instrument inputs, two mic/line inputs and two balanced outputs. At the Duet end, it uses a proprietary cable to connect, which keeps the body incredibly thin. Some people won’t mind the cable at all and others will find it a little untidy compared to the sleek design of the Duet itself. Unfortunately, this is the only way to get full-sized audio connectors on a unit this slim.

Apogee also makes a dock for the Duet 3 at a price of $179/£149 and, as well as holding the Duet firmly in place and raising it at one end, this duplicates the I/O in a more manageable way, providing a conventional , flat panel with the relevant ports. It’s a neater solution and ideal if you plan to use the Duet on a desk most of the time rather than carrying it around.

Audio is sent to and from your Mac, PC or iPad Pro using USB-C, and there’s a USB-C to USB-A cable provided – although no USB-C to USB-C cable, which is disappointing at this price. It powers over the USB connection, too, with any recent computer able to supply the required power.

A second USB-C port is also included for you to run power in from an adapter, say an iPad Pro power supply, with sufficient wattage. This capability comes thanks to a recent software update so if you happen to have a first release model it’s necessary to download the latest app update and run the firmware updater. This update also adds a couple of other features to the initial release including a 5dB louder headphone output when using dedicated power, display of volume and level on the LED meters and 96KHz operation when used with an iPad Pro. To achieve the higher headphone output level you need to supply at least 15W of power.

The Apogee Control 2 app is where you manage the interface’s settings. Though a couple of functions are available on-body by pressing and turning the volume knob, you get far more control in the app. As well as channel linking, levels, pan and sensitivity settings you can configure the behavior of the hardware dial to control headphone or master outs, the brightness of the lights and more. The hardware dial also has a stepped design, giving gentle, reassuring click feedback as you turn it.

The app is also how you access the Symphony ECS Channel Strip plug-in that runs on the Duet’s onboard DSP processor. Powering from the hardware enables you to use this while recording with no latency, and it offers straightforward compression and EQ tuned by mixing legend Bob Clearmountain, together with a bunch of useful presets. It sounds professional and the ability to tune and control your recordings as they pass through Duet means no extra load on your other hardware, which is particularly useful for devices like iPad Pro where CPU is at a little more of a premium. 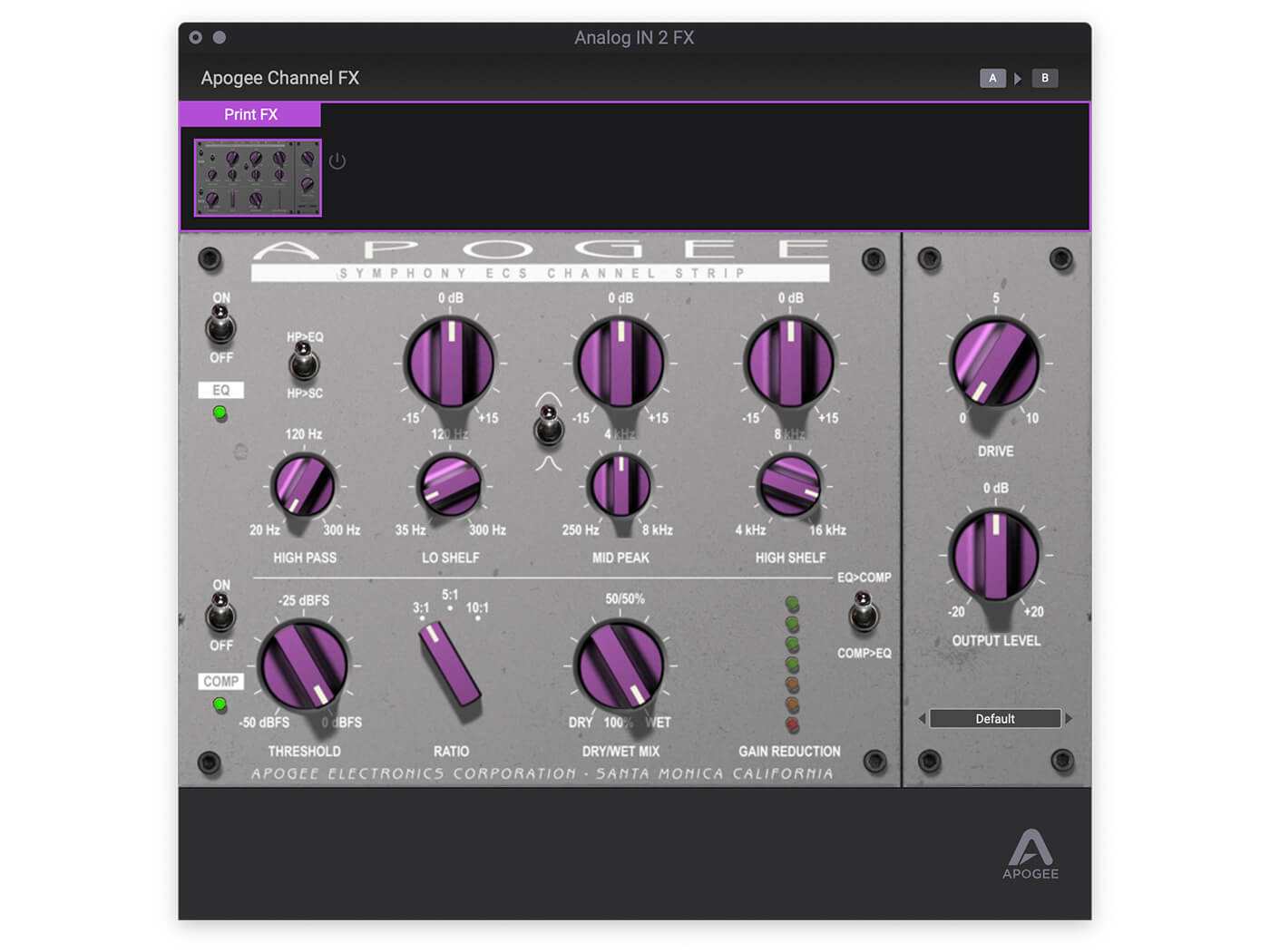 If you want to use this plug-in inside your DAW and not print the results during recording, you’ll need to make a separate purchase of $99. This is a shame, given the high price tag of the Duet alone. Apogee is developing an update to its iOS control app to be released soon that will bring full duet editing capability to iPad.

Internally, Duet uses Apogee’s custom AD/DA converters and pristine analogue circuitry, providing two capable preamps of delivering phantom power with +65dB of gain. It can record at up to 192kHz at 24-bit, which is remarkable for a unit this compact, and testament to the high-end design and build of the unit. Noise and distortion were very low, even when record levels were cranked right up, and audio capture was clean, crisp and reliable. The headphone output is 3.5mm on-body or quarter-inch if you use the dock, and zero-ohm, letting you create a dedicated headphone mix in the app. 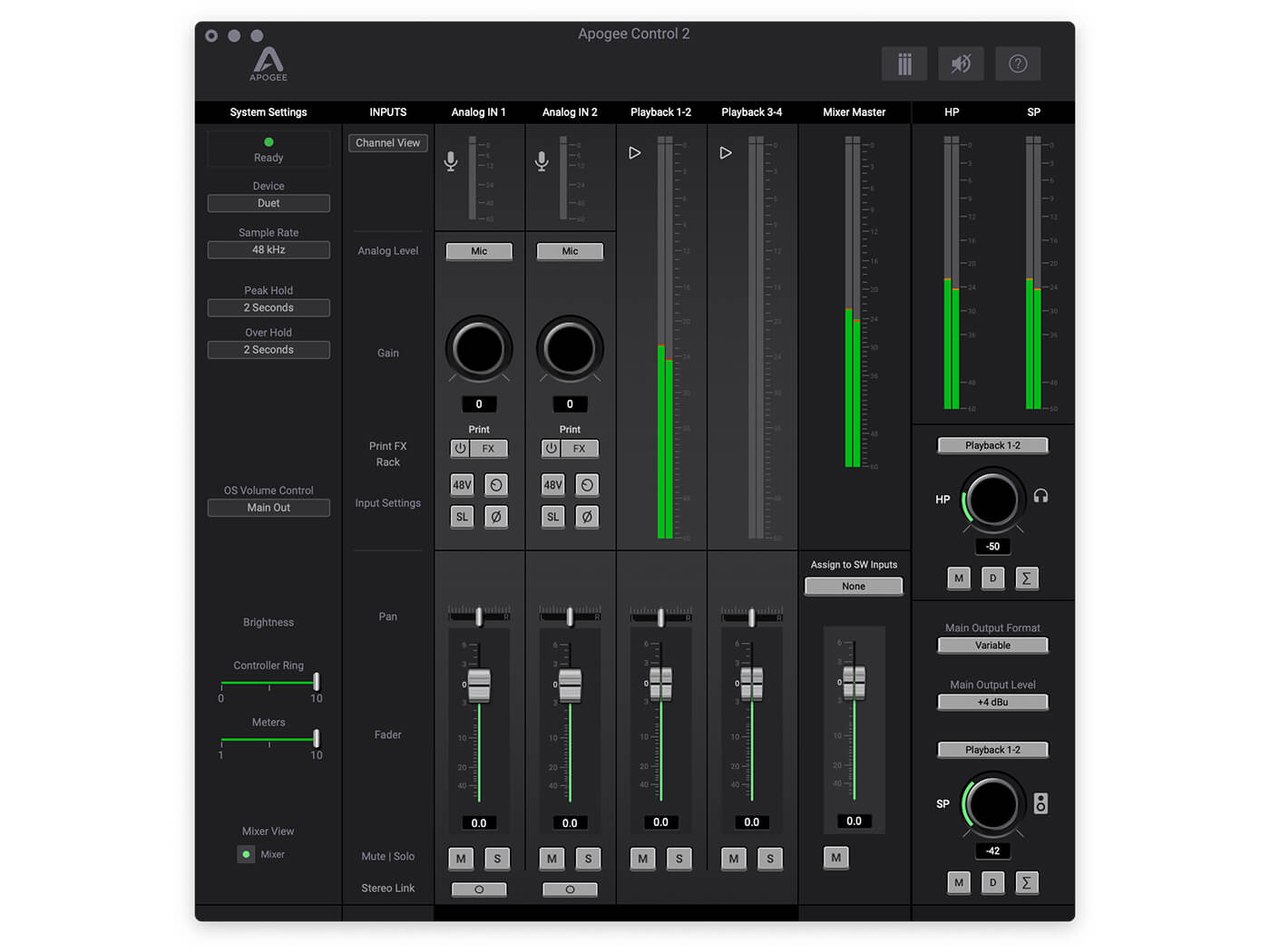 Apogee points out that the Duet 3 is the result of “decades of innovation,” and this definitely shows. It’s superbly designed and offers stunning results when recording and monitoring clarity. It’s astonishing that it can do all this plus power its own onboard channel strip with zero latency. Some design decisions have been made to keep size and weight at an absolute minimum – there aren’t many on-body controls, however, visual feedback is good thanks to backlighting. Most routing and setup is done via the Apogee Control app which is fair enough since it’s going to be connected to your Mac or PC anyway for recording. And, as software control panels for hardware interfaces go, it’s well put together and straightforward to understand and use.

There are many other 2×4 interfaces on the market, though few with the combination of onboard DSP and bus power. The Duet 3 is more expensive than the vast majority of them but offers superior performance for the most demanding producer. In short, its supreme portability does not mean any tradeoffs in terms of quality or fidelity. You would want to be doing some serious recording to make this kind of investment, but if quality and portability are paramount to you, it’s an excellent way to get the best of both. 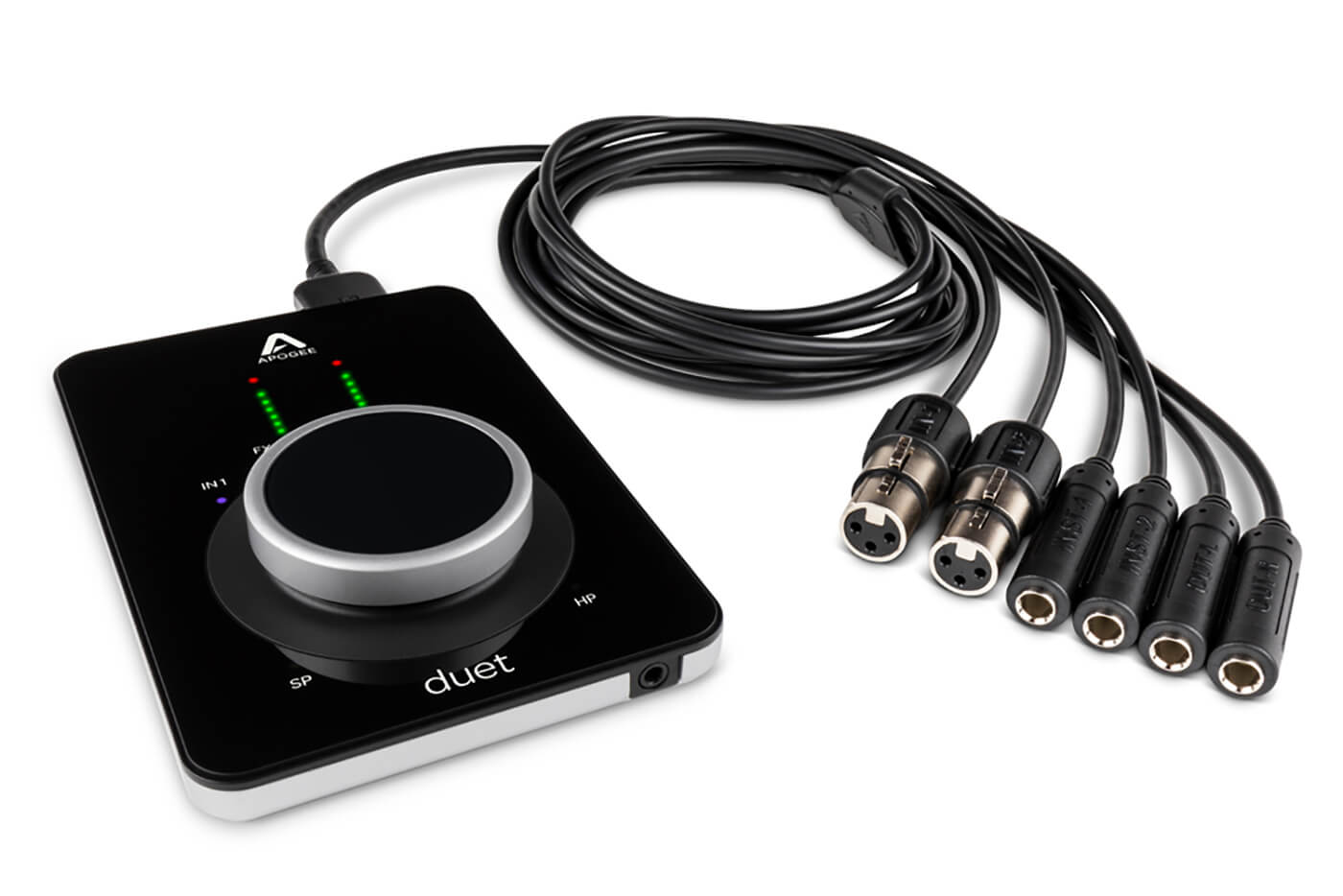