So – you have your studio up and running and you’ve been happily working in the box, making the most of what your DAW and soft synths have to offer. But you find yourself watching synthesizer demo videos on YouTube and wondering, ‘should I buy a hardware synthesizer?’ We’ve all been there.

Before you hit the buy button for any old thing with knobs and sliders, it’s probably best to slow down and consider what you really need.

There are seemingly as many different synths on the market as there are stars in the sky. How do you decide which one is best for you? In this guide, we’ll walk you through the sometimes bewildering amount of differences, from format to connectivity, synthesis type to polyphony, and throw in a few recommendations along the way.

What is a synthesizer?

The definition of a synthesizer has expanded since the word was first coined almost seven decades ago but, essentially, it’s an electronic instrument that creates audio, often musically and usually with waveforms, either by generating them or playing back sampled ones.

It’s different from a piano, which is entirely acoustic and uses physical components to create sound, or an electric instrument like a Rhodeswhich amplifies audio created with physical means.

Before buying a synth, it can be helpful to know what synthesis type you want. Synthesis can mostly be divided into two halves: analogue and digital. Analogue is largely subtractive, with an oscillator’s output passing through a filter. The quintessential subtractive synths include early Moog synths, Sequential’s Prophet family, and Roland’s classic Junos and Jupiters.

The digital side is extremely varied, from virtual analogue to FM (frequency modulation) to physical modeling. The one you go with may be dependent on your chosen genre. If you’re just getting started and are looking to get your head around basic synthesis, a subtractive analogue synth is the way to go.

The next step is to decide whether you want a new or second-hand synthesizer. A new synthesizer will be in perfect working order and covered by a substantial warranty but a used instrument could offer savings. This won’t apply to a classic synthesizer though, which will likely have a price tag reflecting its cache among collectors.

Vintage synthesizers can require maintenance, upkeep and sometimes expensive repairs so that’s worth keeping in mind as well.

Polyphony and monophony: How many notes are enough?

Musicians coming from pianos or electric keyboards may be surprised to learn that synthesizers won’t allow you to play every single note at once. Due to technical limitations, they can only play a set number of notes at a time.

The earliest synths were monophonic, meaning they only output a single note no matter how many keys you pressed down. Polyphonic synths can play multiple notes but the number of voices – the actual note plus accompanying filter and envelope stages – differs depending on the instrument.

Typically, monophonic synths are good for bass and lead instrument duties, while polyphonic synths can handle pads and chord parts. If you’re a two-handed chord player or you favor complicated jazz phrasings, you’ll want to make sure the polyphony count is robust enough.

There’s more to a synthesizer than just notes. Many have exciting and useful extras that add value and help elevate the playing experience.

Sequencers are fairly common for modern synthesizers, as are effects, with everything from reverb and delay to distortion and chorus available. You may also come across functions like chord memory, randomisation to aid in programming, and even patch points that transform the instrument into a semi-modular sound design machine.

These extras are often more than just add-ons and are part of the parcel of the character of the instrument. They can also add to the overall cost. How important they are to you, though, depends on your needs.

Do you have enough space in your studio for a large instrument? You’ll want to consider the format of the instrument before buying. The most common arrangement for a synthesizer is rectangular with a set of keys, although even within these constraints there are a number of variables at play.

The first is keyboard length. A full-size keyboard has eight octaves and 88 keys. However, it’s rare for a synth to have a full set of keys like a piano. They can range from as small as a few octaves on up, with many synths settling on 44 keys. Key size can vary as well. Many have full-size keys while some have mini keys. You may even see ones with special, capacitive touchplate keys, as with Arturia’s MicroFreak.

If you don’t have the space for a synthesizer with keys, or already have a MIDI keyboard controller, why not consider a desktop unit? Plenty of synthesizer models come in multiple formats, with desktop being a popular alternative. These are functionally similar (if not identical) to keyboard versions, just without the keybed. They are often more affordable, too. If you happen to be looking at vintage synths, rackmount rather than desktop was the popular alternative format in the late 80s and 90s.

One of the advantages of buying a synth with keys is that you can use it as a MIDI controller for a DAW and software or other hardware synths. Modern MIDI keyboard controllers usually have all of the things that a synth does – keys, knobs, sliders – just without the built-in sounds. They can be pricey too, with quality ones often costing as much as an actual synthesizer. By using your synth as a controller, you’d be killing two birds with one stone.

One final format is Eurorack modular. While this is an entirely separate offering from basic synthesizers, some manufacturers are now Eurorack versions of some of their instruments.

Synthesizers communicate with your DAW or hardware sequencer with MIDI – musical instrument digital interface. This allows you to send information such as notes, parameter changes, and performance data between them.

MIDI is typically transmitted via one of two kinds of cable: dedicated five-pin DIN MIDI cables or standard USB. Some synthesizers can accept both; others may have only one. USB is certainly the most convenient as your computer already has USB ports but it’s not ubiquitous, and older gear won’t have it. In that case, you’ll need MIDI ports, either as part of an audio interface or via a dedicated MIDI interface.

Another factor to consider is audio connectivity – how does the sound get from the instrument to your computer? The standard way is through audio cables. For this, you’ll need an audio interface. Some modern synths offer USB audio, allowing you to transmit in some cases multiple streams of audio over USB to a DAW. This is extremely useful but far from standard.

Below are some of our recommendations for specific genres. These are subjective, of course, but will offer a reliable starting point for your preferred production style. 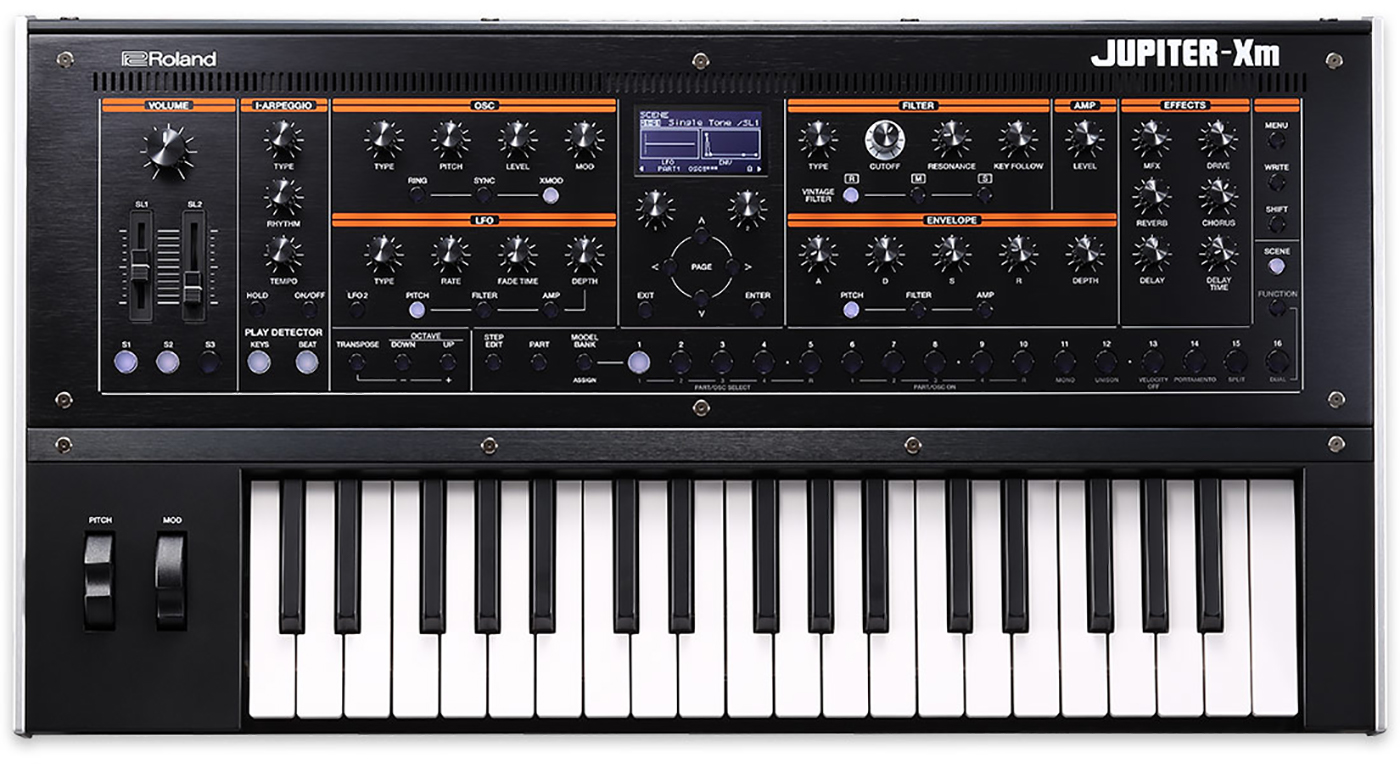 For the EDM producer who needs access to everything from bread-and-butter sampled instruments to classic synthesizer tones, Roland’s Jupiter-Xm is a solid fit, with emulations of the Jupiter-8, Juno-106, SH-101, and JX- 8P, plus waves from the XV-5080. It’s not cheap but there’s very little it can’t do, and it sounds gorgeous all around. 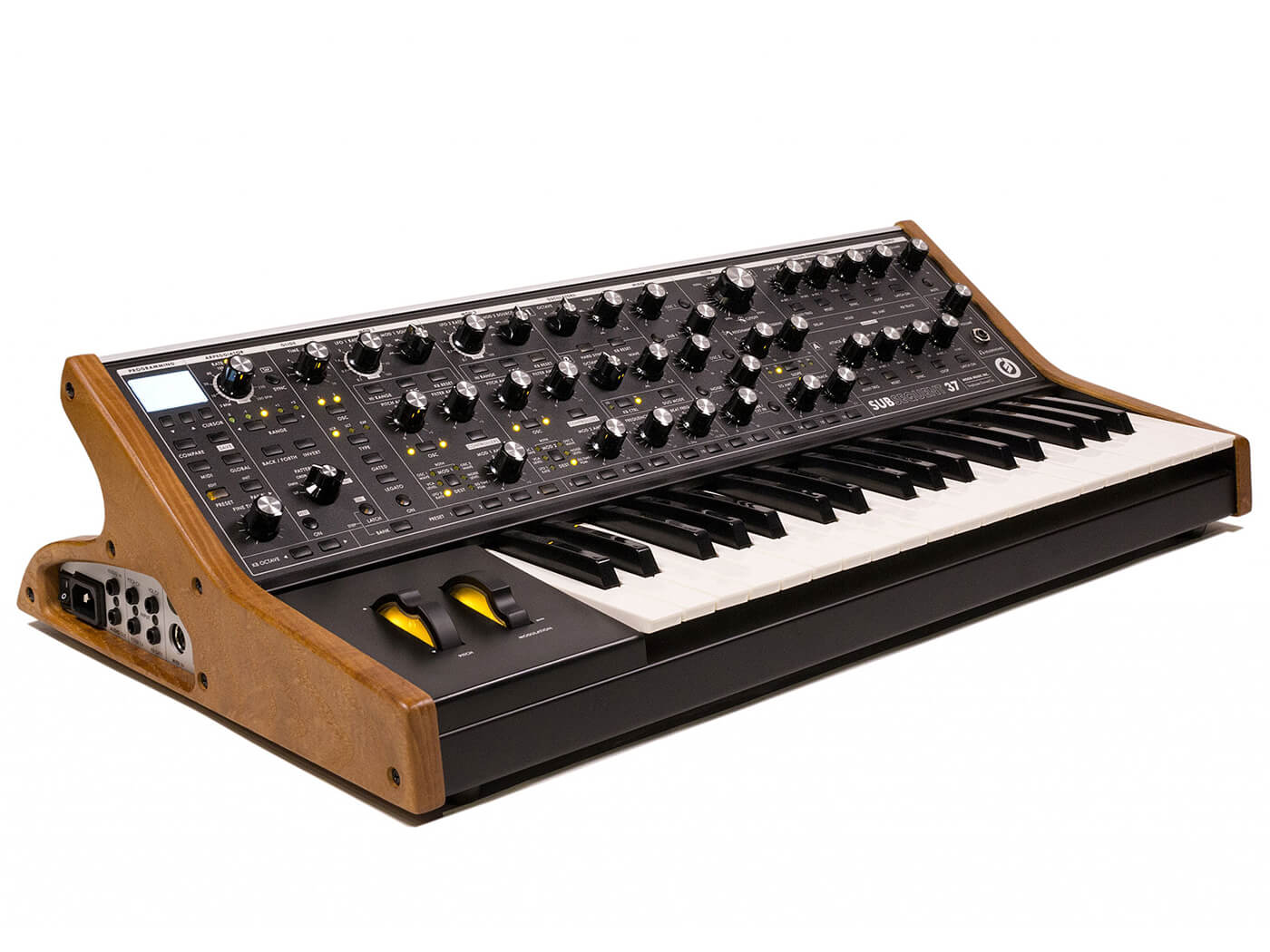 Bass music producers need a synth that’s all about that bass. Moog’s synths are famous for their glorious low-end power; it’s a match made in heaven. The Moog Subsequent 37 is a duophonic (two-note polyphonic) analogue synthesizer capable of doling out plenty of phat basslines. Downgrade to the Subsequent 25 if the price tag is scaring your wallet. 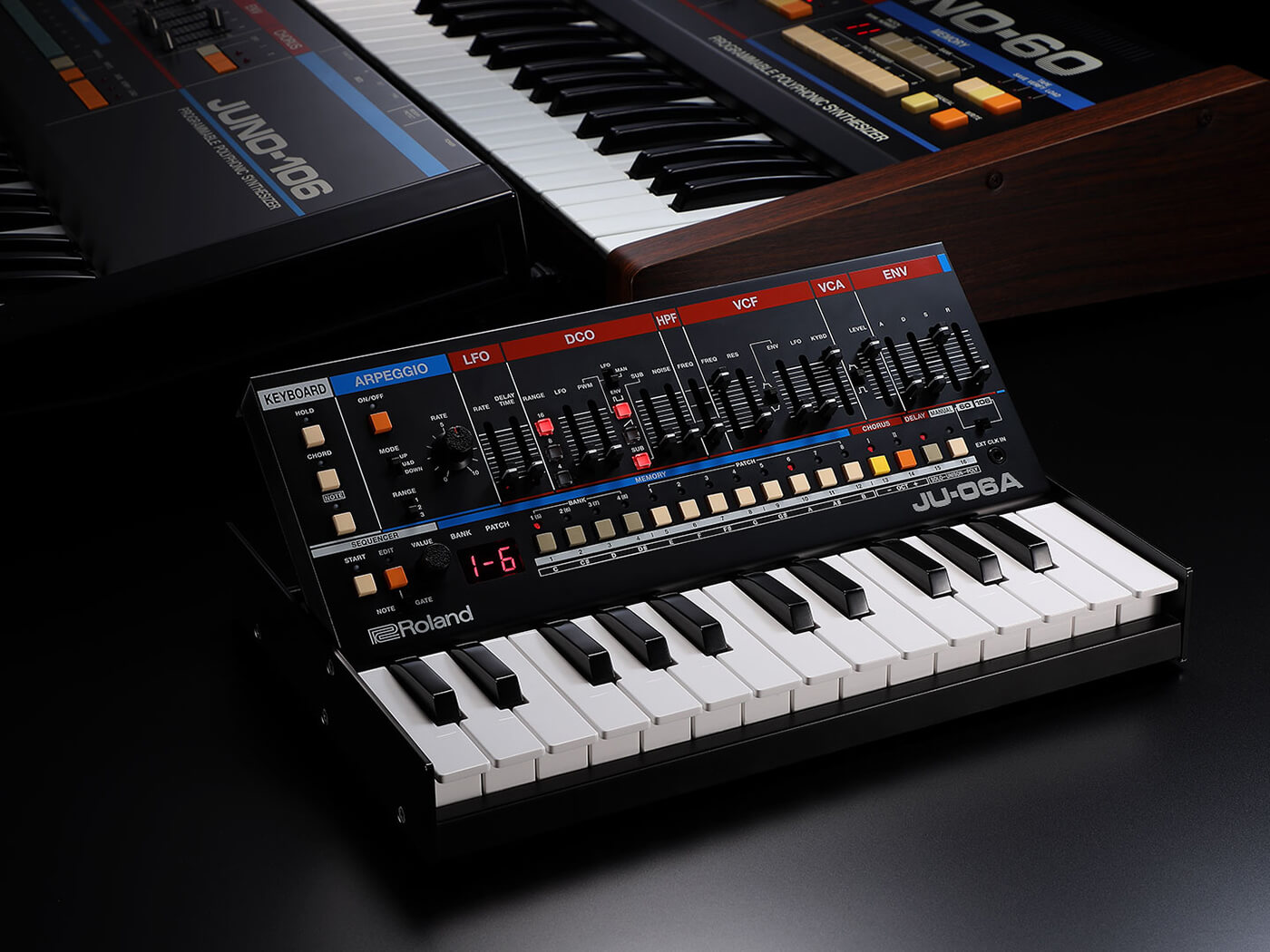 This modern virtual analogue synth of Roland’s Boutique line gives you two synths for the price of one – It’s got four-voice emulations of both the Juno-106 and Juno-60. The original synths are coveted for their clean sound and massive sweet spots, and have become particularly popular with indie bands for the way they mix well with guitars. Add the optional K-25m keyboard dock if you don’t have a controller to hand. 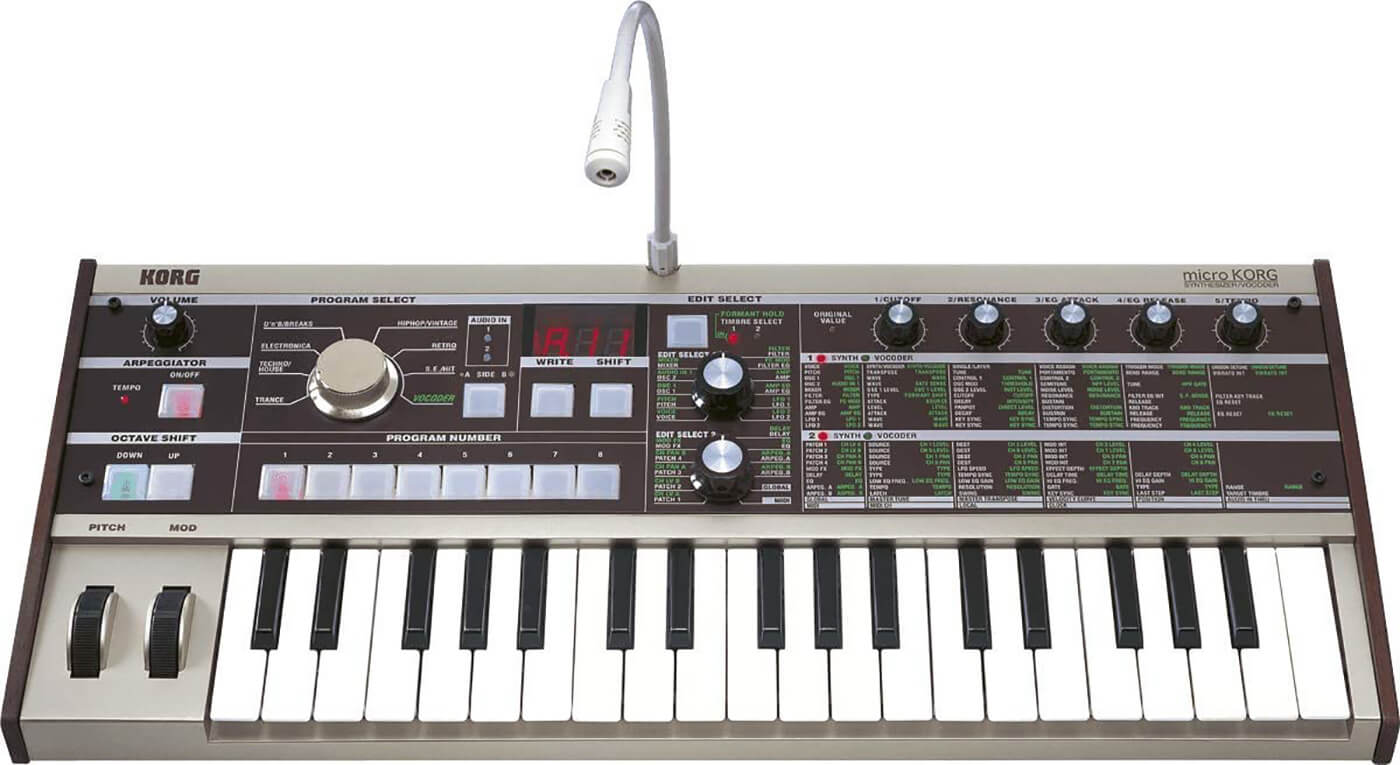 Korg’s diminutive MicroKorg is one of the best-selling synths of all time. It debuted in 2002 and is incredibly still in production. This four-voice polyphonic virtual analogue instrument can perform a wide variety of sounds and even has a built-in vocoder for robot voices. It’s been used by J-ROC, Pharrell and tons of other high-profile producers. And it’s cheap as chips. 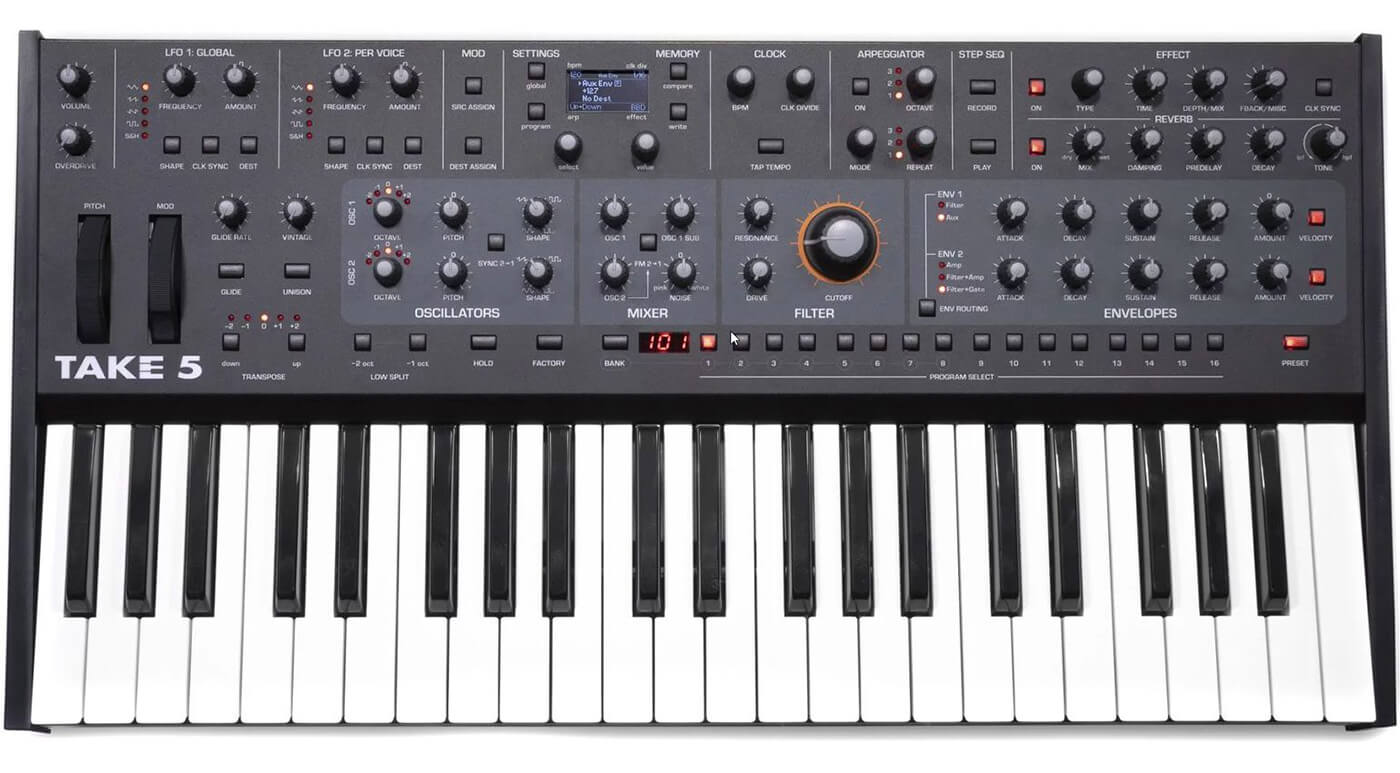 Sequential Circuits’ groundbreaking Prophet-5 synthesizer helped fuel the sounds of rock, post-punk and new wave through the 1980s. What better way then to bring some synthesizer power to your rock band than the Take 5, a modern (and relatively affordable) instrument from the same man, Dave Smith, with some Prophet DNA inside. Level up to the Prophet-5 re-release if your tax return is bigger than you expected.