Hot on the heels of Dreamsynth, California-based developer Cherry Audio continues its onward march in developing affordable virtual synths, this time with a recreation of a bona fide classic. Minimode is based on Moog‘s classic Minimoog Model D, introduced in 1971 and a staple of myriad musical genres from funk and rock to EDM.

You won’t be surprised to learn that original Model D hardware models are stratospherically expensive – even the 2016 reissue is hard to come by – making it a prime candidate for emulation. It’s not the first – Arturia’s Mini V3 is £128 and Moog’s emulation for iOS a mere £6.99. But Cherry Audio’s £48 Minimode (with an intro price of £32) is among the most affordable fully featured Model D emulations for your desktop DAW.

The developer uses the same container system here as in its other synths, so if you’ve used one before it should feel familiar. A settings section contains easy-to-understand options and there’s a helpful way to remember MIDI mappings for new instances of the plug-in either globally or per-preset, useful for when you’ve created custom CC assignments via the pop-out MIDI window. MPE is fully supported too, for advanced control from an MPE-compatible device, and there’s global undo and redo to step back and forward with edits.

The plug-in’s window is freely resizable and also features a Focus mode that zooms in on the interface and lets you scroll around. It’s convenient, though the synth’s relatively compact layout compared to others in the Cherry family means that it’s already easy to navigate without having to do this. Up to 4x oversampling is also available.

Layout-wise, you’re in the same arena as the original Model D – for the most part, the developer has opted not to add lots of extra features like effects. The major exception is that you can choose between having 1, 2, 4, 8 or 16 voices at once, making it sufficiently polyphonic for more flexibility.

You start with three oscillators modelled on the originals. Each features triangle, sawtooth-triangular, ramp sawtooth, square, wide rectangular, and narrow rectangular waveforms and a range control, with oscillators 2 and 3 also having frequency dials. The controller section has a master tune dial and glide control, as well as a modulation mixer dial.

The mixer section lets you balance the levels of the three oscillators or turn any of them on or off, with volume values ​​over 4 causing an oscillator to overdrive slightly in a pleasing way, as was a quirk of the original hardware. Variable amounts of white or pink noise can be mixed into the signal and there’s another interesting feature here in the form of a feedback/sidechain switch. 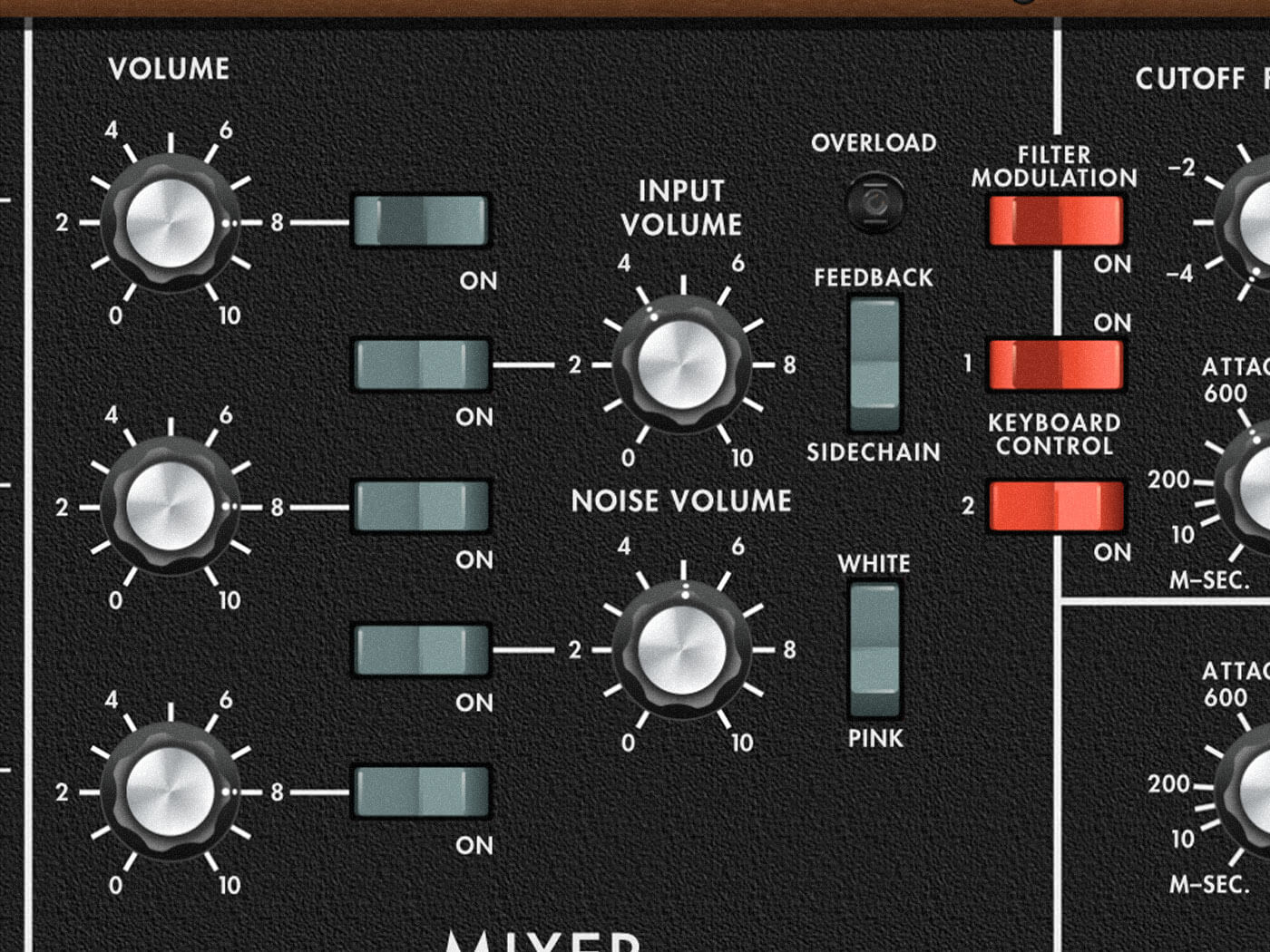 Feedback replicates a trick from the Model D, where running one of the synth’s outputs back through its external input jack could cause gritty feedback, and so it is here, only without cabling. Turn the input-volume dial up to hear the results. Used as a kind of effect, the sidechain option lets you run signals from your DAW through the Minimode’s filter and amp sections for shaping.

In the filter section is a recreation of the classic 24dB/oct low-pass ladder filter synonymous with the sound of so much electronic music of the era – particularly the filter sweeps popularized by acid and techno. It’s tremendous fun to play with and to automate, with various options such as filter modulation via the mod wheel and Keyboard Control mode, which causes the cutoff frequency to increase as ascending notes are played on a keyboard.

The Loudness Contour section provides attack, decay and sustain knobs for envelope shaping and, last but not least, are a global volume dial, limiter on/off switch and glide and decay on/off switches for further control.

You get more than 250 presets sorted by category and available via the familiar browser interface. Soft-synth presets usually make liberal use of reverbs and delays to spice things up but, as noted earlier, Cherry Audio has decided not to add an effects stage here, preferring to keep things true to the original, so you may want to add an effect or two in your DAW. 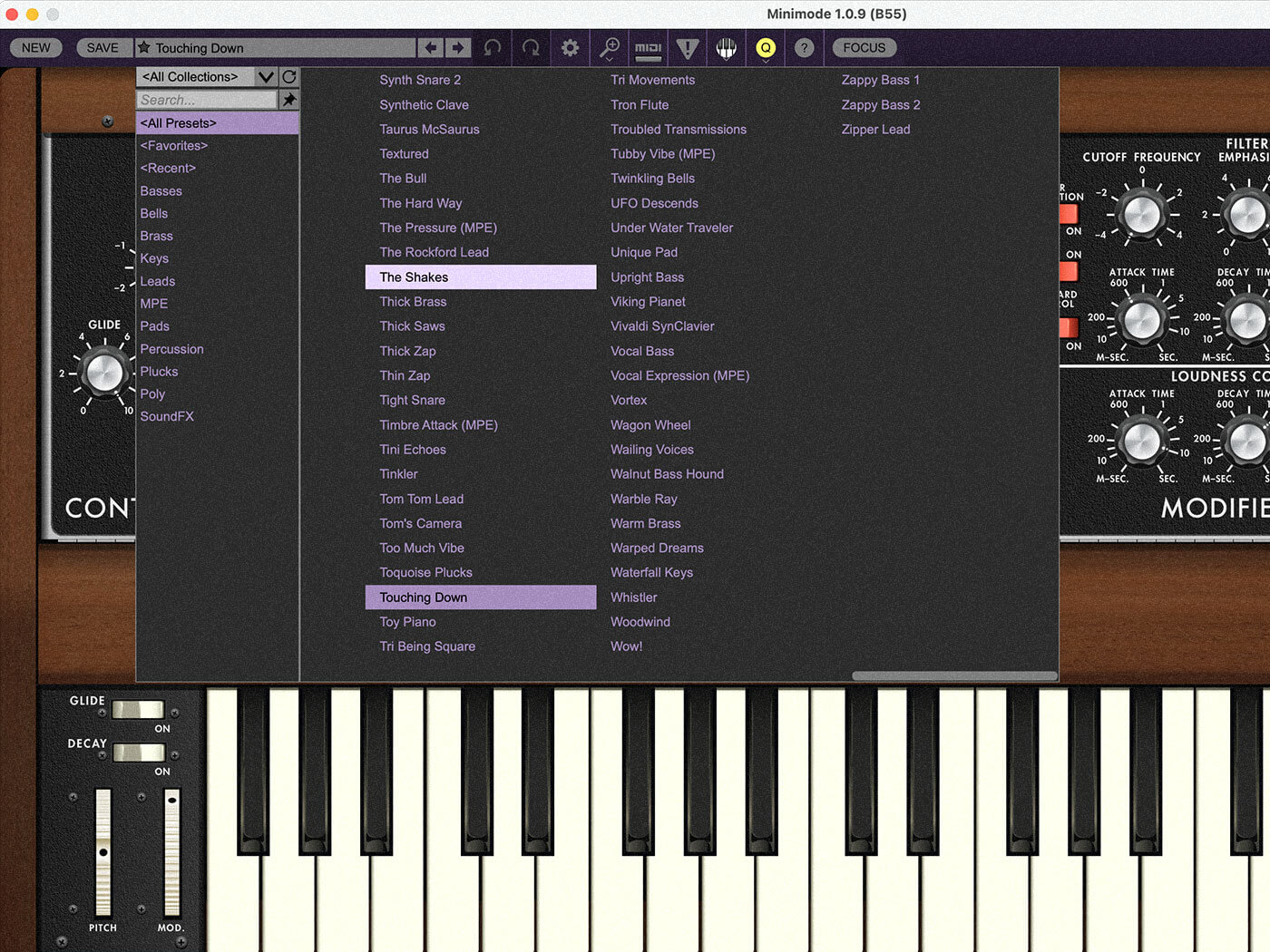 The omission of effects as part of the presets also means they’re true to the sound of the original Model D, showcasing the work that Cherry Audio has done in modeling every part of the hardware. There’s a very upfront quality to the sounds, from the classic fat basses that just ache to be filter-swept for that gorgeous acid sound to warm pads, spikey percussion and some cool sound effects that make use of modulation to create animated, bubbling sequences without the use of any actual onboard arpeggiator or sequencing tools.

Apart from the immediate usability of many of the presets, part of the appeal of this instrument is its straightforward interface and how quickly and easily it allows you to make changes. As on the real hardware, changing levels, detuning oscillators and tweaking filters involves just a few quick actions that can completely change your sound. And unlike on more complex synths, you don’t have to be an expert to do this since everything is laid out simply. It’s possible to fine-tune everything, of course, if you’re more than a perfectionist, but there’s plenty of fun to be had by just getting hands-on, as you would with a real Minimoog.

Cherry on the top?

Sonically, the Minimode and Arturia’s Moog Mini V3 are both excellent. But the V3 is more expensive and lacks the MPE support and feedback option of Cherry’s alternative. The Mini V3 does have other expanded features, including LFO and arp sections, a motion recorder, advanced modulation matrix and three built-in programmable effects, which arguably makes it more flexible for playing live in standalone mode. But it’s hard to ignore the Minimode’s price – and you get a lot of cool-sounding Moog for your money. There’s even a free demo if you’re still not sold.

Some of the links in this article may be affiliate links, meaning MusicTech may earn a commission if you make a purchase.