The original duo of two-way Alpha Evo monitors may have been joined by a larger 8-inch woofer model, the Alpha 80 Evo, but our attention has been taken by two rather different designs entering the fray.

The Alpha Twin Evo takes its cues from the excellent Twin6 Be, bringing the advantages of a horizontal three driver topology to a lower price point. These Twins possess a large footprint but are lighter than their size suggests. Though there is a slight ’empty box’ quality to them when handled, the enclosure does not produce any problematic resonances. The off the twin 6.5-inch Slatefiber drivers (recycled carbon fiber and thermoplastic polymer composite) and 1-inch aluminum inverted cone tweeter throw out a punchy, uncluttered reproduction of the source.

As a stereo pair the Twins are set as left or right via a rear mounted switch so that the inner pair of drivers cover the mid frequency range, with the outer ones pushing the low end. These bass ported monitors are what Focal refers to as 2.5 way – three drivers powered by two amplifiers, or almost three-way. This provides 50W per mid/low frequency speaker which, in practice, is plenty for small to medium sized studio spaces. At sensibly loud settings, the Alpha Twin Evos do not struggle to bend the air to their will.

The rear panel control set features the essentials: switches for sensitivity (0dB/-6dB) and auto standby, and a pair of shelving EQs. The HF and LF shelving provides ±3dB above 4.5kHz and ±6dB below 250Hz, which is gentle yet effective for adjusting to the acoustic environment. In a fairly neutral studio room, there is no need to cut or boost with either EQ, though there can be a subjective impulse to do so.

From top to bottom, the Alpha Twin Evos sound crisp, phase coherent and satisfyingly flat. The mid-range representation is a real strength; the detail is all there in 3D, whether you want to hear it or not.

The Slatefiber cones and their drivers possess a pro-level balance of tightness and excursion range with no sign of over-ringing or smearing. This performance pays dividends in the stereo imaging, which remains stable over a wide horizontal axis, making mix placement, width control and source identification easy and accurate.

On either side of the mid range, the Alpha Twin Evos shine in different ways. The low frequencies reach down to a respectable 38Hz without a wrinkle and the response is fast, keeping the input free from any unnecessary resonant interference. The Twins are reliable without a subwoofer, though as will become clear, a good one will do no harm.

At the top end of the frequency spectrum, there is an equally transient-friendly behavior coupled with an even frequency response. The crossover between the mid driver and tweeter is audibly invisible, and any harshness reaching the listener is merely a reflection of the nature of the source. 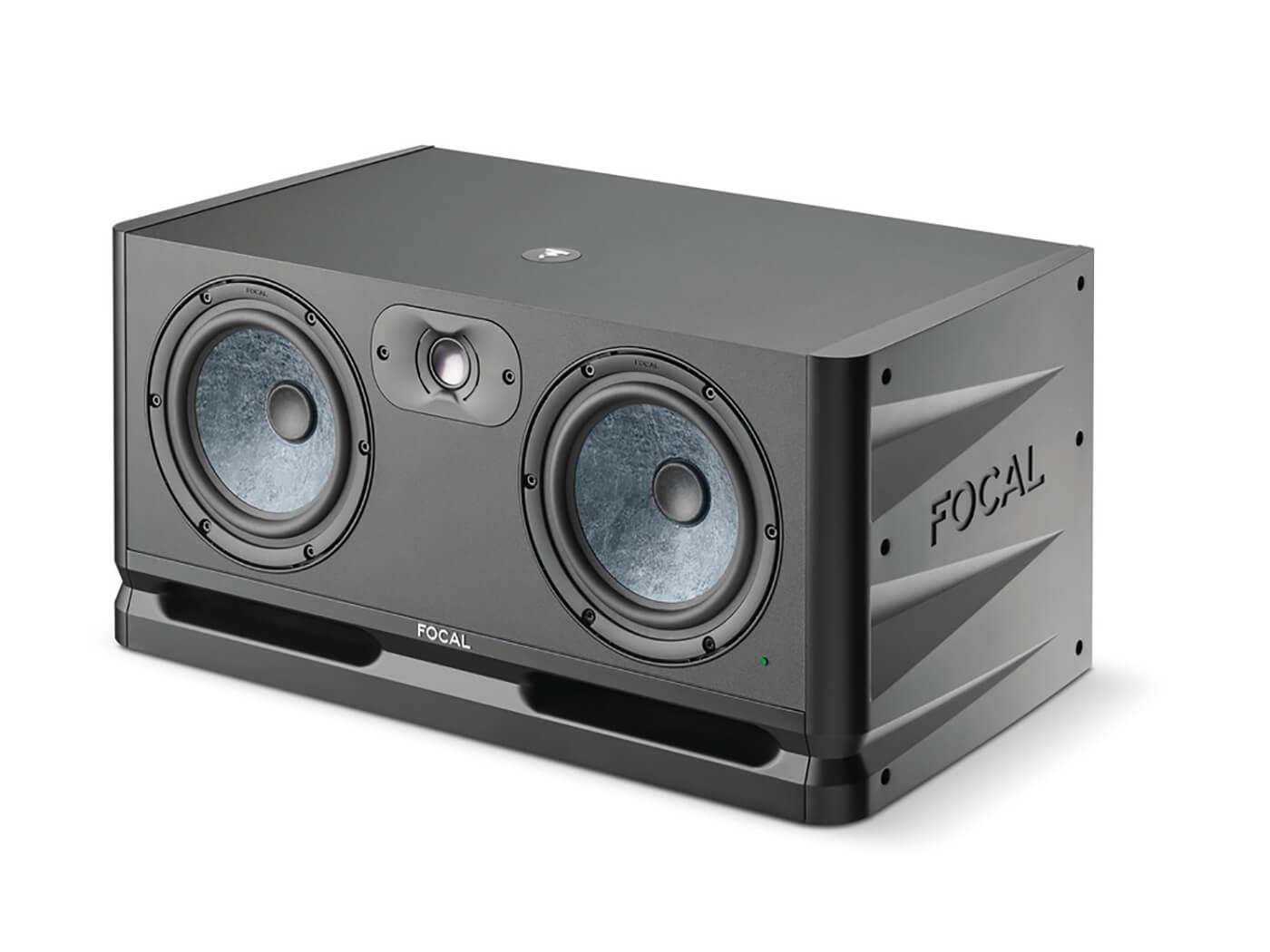 The high-end hype that afflicts some cheaper monitors is not evident here, but there is also a slight lack of airiness right at the top of the range. The high shelf lifts a little too much of the rest of the range to compensate, but in practice it is not worth trying to compensate as it’s only a slight roll-off. Even at the higher end of safe listening levels, the Twins do not fatigue the ear and are a pleasure to work with.

It is apparent that the Class-D amplification, while not as well regarded as Class-A or some Class-AB, has been skilfully in the Alpha Twin E. The benefits are not only felt in the retail price – using this topology is more electrically efficient, produces less heat, weighs less and eats less enclosure space.

Though the Twins are effectively two-way monitors with dual woofers, they behave like three-ways with their frequency and transient response. They sound and work like more expensive monitors, which is an unsurprising testament to the quality of Focal’s designs. If your studio space can accommodate their real estate, then their combination of price and performance make them worth every penny. 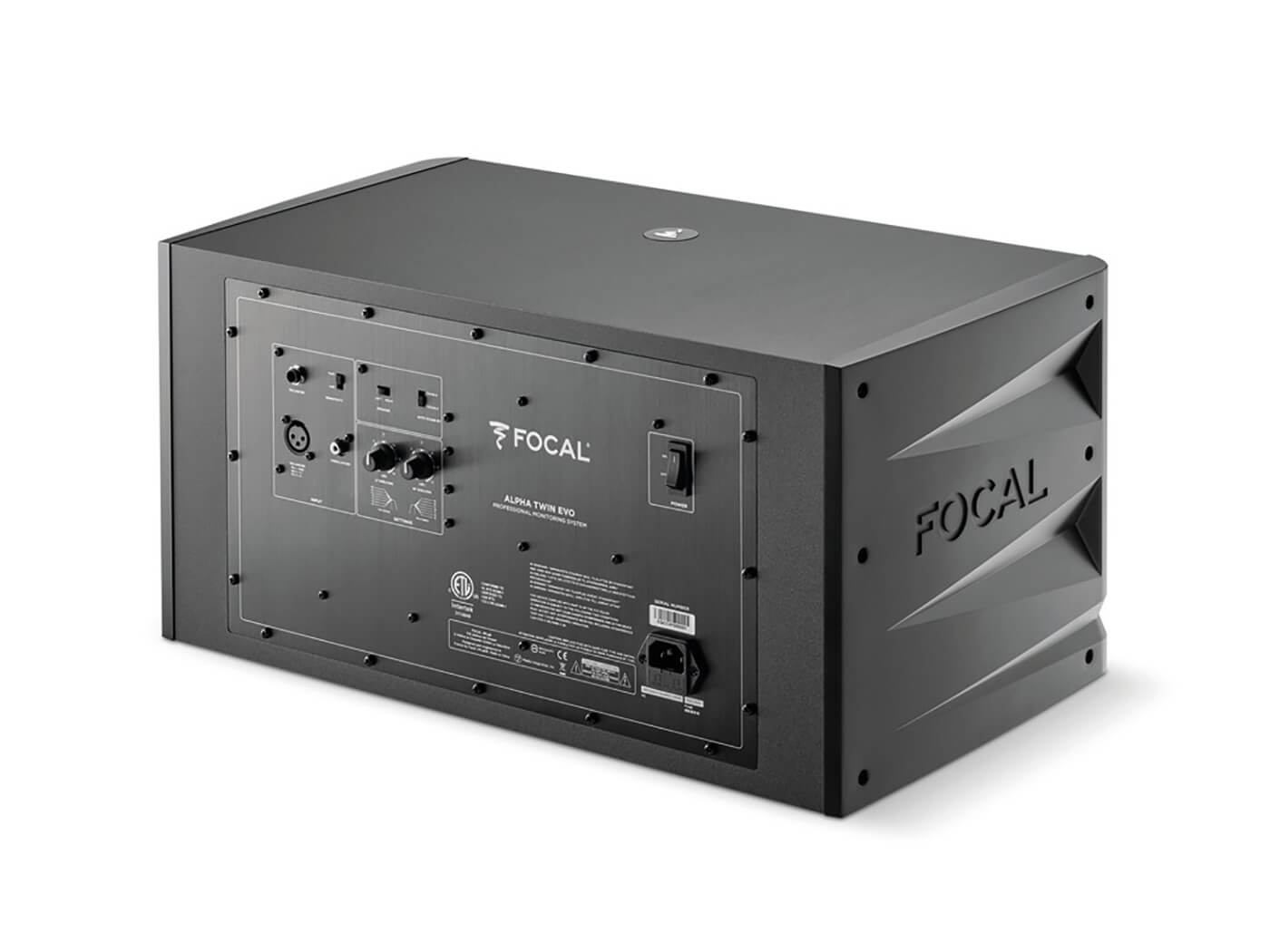 Though the Sub One is not part of the Alpha Evo range, it shares some aesthetic similarities, and of course the Slatefiber speaker cones which are featured in the subwoofer’s pair of 8-inch large-excursion drivers. Instead of a traditional front-firing single large diameter driver, as in the more expensive Focal Sub6, the Sub One uses a pair of speakers in a side-firing design with bass reflex porting at the front of the unit. This makes the unit a slim affair that may suit smaller studio rooms lacking depth ahead of the listening position.

In a standard stereo monitoring setup, Sub One is the first port of call for the stereo signal, after which a pair of parallel XLR outputs passes the feed on to the satellite monitors. This makes the Sub One’s high-pass filter capable of trimming below either 60Hz of 90Hz from the satellites to slot the subwoofer in. 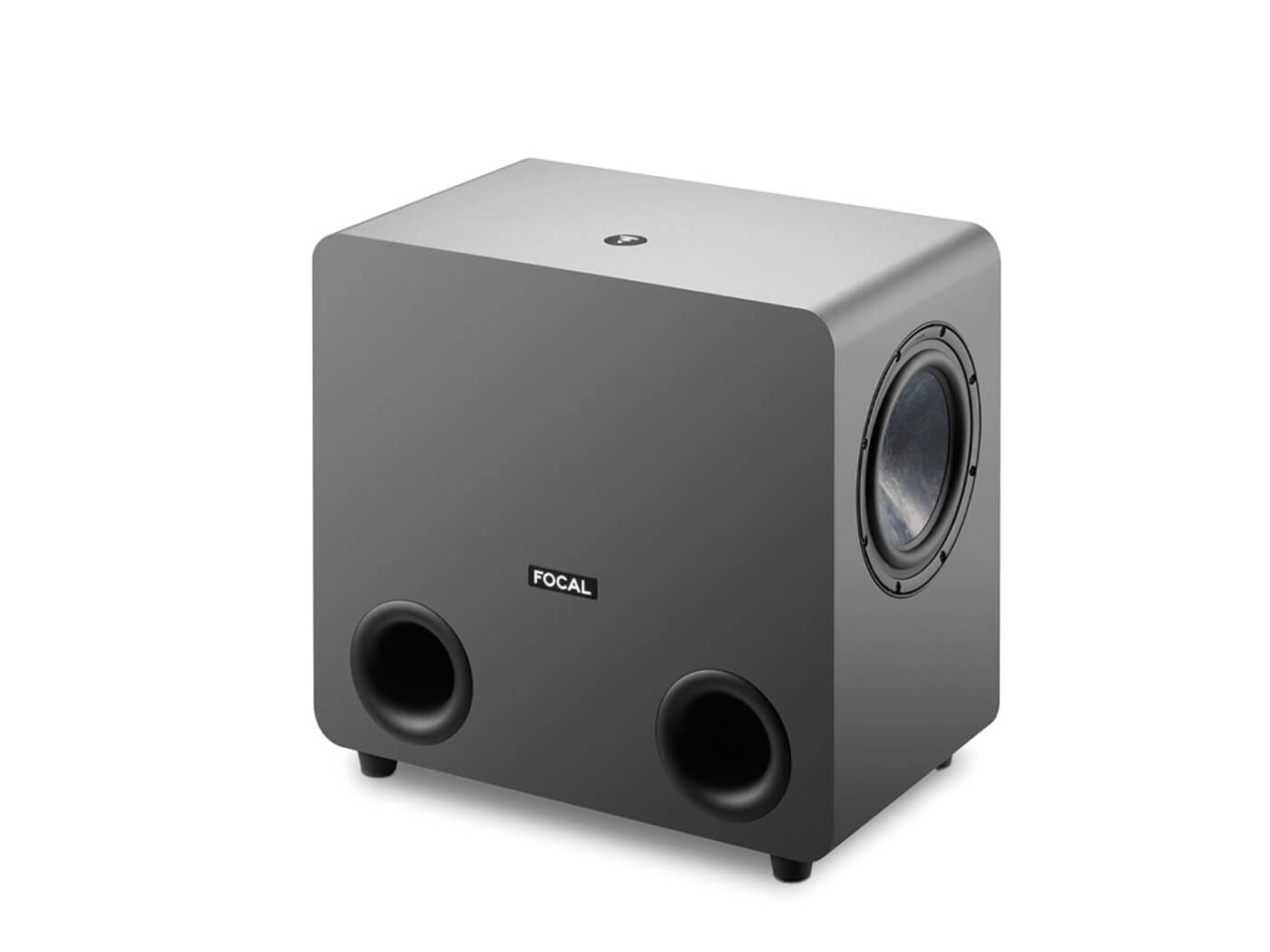 The filter can be disengaged so Sub One can fill in up to where the stereo monitors drop off via the lowpass filter knob. A footswitch can be used to bypass the Sub One and the highpass filter if engaged, which is useful for both setting and day-to-day use. For surround situations, there is a separate LFE XLR input and parallel output that bypasses the low pass filter.

Settling this 200W bass box into a system can take time, as well as regular adjustments of the level and phase controls. It may well be part of a longer learning experience as new situations cast light on the murky waters of the low end. When first wired up with the Alpha Twin Evos, a simple tweak of the level and low-pass filter controls brought the system up to match readiness almost immediately, though with time subtle alterations ironed out a few creases in the response.

The rated frequency range end stop is 40Hz but there is plenty of life in the 10Hz below for identifying bad bass gremlins and getting a handle on the consistency of low, Roland TR-808-style tones. 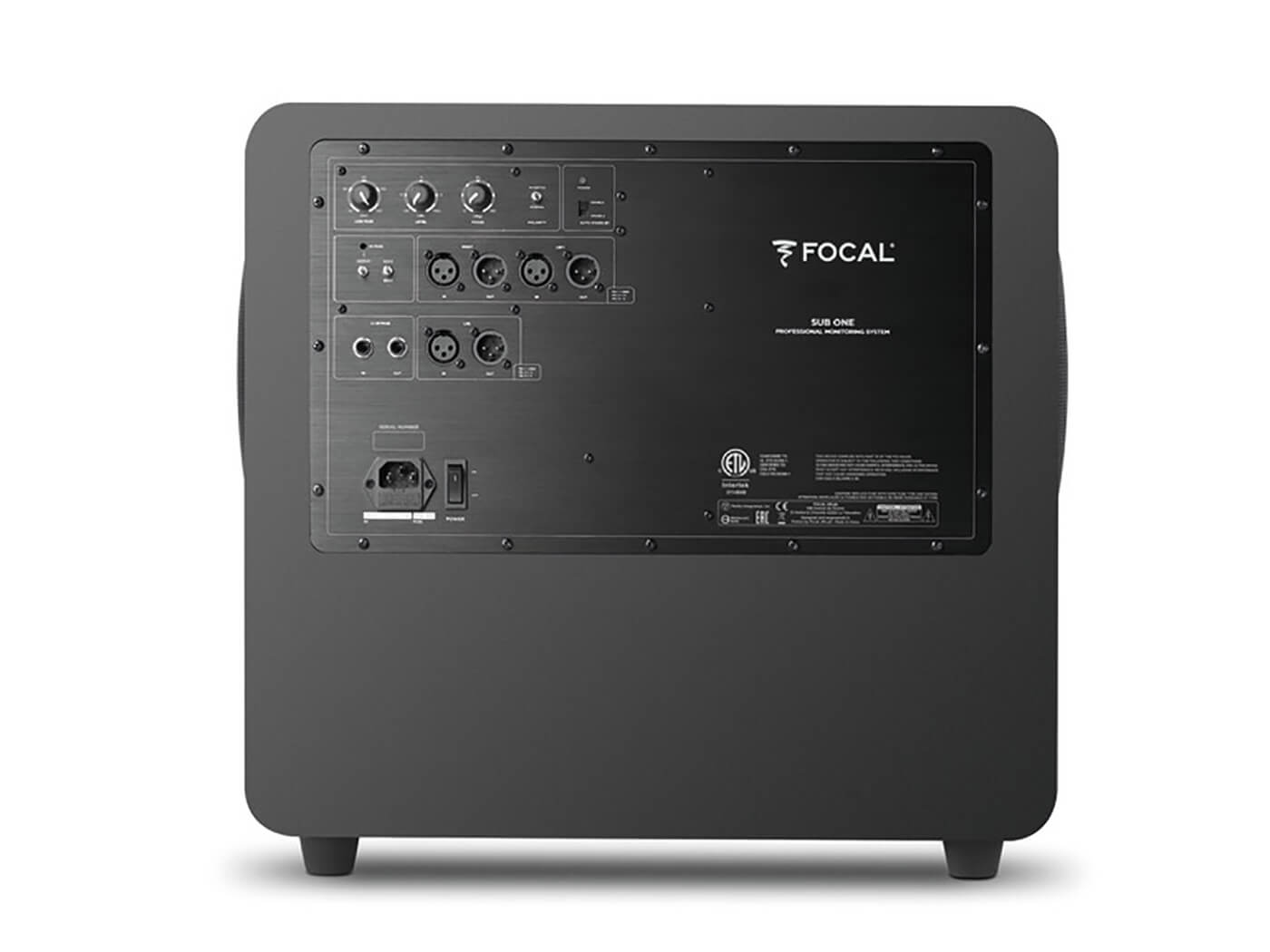 The kick drum bass interplay can sound like flub on lesser monitors, but the Alpha Twin Evos keep it tight without bloat or boom. Adding Sub One does no harm whatsoever. The layers of piano, percussion and BVs that surround the multiple lead vocals can be picked out with ease along with their reverbs, highlighting the well-balanced and detailed mix.

The sumptuous weight of the kick drum is not lost on the Twins, with and without Sub One, and the detail of the beater against the drumhead stays present even as guitars, organ, percussion and vocals crowd around. Everything in the mix, from the hiss and hum of amps to the ridges of the guiro, is laid out sans coloration making the listening experience as pleasurable as it is instructive.

A dense and contrasted mix of a desert dry vocal, bass and drums, and huge reverbed strings, plus heaps of percussion. The chewy heft of the low mids doesn’t get muddled or eat the bass end, which it has the potential to do, whilst the strings, at their soaring height, remain detailed without affecting the drum and percussion transients. Nothing is masked or lost, even the amp noise, tape hiss and drum rim catches mid roll. It’s a rich and dynamic mix which loses nothing through the Twins and Sub One. 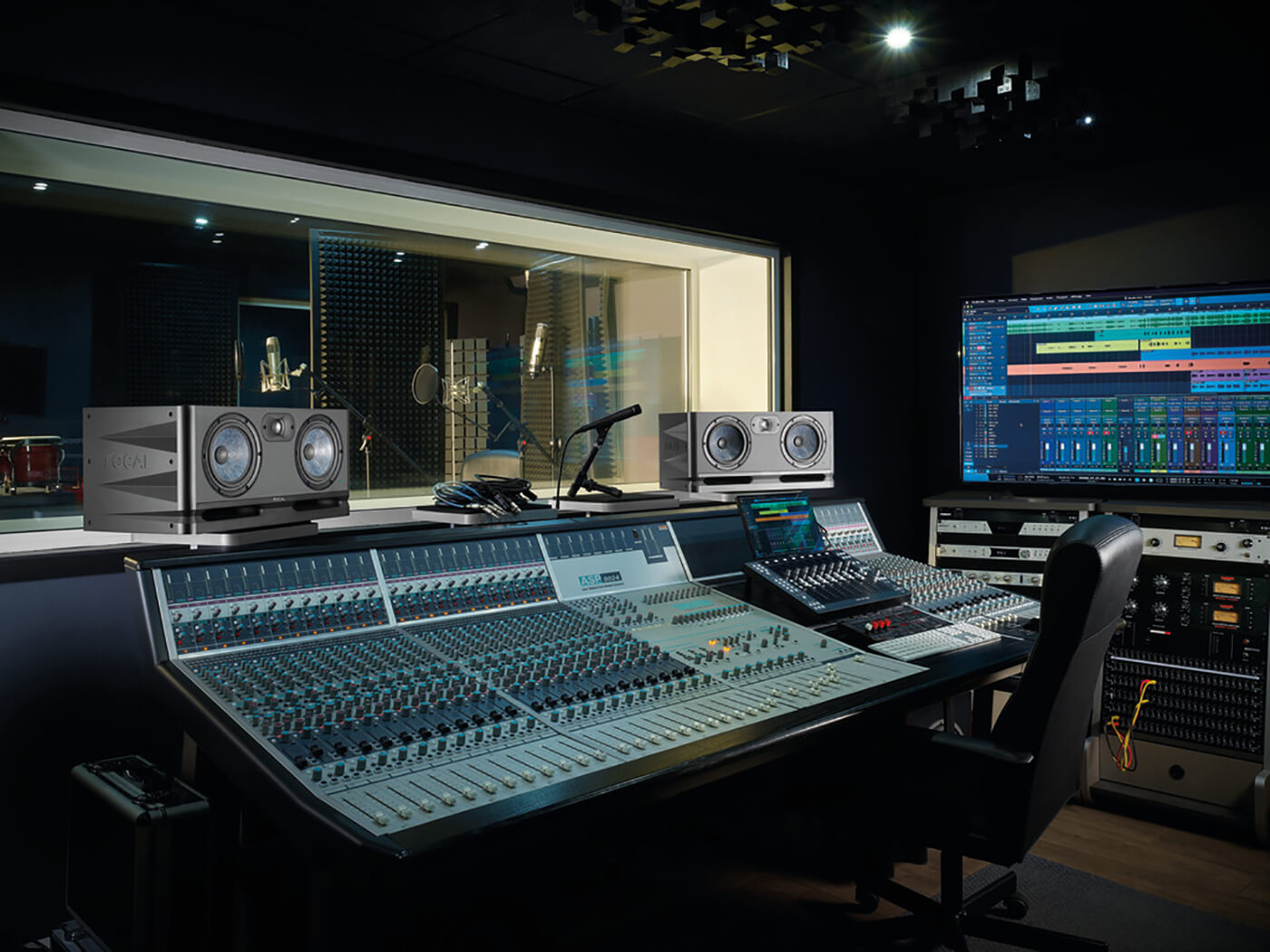 Sub One delivers a powerful, controlled low end free from unpleasant resonances, though it may well show up those caused by room acoustics. It can be easy to overcook the level and bask in the bass, but with careful adjustment this beefy box can become an invisible part of a monitoring system that not only fills in where the stereo tops cut off, but can also take a load off their power amps so they can concentrate on range above.

Compared to the Alpha Evo range, Sub One is an expensive item, but it is cheaper than many of its quality competitors and for the bass conscious it is an assured choice for the price.