“Maybe we need to make music that isn’t reflective of our times, but has something more in it to hope for. At the moment, we seem on the road to total ruin,” says Elizabeth Bernholz, AKA artist and producer Gazelle Twin.

The grim wreckage of our world in 2022 could be a dystopia eerily preempted by the work of author JG Ballard, a writer with a defining influence on Elizabeth’s music. Over a decade of innovation, her sound has evolved, reflecting the turbulence of our times through electronic experiments, choral drones and clever composition.

Gazelle Twin’s records including debut, The Entire City in 2011, 2014’s Unflesh and 2018’s Pastoral, have responded to Elizabeth’s life changes with family additions and moves from the city to the countryside. These events and experiences are there to be heard, poking through the surface of her music.

“Where I now live has traditionally been a Conservative-leaning area so some members of my community have certain views that either baffle or shock me,” she explains. When I wrote pastoral, I was processing this and the craziness of Brexit alongside the madness and relative trauma of having a child. As an artist, you don’t know, until you’ve made something, how what you’ve been going through could impact your music.”

When I was otherwise

Elizabeth’s initial forays into electronica were as a curious kid using a Casio synth to record demos and initial ideas. From sketching the outlines of backing tracks to sing to and record with, she was drawn deeper into a world of sound effects and electronic bleeps.

“I went to university to study music and spent plenty of time in the studio,” she remembers. “Some of my friends at the time had this wonderful vintage analogue equipment, one of them had a Juno which was really fun, another brought in a tape machine. It was great connecting them with my voice and flute.”

“As an artist, you just don’t know until you’ve made something how what you’ve been going through could impact your music.”

As Elizabeth’s experiments continued, her confidence increased, calling on an wider palette of instrumentation and vocals, then marrying this with software.

“Everything I write is on my computer via Ableton,” she says. “So a lot of the process is digital, but my aim is to use less pre-made sounds. Instead I want to recreate them myself, then layer with voice, instruments and samples.”

Elizabeth’s debut album, The Entire City, was originally released more than 10 years ago, with a special anniversary edition due to emerge in April. The beginning of her musical journey, which arrived with a confrontational live show complete with masked costumes, was sparked by a diverse array of influences ranging from classical sounds to Gary Numan and Prince.

“Many of my initial inspirations came from choral music and contemporary classical,” she states. “Then, a lot of eighties, synth-based sounds, particularly Prince and his production on Under the Cherry Moon, Parade and Purple Rain, all those reversed vocals and really beautiful, glistening synths. It was so much fun to play in that space.” 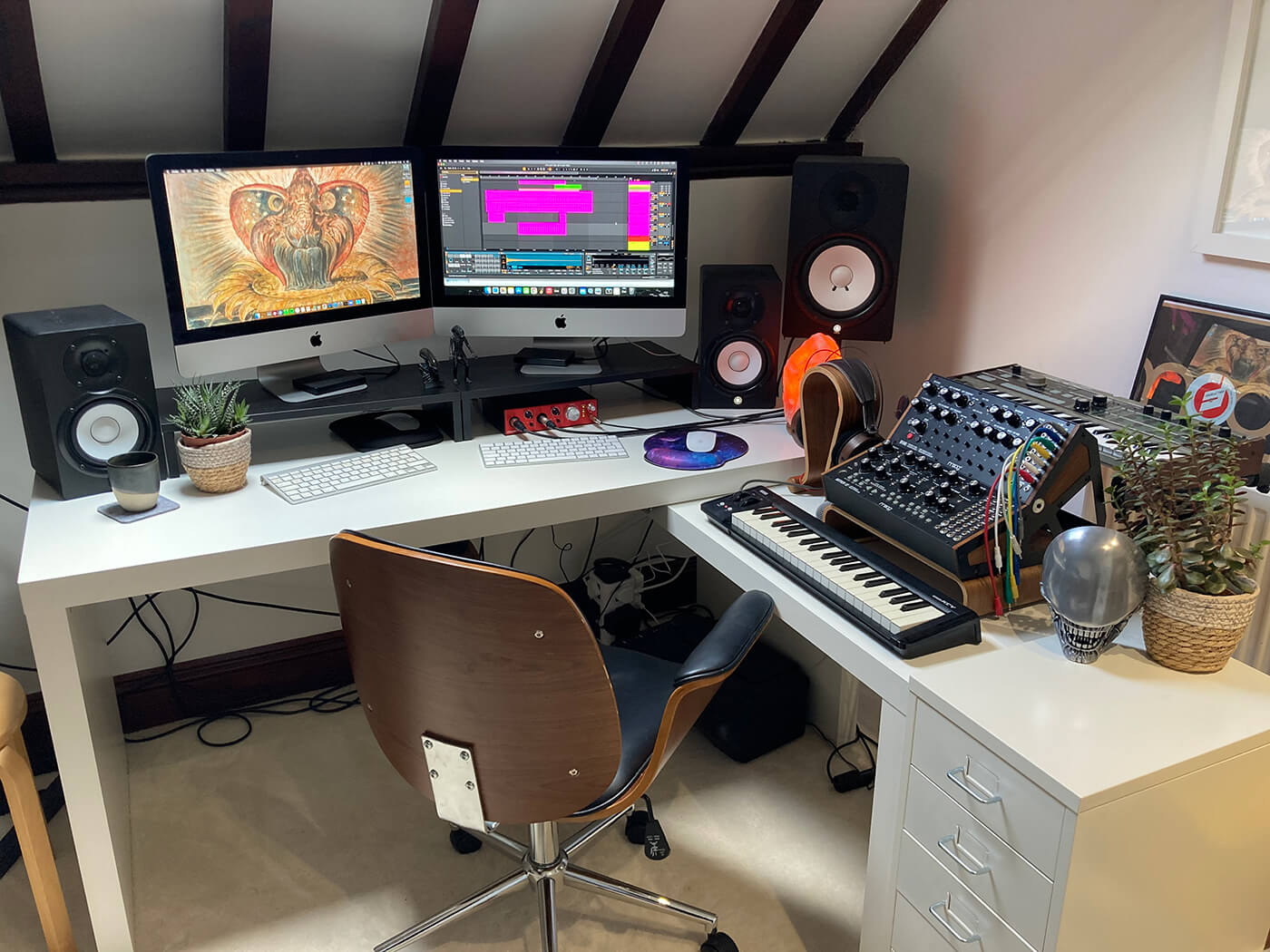 Elizabeth made her debut album using a relatively simple home-studio. A combination of sound card, Ableton, free software and a Beta 58 microphone were part of the domestic set-up she had in Brighton at the time.

“I made the most of what I had to hand, including my voice,” she states. “But I like doing things simply, limiting my instrumentation so I can push myself creatively. I adopted this approach for the album’s visuals too, making videos which now seem quite lo-fi. But I enjoyed being creative in this way and avoided the pressures you might experience in a real recording studio.”

With the follow up album, Unflesh, Elizabeth had the faith in her own creativity to expand her process. This included collaborating with producer Benge [Ben Edwards] for additional studio touches and drawing on his collection of vintage analogue gear.

“I created this record on Ableton, produced it to the point where I was happy with it, then took it to Ben’s studio in London to mix,” she states. “His gear collection is museum standard and I had so much fun in his studio. I spent these amazing few months playing with awesome equipment and getting sucked into this tactile world.” 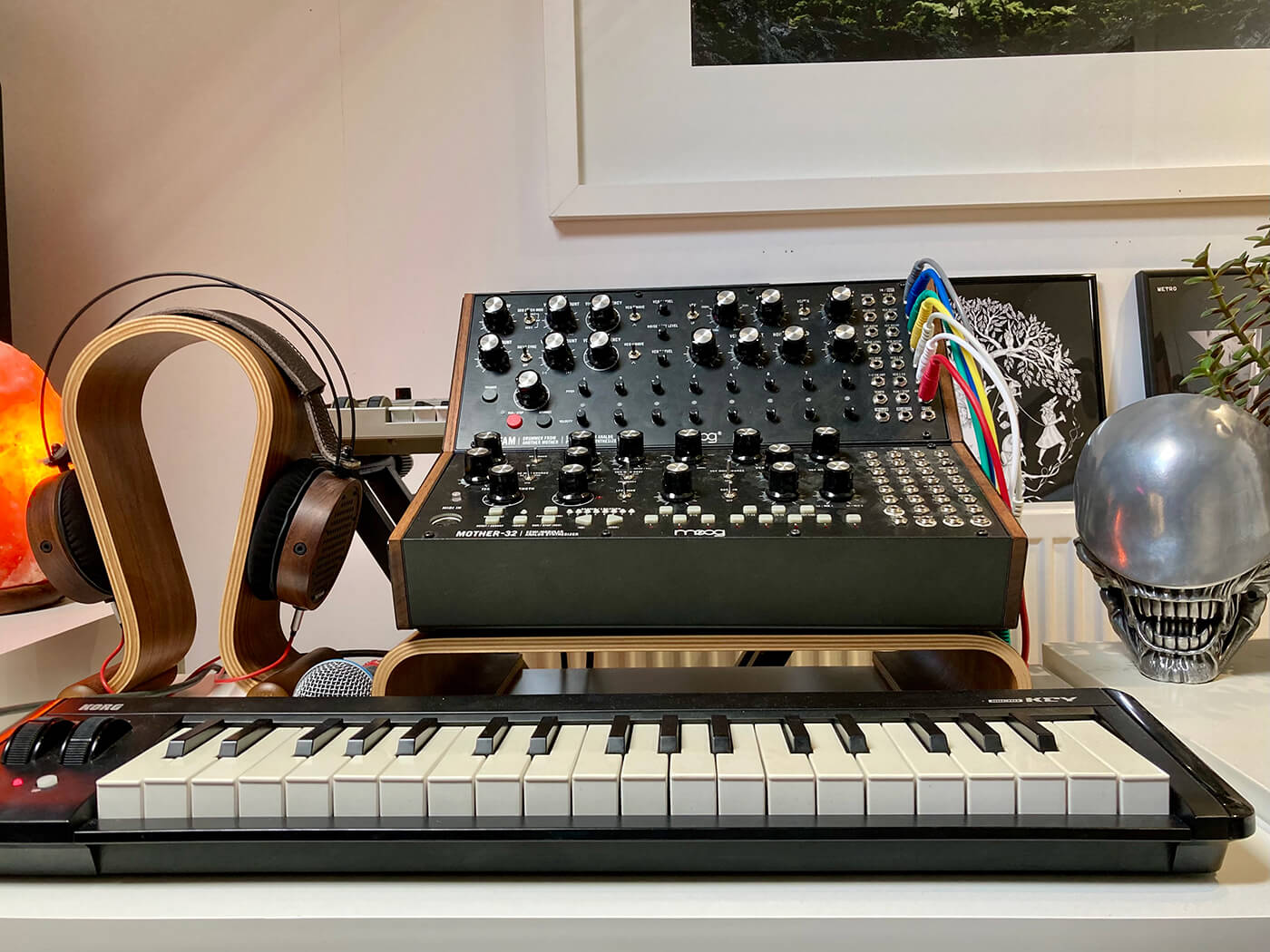 ‘Pastoral’, a record responding to the concept of British identity in the wake of Brexit, involved flipping the switch again, with Elizabeth reverting to a home studio and looking after every element of the creative approach. She carried the self-belief she’d learned through past collaborations into this album.

“My own music often features very intense themes so I enjoy having a brief and working with someone else’s vision rather than my own. I like stepping into another world and attempting to articulate it and work out what I can bring to the music.”

“I made it in my current home in the East Midlands using Ableton, samples of recorder and percussion, bells and field recordings,” she says. “I felt more confident, and finished and mixed it myself.”

With the re-release of The Entire CityElizabeth can now view each album as a different chapter of her creative life, capturing a certain period, attitude and frame of mind.

“I quickly moved on from the sound of my debut,” she explains. “Looking back now and listening to the recordings, I thought the masters were great – which was surprising as when I made it, I didn’t know much about mixing at all. Ultimately, it’s the beginning and it’s fascinating to see your own trajectory.”

Vocals and lyrics often form the foundation of Elizabeth’s musical creations. Working her to dig into the guts of an album with these tools, to delve into alone the accompanying themes and mindset.

“When I make records, I’m trying to make a statement and really get into a certain world,” she says. “It takes a lot of improvising to let these come out.”

Elizabeth’s voice takes on different modes for each project. As part of her own artist material, there will be lyrics to write but when it comes to composition, she uses it as just another texture.

“It might be that I use a sample of my own vocal that is really pitched down, stretched out and shaped through different reverbs and delays,” she says. “This creates a drone or atmosphere. You wouldn’t know this is a voice, but it has a grainy texture to it which you wouldn’t get with a synth. I find it really exciting to mix the digital and organic.”

Different themes have emerged from Elizabeth’s records but these aren’t etched in stone from the start of the writing process. Instead, she opts to make as much music as possible, then carve out musical structures from the results.

“I let everything out to make music, then at the end I gather it all together and the theme emerges,” she says. “That’s how lyrics form too. I usually start out with total nonsense, then go back and find words within the various sounds. This somehow makes sense.”

“I like doing things simply, limiting my instrumentation so I can push myself creatively.”

Author Ballard is an ongoing source of inspiration with the Gazelle Twin Kingdom Come release directly named after one of his novels.

“I was and am still drawn to how he understands human nature, even though he only lived in one specific area [the village of Shepperton in Surrey] for a great period of his life,” she says. “Although he didn’t travel, his observation of shifting culture from this point of stasis is so accurate.” 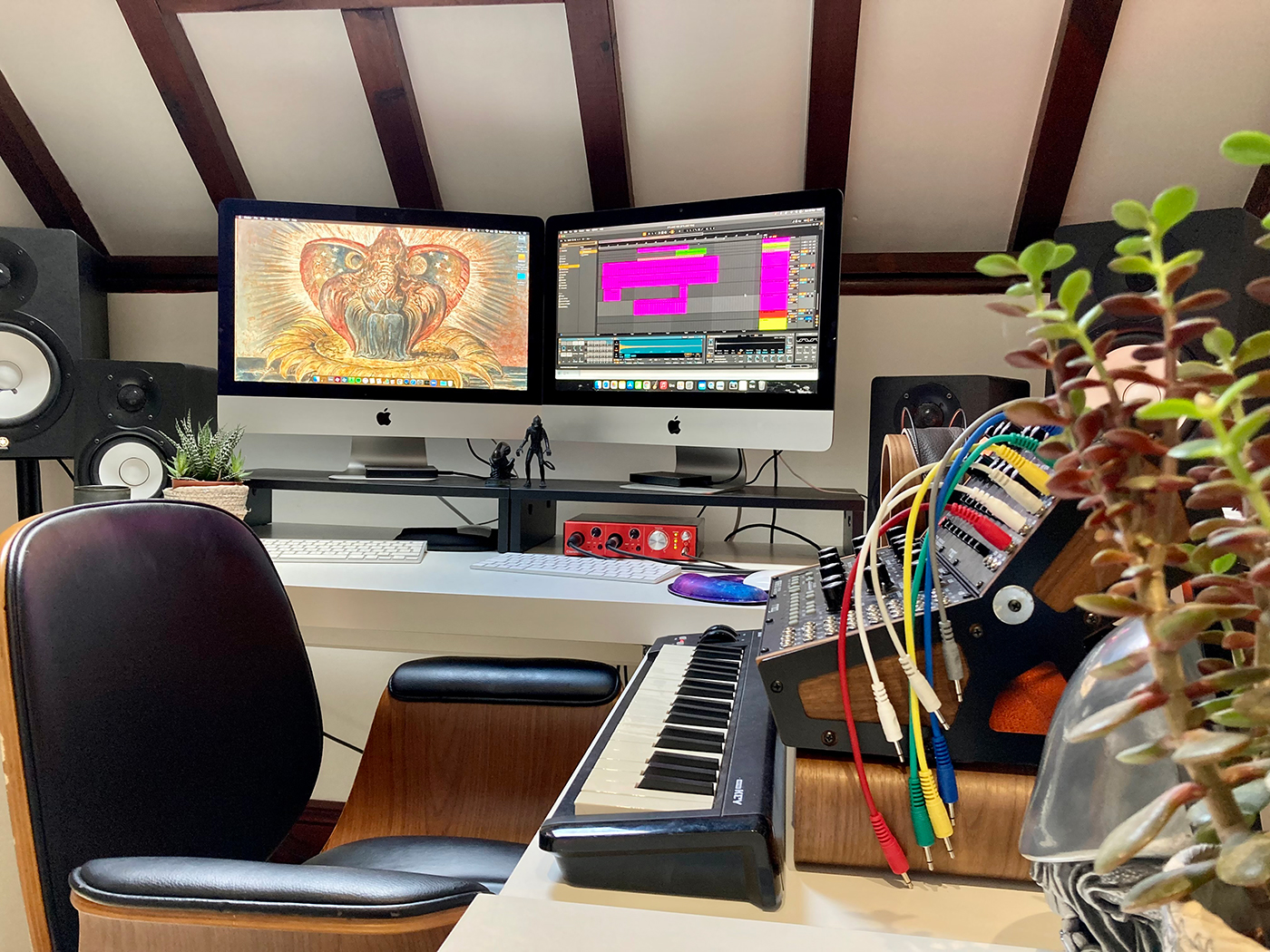 Elizabeth’s openness to experiment and working quickly are two techniques she feels emerging music-makers can deploy to help them find their creative feet. Doing so can potentially expose you to experiences that ensure you think again about what you’re trying to realise with your sound.

“You need to leave yourself open to learning and making mistakes,” she advises. “Don’t feel pressured into getting everything sounding really clean and slick. Some of the best music hasn’t been brilliantly produced or recorded. It’s lovely to have amazing gear but you don’t need it to make music.”

“When I make records, I’m trying to make a statement and really get into a certain world. It takes a lot of improvising to let these come out.”

Rather than laboring over a track, Elizabeth likes to work quickly. If it’s not taking shape, then she’ll give an idea some space to breathe before returning to it to see if she can revive it.

“I get really bored and don’t like recording over and over again,” she states. “I always feel your best take is in the first five. These have the energy – the more you do, the less their power.” 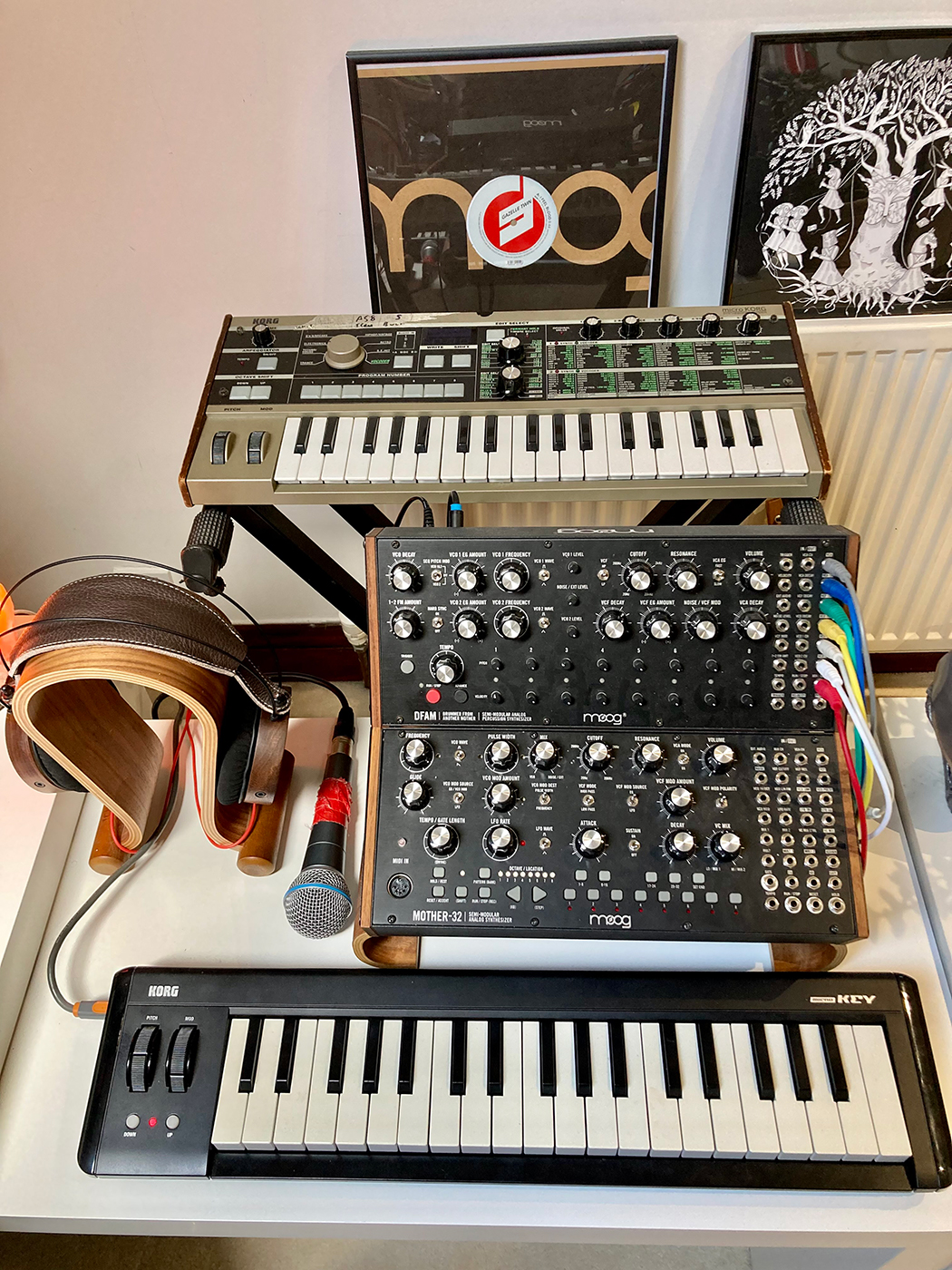 Aside from artist material, another creative avenue has been the world of soundtracks with scores to The Powerwritten with Max de Wardener, and Nocturne. It’s a musical galaxy she’s been drawn towards since her initial dalliances with music making.

“My own music often features very intense themes so I enjoy having a brief and working with someone else’s vision rather than my own,” she says. “I like stepping into another world and attempting to articulate it with what I can bring to the music.”

The Power is a 2021 psychological thriller set in a hospital during power outages caused by a miners’ strike and saw Elizabeth and Max recording sounds on the sets where the film was shot.

“The starting point for the score was this sense of loneliness, blackness and space – this kind of fizzling out of electricity,” she says. “That was at the core and threaded throughout. We ended up having the acoustic world taken directly from there and weaved that into the score. It’s someway from the ‘dots on a piece of paper’ style of composition I studied.”

But it just goes to show how far Elizabeth has traveled as Gazelle Twin. With more soundtrack work incoming, she’s also releasing The Wastelands, an accompanying piece to her debut record, originally let out into the wild as library music. These myriad paths leading off her creative core demonstrate how she’s willing to embrace as many opportunities as she can with her artistry. A case in point is with ‘The Power’ where the sounds of the wheels of a hospital trolley being pushed down a corridor proved to be an integral part of the score.

“When we listened back, we discovered this incredible melody in there and the bulk of the score was taken from this little squeak. It’s all composition and totally valid. But it’s really simple as well.”

The Entire City will be re-released on 8th April, visit gazelletwin.com for more information. Watch the video to Hole in My Heart from The Wastelands.