Slippedisc.com has the first review, by Larry L. Lash, of Britten’s luxury-cast opera in Vienna, with Kaufmann in a role he has long coveted.

A BOLT OF LIGHTNING IN THE STAATSOPER’S VOID

VIENNA — As I approached Wiener Staatsoper last night, the relatively new neon bars set into the vast windows overlooking the Ringstraße were flashing in blue:

Kaufmann started out strong in the opening trial scene with surprisingly terrific English. Why was I surprised? What can this man not do? (I once saw this opera in Graz with a superb English-singing ensemble save for its Grimes, heldentenor Reiner Goldberg, who sang not one intelligible word). Kaufmann’s English actually improved over the course of the evening. He never over-enunciated, nor made any noticeable mistakes; every word was clearly pronounced and understood. He sounded quite at home with it all.

I was ready to put this down as a first performance that will grow in time (and it still can; now that he knows the words, he can color them with greater depth), but the production, created by Christine Mielitz in 1996 for Neil Shicoff, really prevents him from developing any kind of relationship with other characters. That applies to the entire cast: they are all cartoons except for Grimes and Ellen (Lise Davidsen); even Balstrode (Bryn Terfel) is painted as a one-dimensional personification of gruffness.

Vocally, Kaufmann began to establish firm footing and exquisite breath control with “Now the great Bear and Pleiades”, opening with his unique baritonal pianissimo (enough to cause tingles down my spine). An introspective and socially-inept character began to emerge with this aria in Act I scene ii, consisting mainly of two perfectly-calibrated, slowly-descending scales.

His first truly jolting, clarion moment was the monologue in Act II scene ii, as Grimes prepares to go to sea with his new apprentice. Deprived of human contact, this man is nuts and lives in his head (especially since there is literally no production – bare stage, no sets, no props except for a rowboat, only idiotic highway lane reflective light strips).

But nothing could have prepared me for the a cappella Act III scene ii “mad scene”.

Kaufmann began quietly sobbing as he hauntingly recalled the deaths of his apprentices (“The first one died, just died…”). My eyes were so clouded by tears I could barely see the stage. This was also the really only chance Kaufmann had to display his physical connection with his scruffy, hunched-over, sometimes hyperactive character, singing and whispering directly to the body, even when Ellen and Baslstrode attempt to communicate with him. Grimes has totally disappeared into his own reality.

A Grimes of this magnitude has the potential to become a perfection, raising memories of Vickers and dear Philip Langridge. Absolute perfection is attained by condutor Simone Young, who received the loudest ovations of the night from a near-capacity house. This score is under her skin and never sounded more thrilling and alive. The Staatsopernorchester was its best – well, the best it can be with a complex score which it rarely performs (is there anything like it outside of other Britten operas?). Excelling in the tiniest details, the entire score was as thoroughly compelling as the famous “Sea Interludes”.

The excellent chorus was relegated mostly to raised platforms – or a sunken pit – far upstage, so it had no chance of interacting with the townsfolk. The only negative aspects were some blurry diction and one big goof when falling afoul of Young’s beat (which, from where they were standing, they probably couldn’t see).

Lise Davidsen was a strong-willed Ellen, too often played as a mousey schoolmarm. The size and metallic sound of her voice are damned impressive (think of prime Astrid Varnay). But the size … yeah, about that. I wanted to shake her and tell her that even Elektra has some soft passages. Not to be heard here. 97% of her singing was almost a match for the LOUDEST thing I have ever heard: a Dame Gwyneth Jones Turandot about 30 years ago which may have caused permanent ear damage.

When Davidsen attempted to sing piano, the voice clouded over and got a bit raspy. Is she “singing over a cold” or is it always this way? She gave a sufficiently decent character – if rather bland – but was another victim of the production.

Terfel sounded a ghost of his former self. Best in passages of one-syllable words all sung on the same note, a nasty wobble overmatched any effort to sing more-complex vocal lines. The sound – more shouting than singing – was hollow. His English screamed, “Hey, all you blokes: I’m BRITISH”! He particularly loved any words which end with the letter T. Not much of a character outside of a portly presence, this Balstrode was certainly no friend of Grimes. 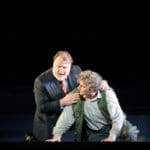 The townspeople had no particular standouts except for the Ned Keene (Martin Häßler), always a good tryout for a young baritone on his way to Billy Budd. Auntie (Noa Beinart) and her two “Nieces” (Ileana Tonca and Aurora Marthens) blended gorgeously with Ellen in their Act II scene i quartet. The Reverend Horace Adams (Carlos Osuna) offered endearing, lyrical support. Happy stereotypes were Swallow (Wolfgang Bankl), Bob Boles (Jörg Schneider), and Hobson (Erik Van Heyningen) who was challenged by his drum-playing which leads the chorus to Grimes’ hut (lots of marching in place as the green highway markings speed by), finding it difficult to delineate clear beats.

Most bizarre was the Mrs Sedley of Stephanie Houtzeel, whose past performances include a superb Octavian, a sultry Jenny in “Mahagonny”, and an overwrought Komponist in “Ariadne auf Naxos”. A question remains as to why she delivered most of her part in Sprechstimme. Houtzeel still has a lovely, warm mezzo. She managed a few lines that sounded fine, but she was a major victim of the production.

Why does this production even exist in 2022? It has now been around for 49 performances over 26 years (in that time-window the Met has given it only 11 times). It would by far be better for the singers, chorus, conductor, and audience to present it in concert form. Earlier this season, Theater an der Wien revived it bare-bones production by Christof Loy – Mr I-can-stage-any-opera-in-a-big-empty-room-with-large-large-doors – which seems a masterwork compared to this insulting drive.

How Christine Mielitz had an international career is beyond me (After this 1996 debut production at Staatsoper she was invited back for Parsifal (stage debut of Thomas Quasthoff) and Der fliegende Holländer in the same season! Both were/are appalling; the Parsifal has been scrapped.) The stage is bare. Literally. Elevators are used to pop-up – or drop-down – certain sections of the stage, which did things like relegate the chorus for the Sunday church scene to far upstage and slightly below stage level. (Why, for Christ’s sake, could they not just sing from offstage, as written?). Suddenly neon lights define the proscenium around the black void. No discernable reason – maybe to add some color to the chorus’ featureless black costumes?

Then strips of light start to appear on the stage floor, suggestive of the yellow lines which divide lanes on a highway. Then they turned green and began moving to a distant point, leaving no doubt that we’re on the road to nowhere. In the middle, far above the stage, hangs a lighted disc. Blue, white, red – the moon, the sun? Then it morphs into a clock-face. As with most of the inventions of this production, it is utterly meaningless and rather distracting. 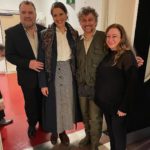 The chorus is kept mostly upstage and given no chance to interact with the townspeople. Even when we first see the townspeople they are sitting in a single row of chairs, facing the back of the next person, heads buried in newspapers. There is zero chance for interaction and character development. They are cartoons. Men are sexually-starved buffoons. Women are tarts. Mrs Sedley may be a lesbian, in monochrome dove-grey pants suit, long scarf, pert bowler, and masculine strut. This is the most vivid costume in the show and it deepens the question: when is this supposedly taking place? My guess would be the late 1920s. Dancing the Twist and the jazzy snapping of fingers to “Old Joe has gone fishing” only confused thing even more. At times I felt embarrassed for the cast.

Perhaps the most disturbing and needless gimmick is the use of prepubescent boys’ bodies. When the opera opens at the inquest for William Spode, Grimes’ late apprentice, his body lies center stage. Grimes takes the body with him at the end of the scene. When John-with-no-surname, Spode’s successor, is delivered, Grimes grabs him, takes him to his hut and beats him. Grimes is oddly not even in the room when John falls to his death (a stuffed body doll is clumsily tossed from the high ladder which the poor kid has to climb wearing a safety harness). Grimes’ “mad scene” is sung mostly to the dead boy, and when Balstrode yells at him to take the ship out to sea and sink her, Grimes has already departed with the corpse over one shoulder.

Grimes, obviously descending from extremely troubled and socially inept to totally insane, doesn’t hear a word sung by Ellen or Balstrode: he just hovers over and hugs John’s body. Is paedophilia and/or necrophilia being suggested? It certainly doesn’t help anyone sympathise with Grimes. Performed entirely in this black void, there is no sympathy to be found anywhere, except perhaps for Britten.