UK-based gritty bass music producer Zero is one of the leading forces in a global movement that cleverly combines drum ‘n’ bass with garage with dubstep with house and techno to merge into one explosive dance sound brandishing an in-your-face, relentless bassline standing front and centre. The result: a winning combination that brings main stages from the UK to the US to a state of frenzy.

We delve into the mind of the producer, who chats to us from his studio, giving an insight into the plug-ins that have helped shape his upcoming mixtape, Feel So Free and his signature Zero bass.

Zero! We’re so excited to hear the first single, Feel So Free, from your upcoming seven-track mixtape. What was the inspiration behind this track?

Thanks! I cannot wait for you and everyone else to finally hear it.

Feel So Free started initially from me watching old grime freestyles on this Instagram page I follow. I found this one clip and I immediately thought ‘that is getting chopped up straight away’. I then thought I’d run further with the grime influence and created this classic detuned grime saw wave synth that you can hear in the breakdown before the drop. It’s basically a Reese bass with a high pass filter on it and a really fast decay on the LFO which creates this lazy yet aggressive stab.

You’re part of the bass music scene that’s been rife in the UK for years and is now dominating the US. How would you describe your sound to a first-time listener?

I always find the best way to describe my sound to someone who hasn’t ever heard of me is by asking: ‘do you know drum ‘n’ bass?’. If they say yeah – which most people usually do – I say ‘well imagine all the heavy sounds in that over a garage/house beat’.

Bass music today can be a mixture of UKG, dubstep and drum ‘n’ bass. Who/what are you influenced by musically?

You might not be able to hear it but I’ve always taken quite a lot of inspiration from techno and old 90s trance. Certain drum grooves in trance are actually very similar to speed garage, and a lot of the darker sounds in some techno are quite dubstep-y. 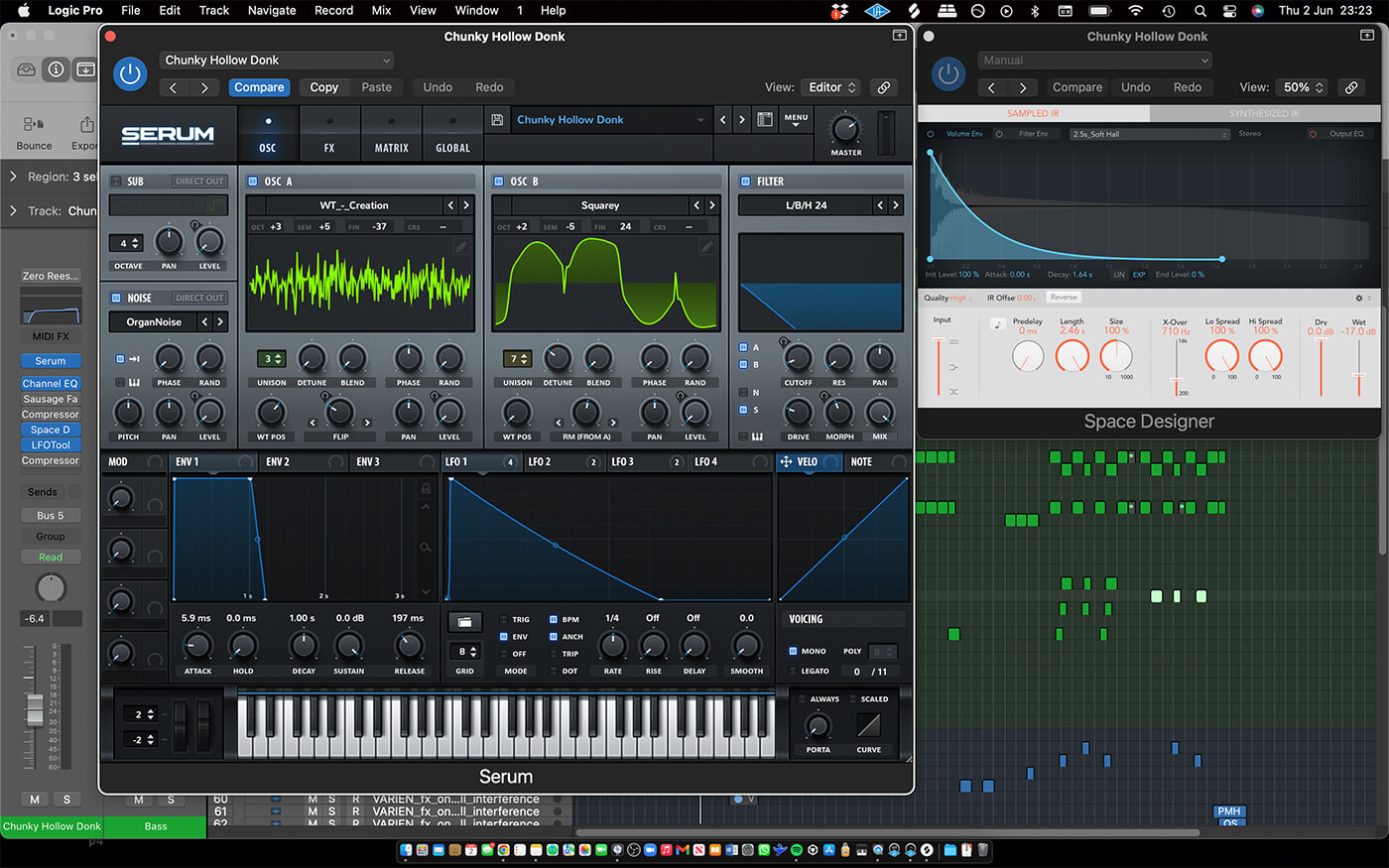 You can certainly hear that in Feel So Free! What’s your latest plug-in purchase?

To be honest, I bought the entire Waves Mercury bundle less than a year ago and I’m still getting through everything they have to offer (which is a crazy amount!).

However, Brauer Motion is so good. Stereo width and overall wideness in electronic music are important to me and this plug-in is basically a cheat code to achieve that. It’s like an automatic multi-panning effect that moves whatever you’ve applied it to all around the stereo field in completely different ways, creating this immersive atmospheric width.

What’s the best free plug-in you own?

It’s a cliche boring response but probably Camel Audio’s Camel Crusher. I have had it for years now and have always whacked it on various different basses to spice things up a bit and get some different distorted tones to break through. 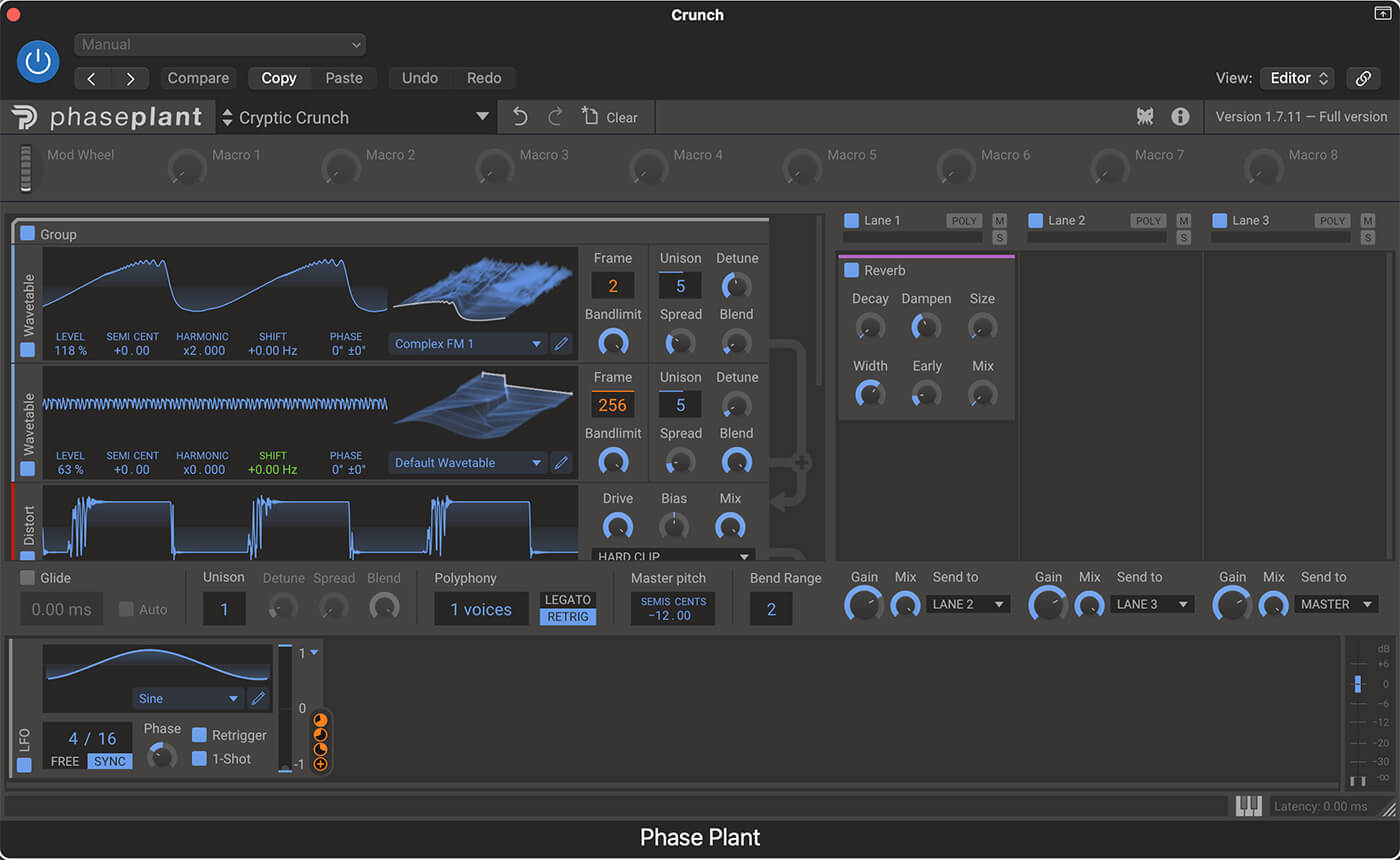 What’s the best value plug-in you own?

Xfer Serum, without a doubt. The best decision I ever made was switching from Massive to Serum back in 2016.

For its price, the possibilities you can get out of it are insane. The fact it’s been my main go-to synth for sound design and basses for the last six years and still to this day. I’m managing to make different sounding mid basses says it all.

Also top tip – you can download the original Massive wavetables and the new Massive X wavetables, and import them into Serum, so you get the best of both worlds if you’re a Massive die-hard fan through and through (which a lot of producers are still). 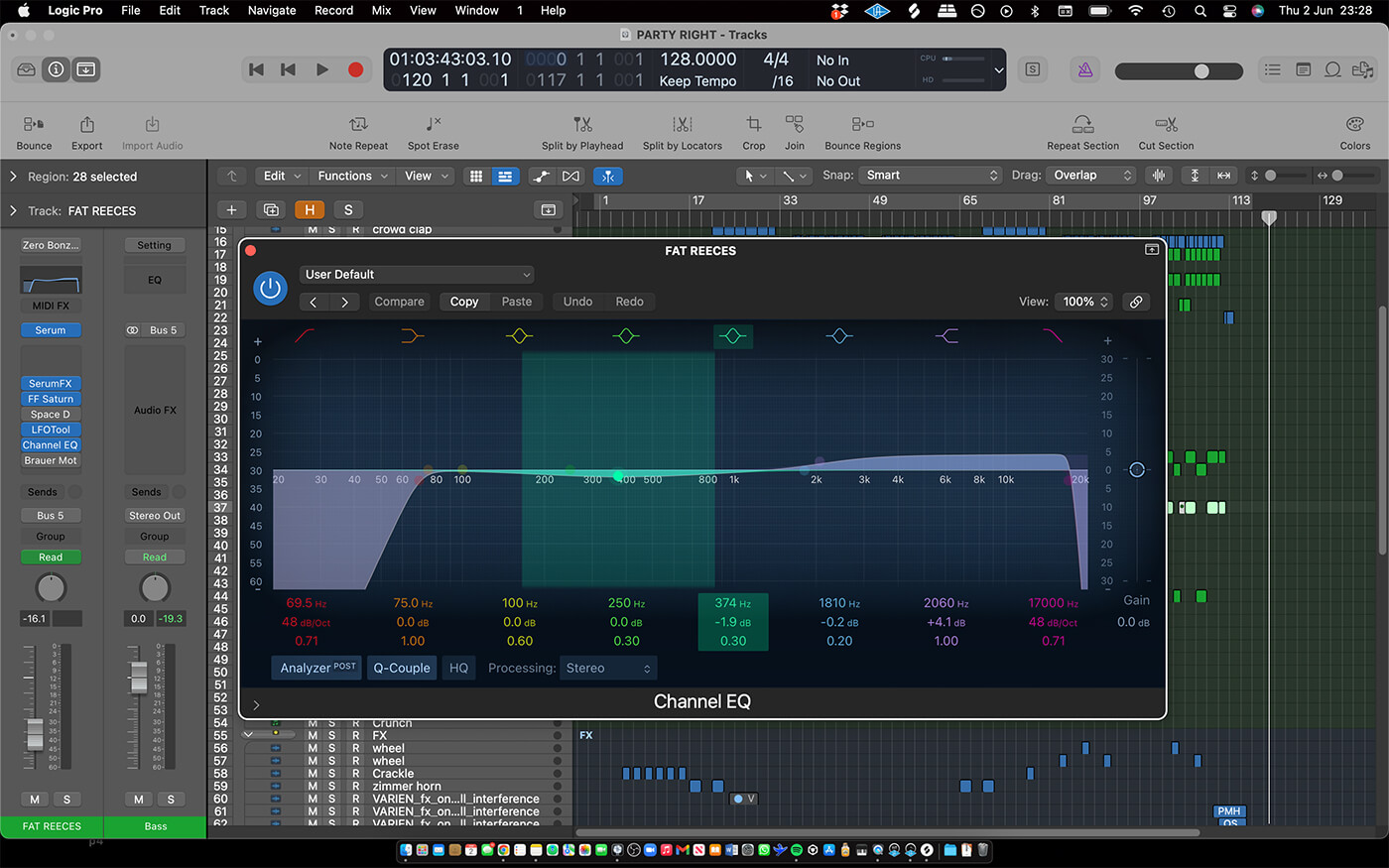 What’s the most expensive plug-in you’ve ever bought?

Probably Kilohearts Phaseplant because I bought the bundle that had, like, every single FX module in it. Currently no, it is not worth it because I’ve been too lazy to learn how to use it properly. BUT, I know that one day when I’m feeling REALLY motivated I’ll sit down and learn it properly. 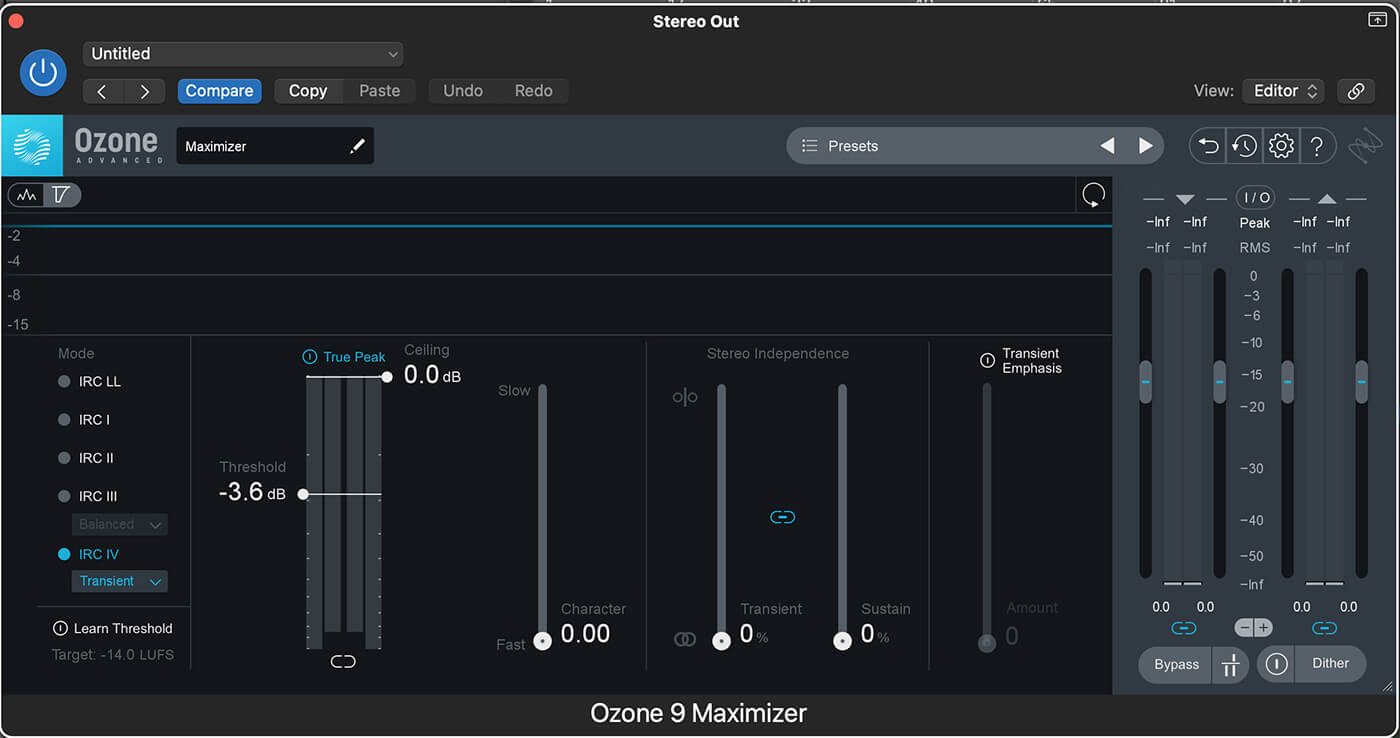 What plug-ins go on your master bus without fail?

I used to really go in when I mastered tunes to start with, like EQ mid and side, Multi-Band Compressor, Exciter, Stereo Imager and then a Limiter (all in iZotope’s Ozone).

But I end up just using the Maximiser in Ozone now and that’s it, because I find adding loads of other stuff actually makes it sound less how I want it to. Sometimes the stereo imager messes up the phasing in certain basses and creates artefacts, for example.

I’ve been guilty of just using a Sausage Fattener on the master before too because it works exactly like a limiter. Sometimes it’s good to weigh up all your options in terms of what can get your track to be as loud as you need it, whilst still sounding clear and not too squished. 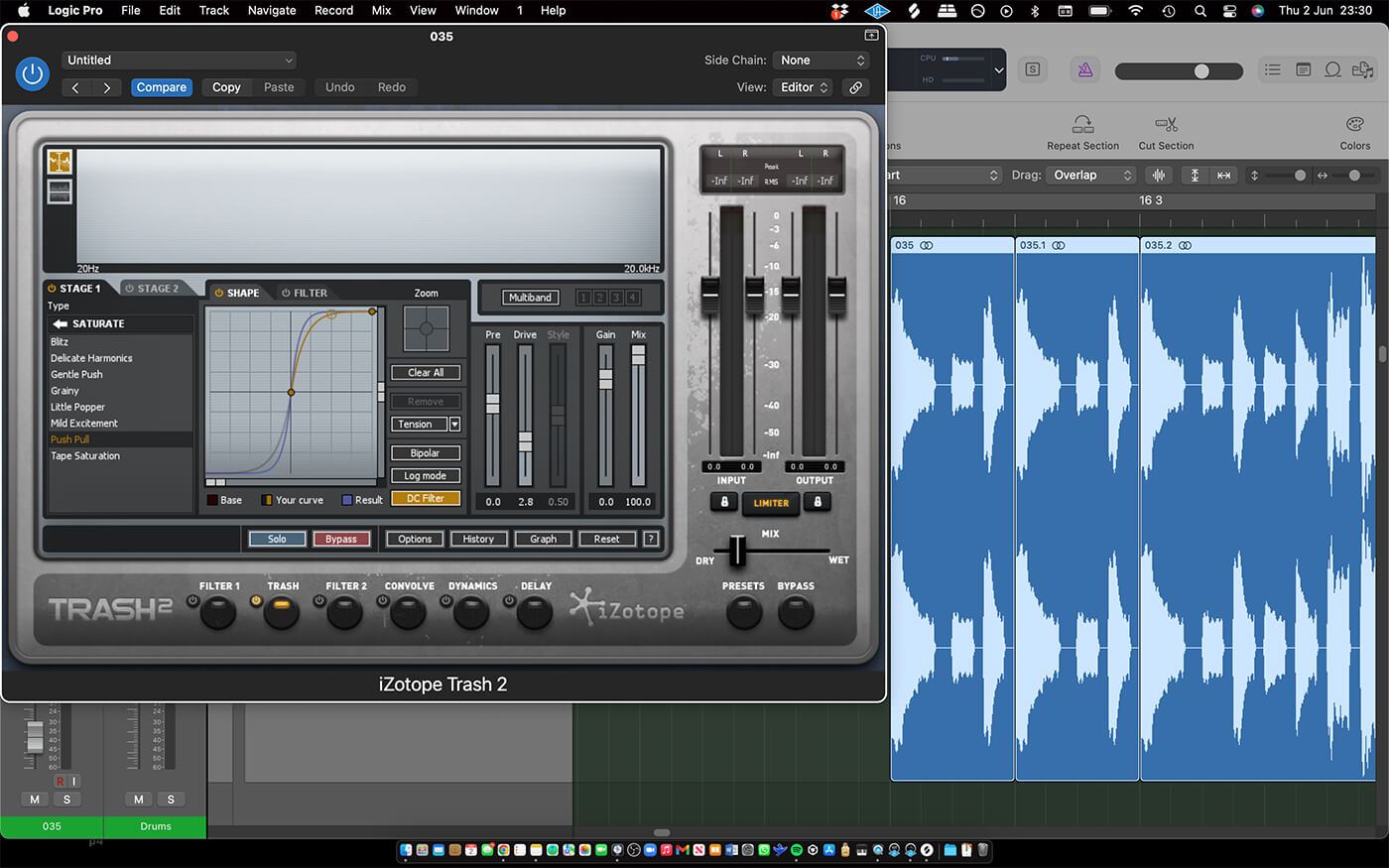 Are there any plug-ins that Feel So Free or the whole EP wouldn’t be complete without?

One plug-in I use on loads of different bits ranging from single drum hits to raucous bass patches is iZotope Trash 2. It’s a really beefy overdrive plug-in that has an insane amount of different settings and types of distortion. I mainly use it on basses when I feel like they’re lacking in overall power and well, beefiness, but also it’s great for drums too.

If I ever find a nice breakbeat sample or something that I feel could do with spicing up, I’ll whack Trash 2 on it. The bass from the kick distorts the whole drum loop as it’s all one file and it suddenly becomes this insanely crunchy industrial techno sounding loop. 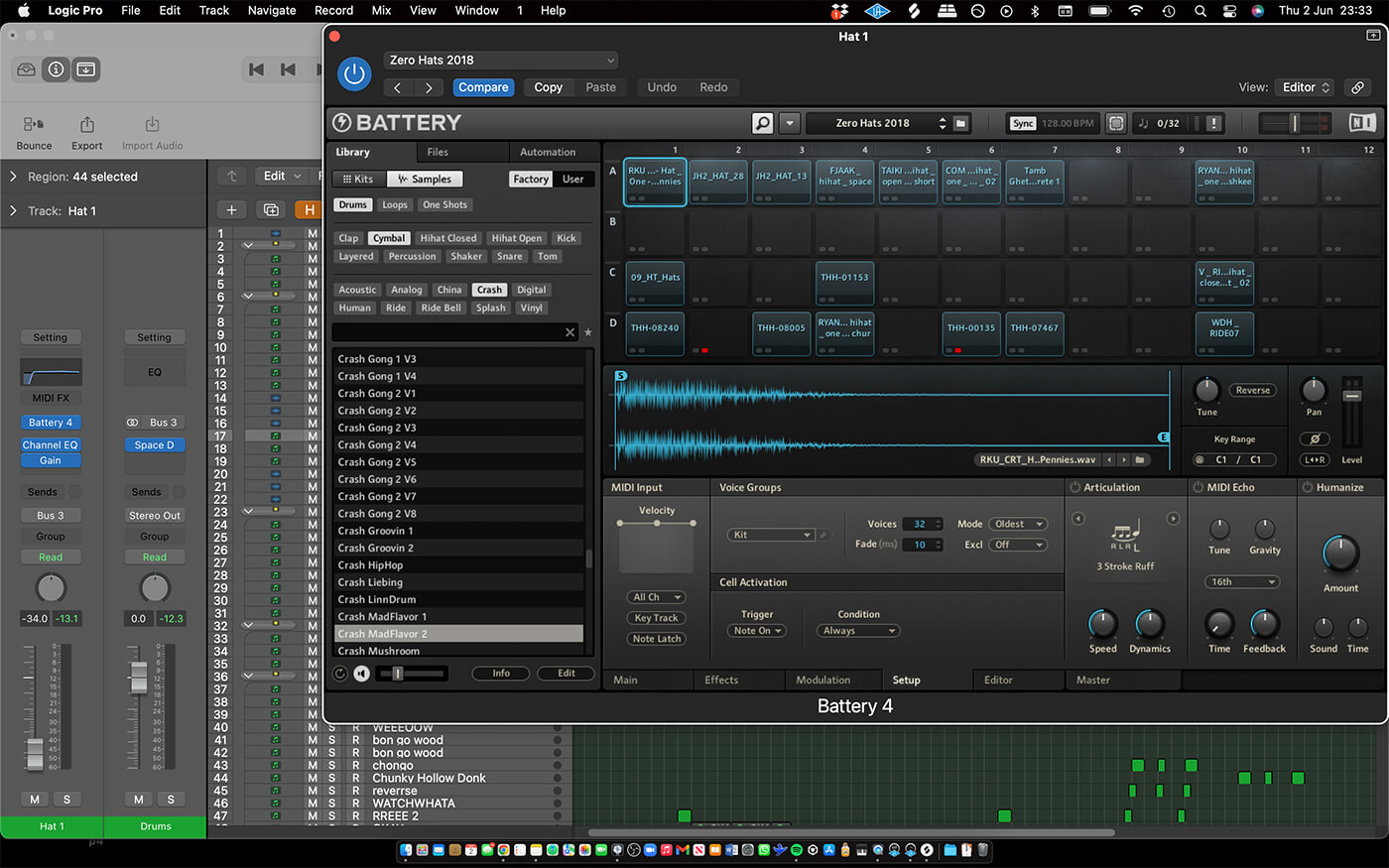 The big thing in your tracks is the drop and that gritty bassline riff is always so integral. What did you use to create that main bass part in Feel So Free?

Have a guess! Xfer Serum, obviously. [laughs] I spoke about that detuned saw bass earlier. Well, it’s literally that but not detuned and with one of Serum’s special ‘Allpass’ filters on it instead of a high pass. It turned the synth into this kind of 808-sounding gritty white noise stab.

That distinctive Zero bassline subtly creeps its way in during the breakdown. How do you then give it that extra punch after the drop?

Two things I’ve always done since day one that I actually learnt from dubstep/riddim producer Virtual Riot is, firstly, always cut your mid basses (the main synths that create your bassline) at around 100hz, and then create a separate sub- bass instrument that follows the bassline note for note, so that you can have independent control over how powerful it is, also making it way easier to mix as well.

During the buildup, for me, it is essential to not give them [listeners] too much bass before the ACTUAL bass comes in.

So usually, I have my buildups start off powerful and bassy so you know it’s about to go down, but the closer it gets to the drop, the more frequencies you filter out. So that when you finally do get to the drop, it hits so much harder, as the listener has been completely stripped of all bass frequencies for at least 4-8 bars. 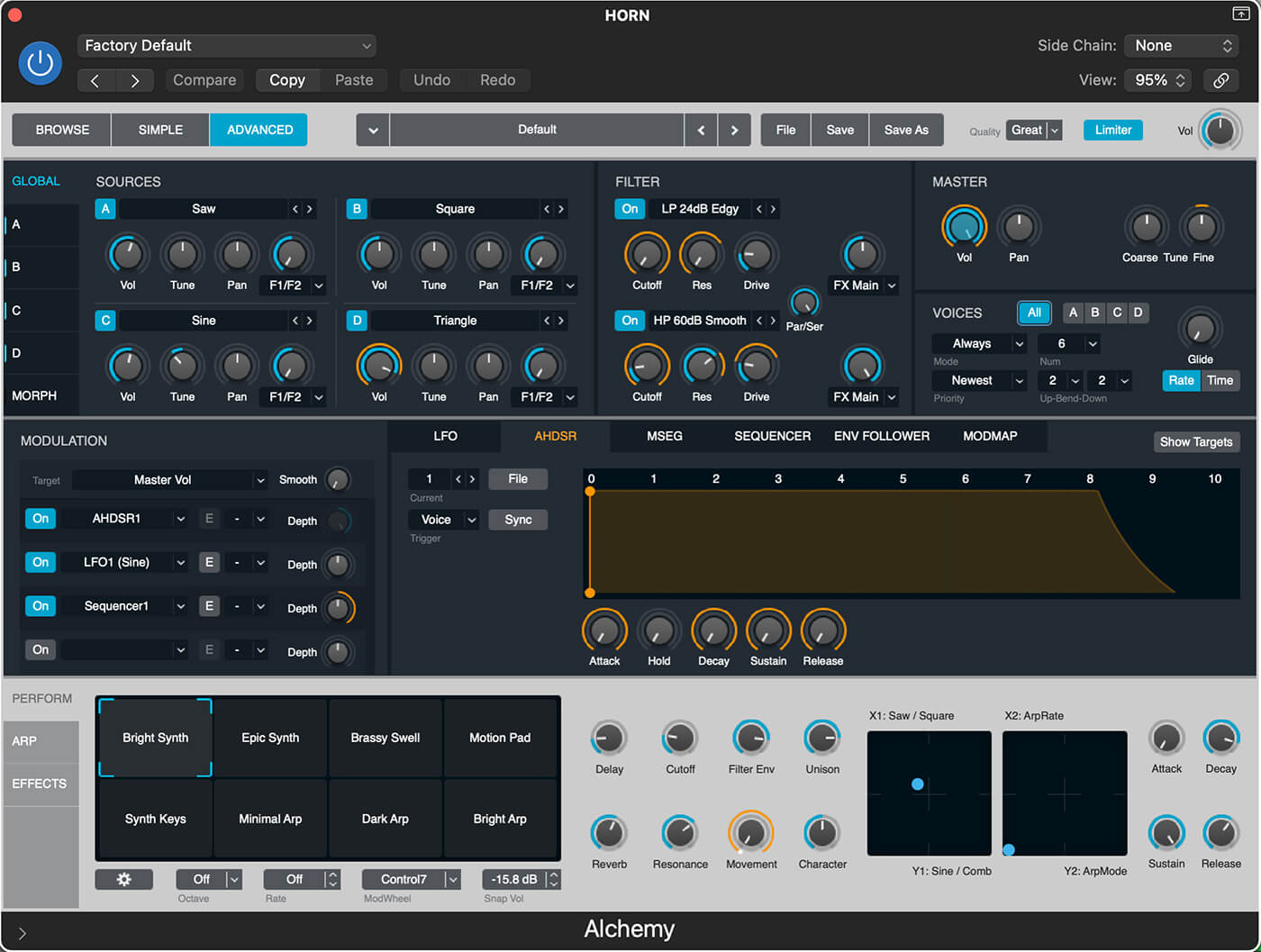 Do you have any secret sauce plug-ins?

Battery 4 by Native Instruments. I could not live without it. Well, again, I probably could but life just wouldn’t be the same.

To me, the most important aspect of drums is layering, which is why samplers are great because you can seamlessly layer, say, five different claps and snares together, for example, tune them, change the decay, take the lows out, distort them , add reverb etc – all in one plug-in, and then have them all trigger together at the same time on a single note?! Bliss.

What about a guilty pleasure plug-in?

Sausage Fattener. I do really use it a lot. But, the LFO tool for me really is the BEST and EASIEST plug-in I think I have. Sidechaining in Logic is a bit of a pain so when I found out about LFO tool it fully changed the game for me. I use it on so much, mainly my sub and my mid basses, but overall it just makes everything sound really good.

The full EP, Feel So Free (Guilty As Charged) will be tricked out over the summer of 2022. Stream single Feel So Free here.