Blindsmyth’s deep, hypnotizing sound has been likened to that of DJ Koze, Bonobo, Moderat and Four Tet but, above all, Blindsmyth’s priority is to create emotive music that sounds organic. Real name Simon Schmid, the Berlin-based producer released his debut album Blind in 2018, a collage of emotional and musical moments from his life. His second album, All That Fiberglassis out on 18 February and sees Blindsmyth critique the digital world and its challenges as an artist.

Boasting sounds from Blindsmyth’s self-built instruments and hardware, and vocal manipulations, All That Fiberglass has a distinct analogue feel. It’s no wonder – the producer has spent a considerable amount of time collecting foley sounds and chopping up samples. We dive into his Berlin apartment to learn about his atypical setup and why he can’t go anywhere without his custom-made Axoloti effects board.

Hey Blindsmyth! Congratulations on your second album, All That Fiberglass. What’s changed for you in the time since Blind?

My sound palette is way more focused. I made Blind Over almost five years and you can hear in the new tracks that I’ve evolved since that period. With All That Fiberglass, the creative process was more or less two years and, importantly, it’s a concept album.

READ MORE: Beginner’s Guide: How to build a music production setup for under $500

How did you approach the music differently for this album?

For me, the clue was to use my live performance rig as a production setup to find ideas, which involves using a lot more hardware. Most of the synth parts are from the Sequential Tetr4 or the Korg Ms-20. All the harmonised and vocoded vocals and the xaphoon were processed through the TC Helicon VoiceLive Touch 2.

With many of these devices, I did a creative back-and-forth: I’d play a line on the synth and record both MIDI and audio, then I’d rearrange the MIDI data and send it back to the synth. This allowed me to record multiple performances where I can tweak the parameters. Then, eventually, I edited it into the final piece.

I used similar techniques with the Vocal Harmonizer. This gives all these electronic elements an organic and lively feel. I did the same for a lot of the effects and chopped up samples, both of which are self-programmed with the open-source audio platform, Axoloti.

What drove you to use a lot of field recordings in this album?

Field recordings let me create this personal connection with sound. When you hike up a mountain, record the sound of stones crashing down the mountain and use that in a track and you will always remember that special moment. So, I always have my field recorder around and create a little sound diary, with found sounds on the album from gigs in Ukraine, Turkey, Switzerland and Germany just before the pandemic.

I look specifically for percussive sounds in nature and in my environment. This could be drumming on a tree or using various forms of natural noise as a replacement for white noise, such as processing a waterfall to sound like an electronic shaker. 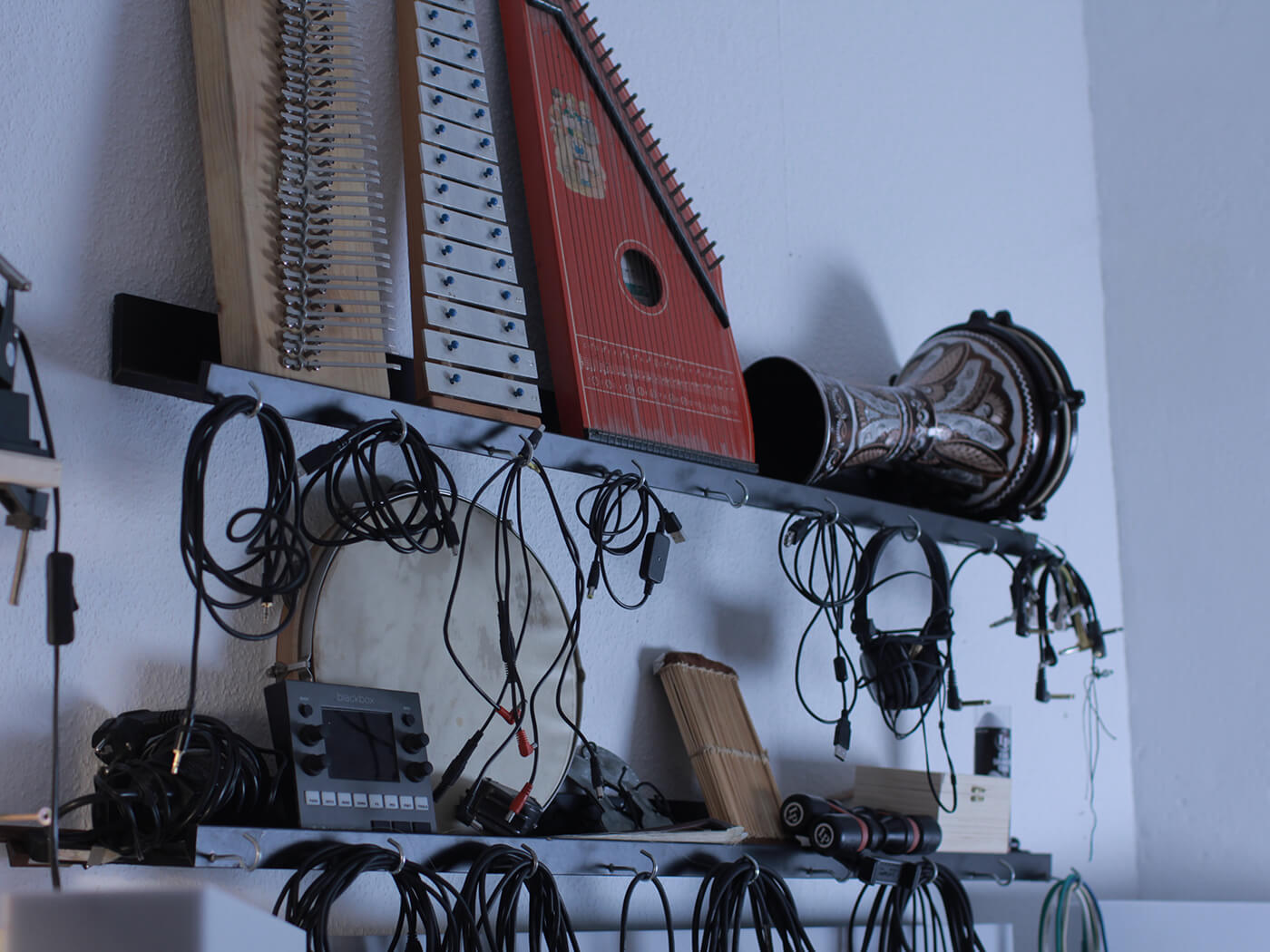 Tell us a bit about the studio.

It’s a home studio in my apartment in Neukölln, Berlin. I’ve lived and created at this place for the last seven years and I’m happy here. It’s like a mini house, attached to the main building in the courtyard. So I have my own entrance and I don’t have any direct neighbors that I would disturb with my music. I also love that there is a community garden; I like to sit there in summer and have coffee while checking my work on headphones.

I use it to record both instruments and vocals and arrange and complete full tracks. Lately, I started using the studio of the Electronic Music School in Berlin where I teach. Being able to check my mixes in a clean, acoustically treated room helps me make better choices and understand the issues of my studio. Once you are more conscious about the problematic frequencies in your room it is easier to work around them. 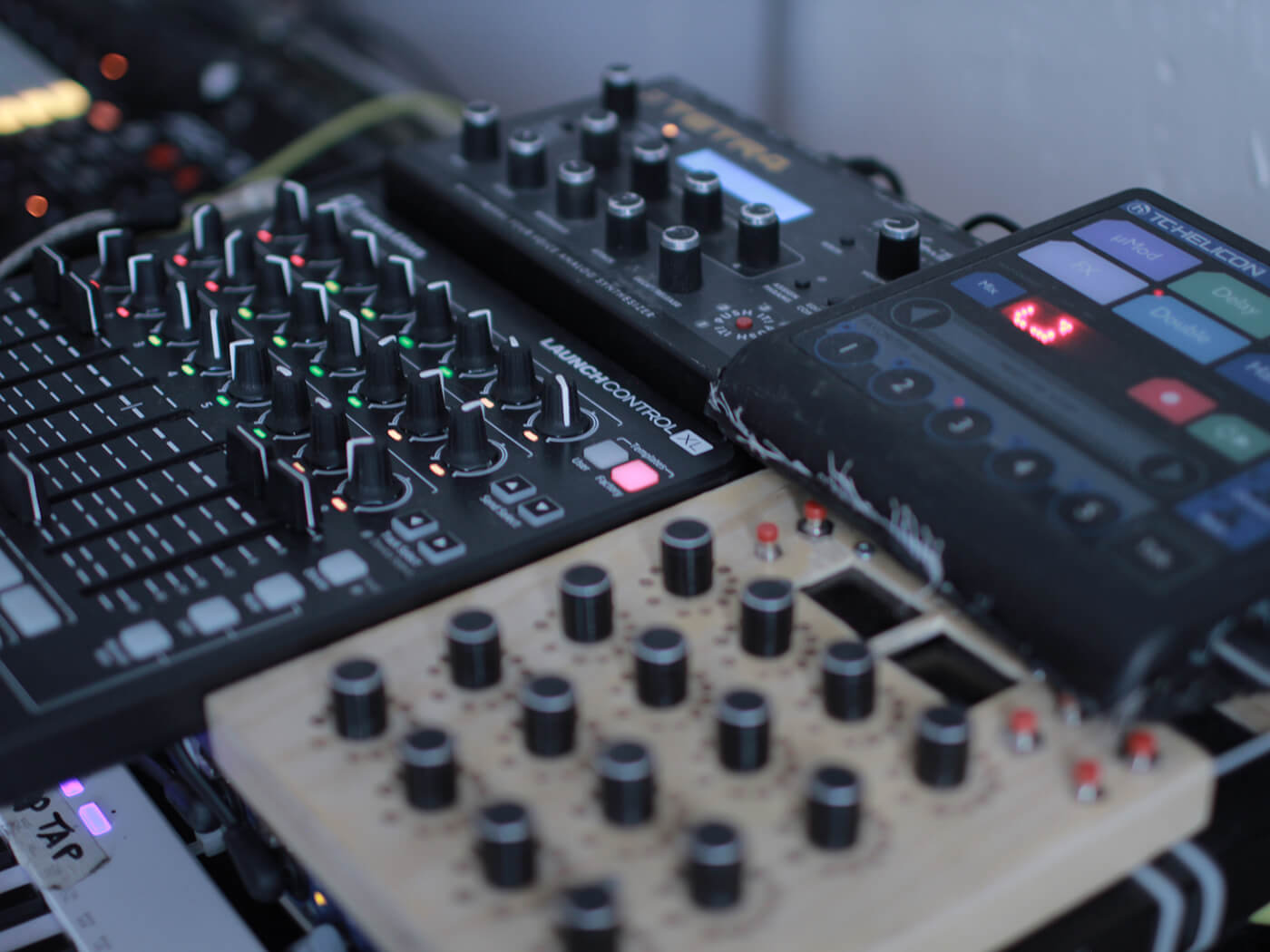 What atmosphere do you try and create in the studio and how does the studio environment help you with your creativity?

I like to create a warm, cozy atmosphere and surround myself with a select palette of instruments. I am not the kind of guy that needs 10 different synthesizers – I’d rather have two or three and make the most of them. This is the classic concept of limiting your options to boost your creativity, I guess. I also love having a lot of acoustic and percussion such as shakers that I collected from traveling around.

I also build instruments on another desk next to my studio and I often incorporate these in my production. Somehow, this fuels my creativity a lot. The best example is this chromatic kalimba with microtonal tuning magnets. It became a starter for many of the tracks on All That Fiberglass. 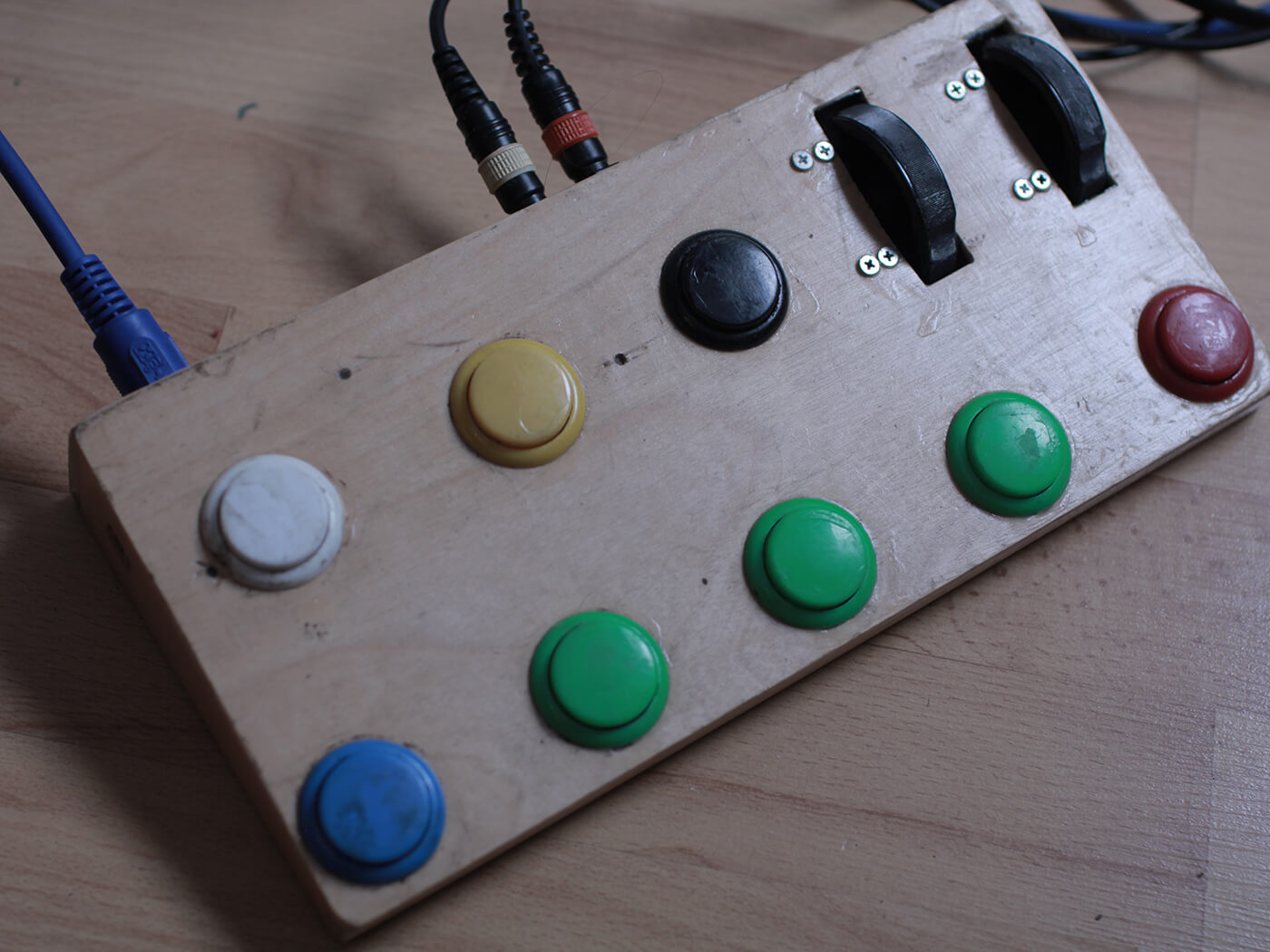 I use Bitwig and Ableton Live. The older tracks on the album are made with Ableton but I switched to Bitwig because I wanted to try something new. The main motivation here was the grid in Bitwig and its modular layout. I love to take acoustic sounds and then process them through synth-like patches in the grid. That could be filters, envelopes, waveshaping, modulation – all the modular goodness.

I also appreciate that microtonal tuning is made easy in Bitwig. For most of the tracks, I use intonation or an approximation of it. I love the resonant sound of pure major and minor thirds – it has a certain peacefulness that is hard to create with equal temperament. It bugged me that equal temperament is like a built-in detune that you have no control over, and that in Bitwig you can easily create your own tunings with the micropitch.

I also like switching between two programs because it breaks bit habits of doing the same things over and over again. 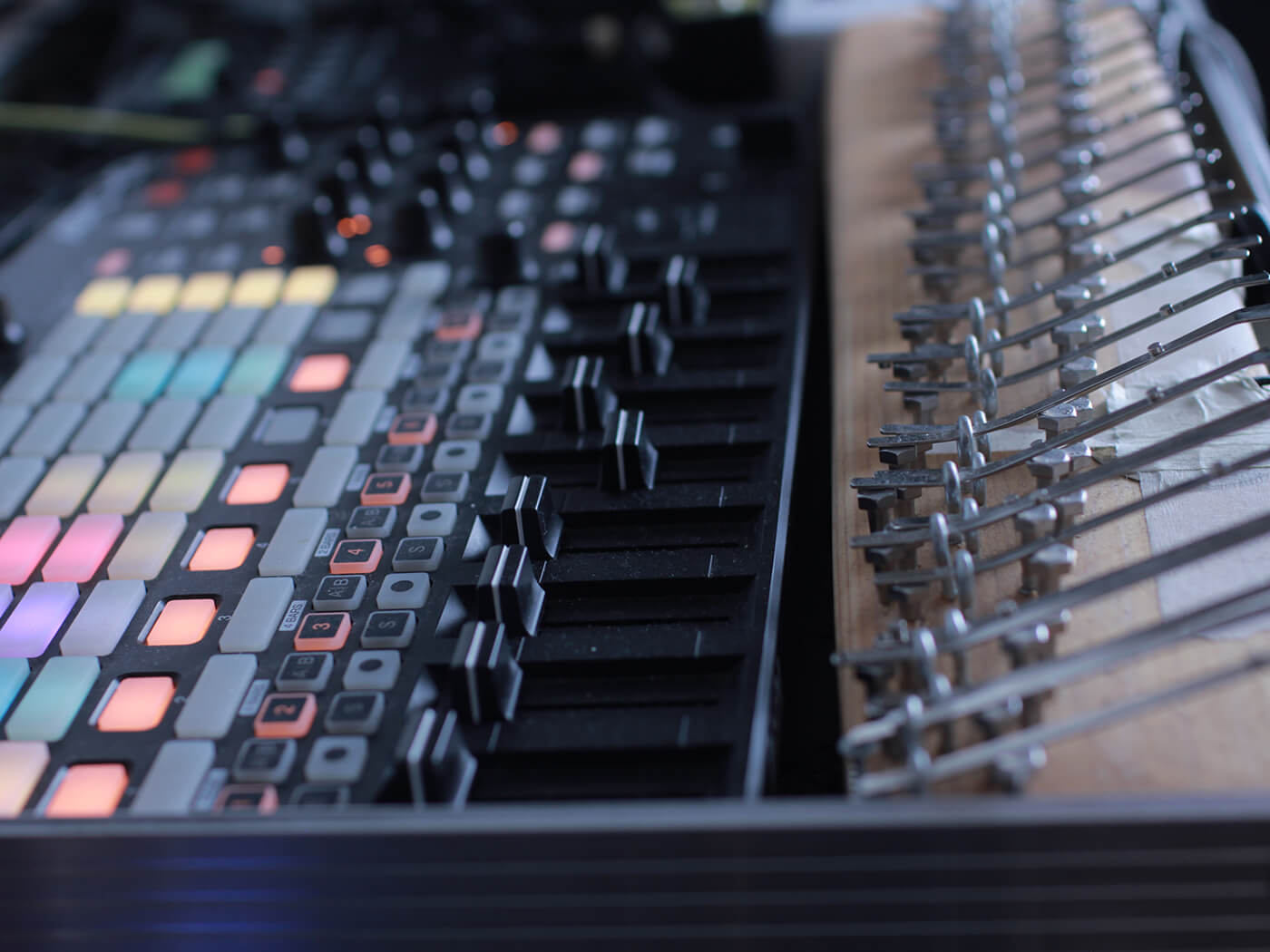 I would say the Axoloti Board. It is a little piece of open-source musical hardware. You can program it yourself with a visual patching environment, similar to PD or Max, and then upload your creation to an SD Card.

I have four of them in my studio and have created a multitude of sound processors: a microtonal tuning interface, granular samplers and effects, a traditional looper and a guitar effects pedal. Some of my boards are hidden under my live setups but you can see also some in the pictures. It is these self-built strange-looking wooden boxes.

What synth or effect can be heard the most on the album?

Definitely the Tetr4. I love how rich this synth sounds but how minimalistic the layout is. The fact that you can only tweak eight parameters at the same time forces you to get the most out of each tweak. I love that the release parameter controls the decay and release of all the envelopes and I can make dramatic changes in sound with very minor knob movements. 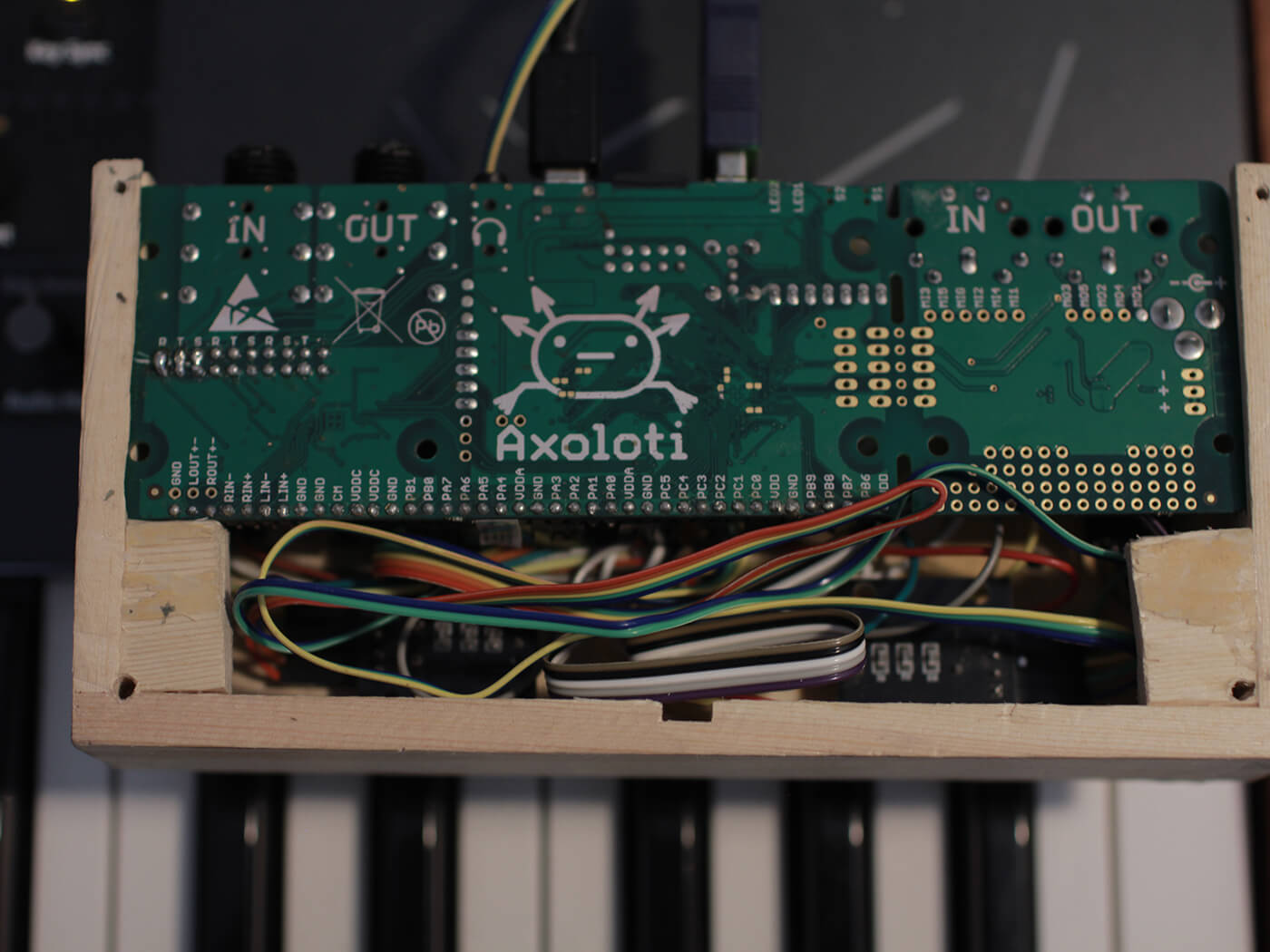 The album features plenty of chopped up samples and sound bites. How did production techniques like this help you convey the theme of digital world problems?

I like to go deep in the connection between sound aesthetic and concept. The processed harmonized vocals, for example: I love how it sounds like a digital mirror of a human voice, an artifact trying to break out of its digital boundaries.

The same goes for all this digital noises and machine glitches that I put into various tracks. I also built this patch that samples little fragments of sound and plays it back in rhythms based on the euclidean algorithms at various pitches. I think there couldn’t be a better metaphor for how algorithms are influencing almost every aspect of our daily lives. These kind of connections help to create a very coherent sonic microcosmos where I each element is connected with the other elements at a very deep level. 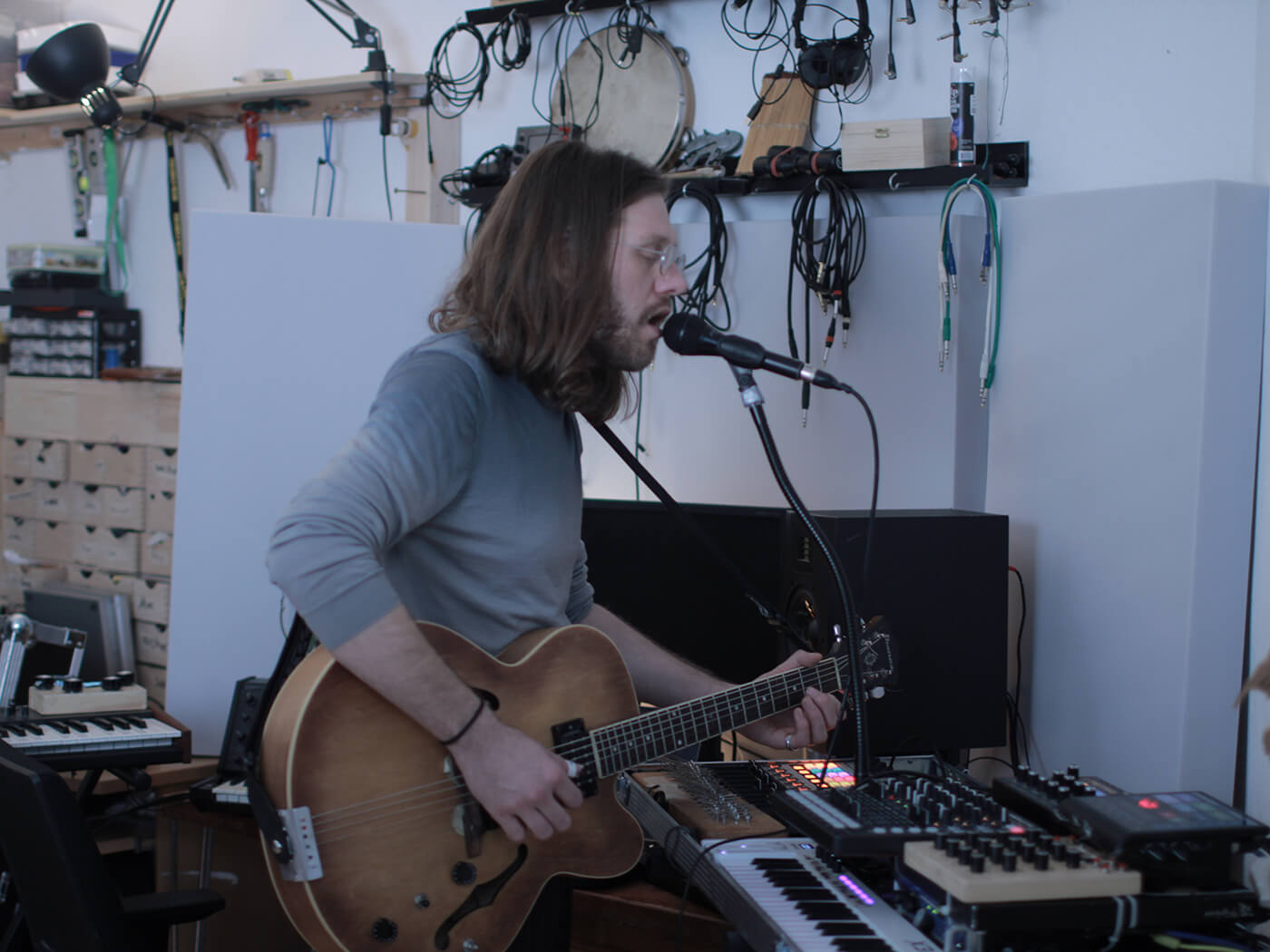 Definitely the RME UCX. It’s such a sturdy piece of gear, with rock solid drivers that have decades of support. I have all my instruments and effects hooked up to it ready to play and improvise without a laptop, and I made a custom patch on Axoloti to control the mixer and routing matrix from my Novation Launchcontrol XL. 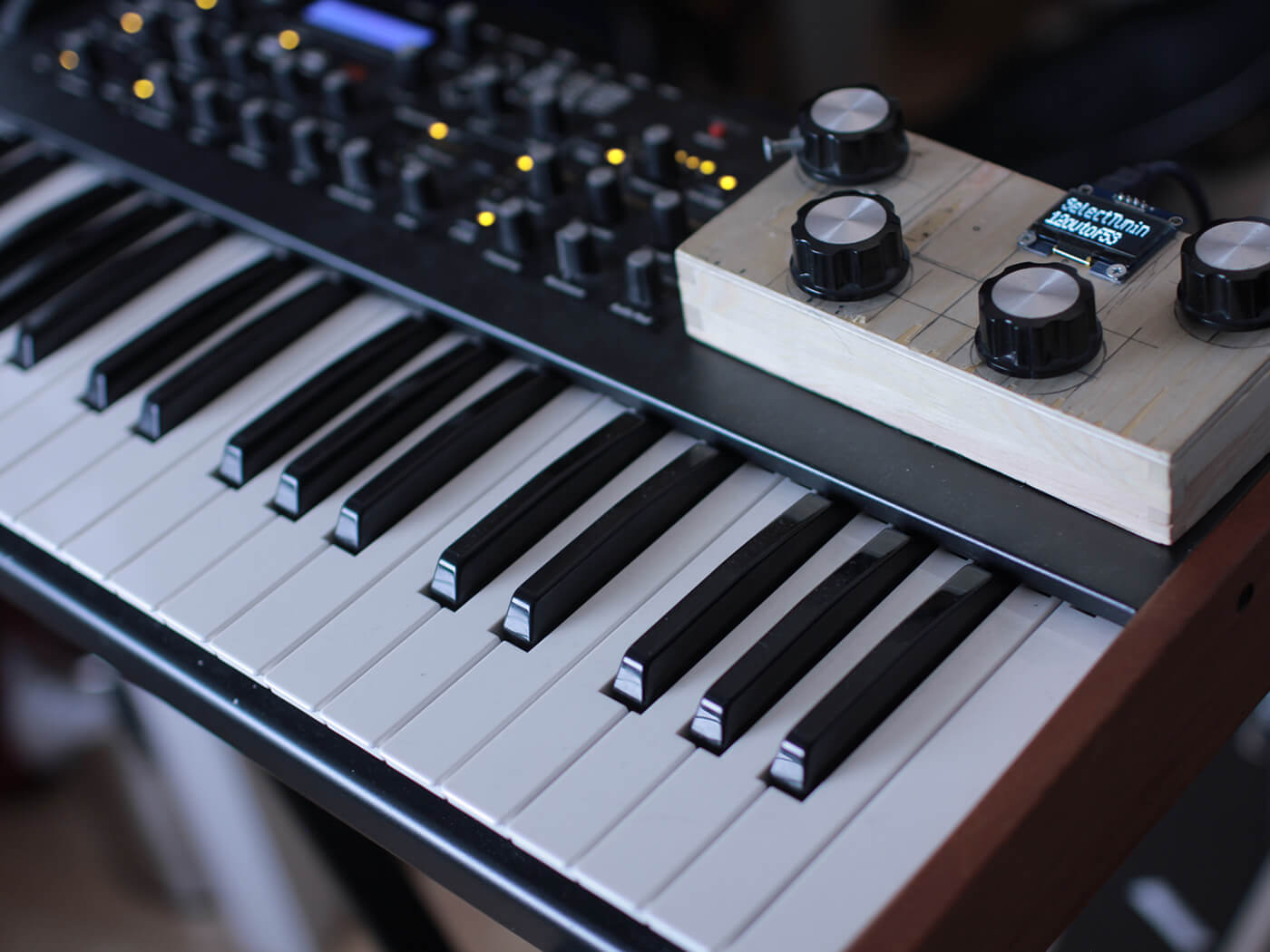 The Stimming/Doctron’s instant mastering chain. I plan on going DAWless for my live performance setup, having the 1010music Blackbox playing back stems, one-shots and MIDI sequences. I do, however, miss a reliable mastering chain that pumps up the sound before going into the main mixer. It looks like they did a great job designing the Instant Mastering Chain.

I would take my Axoloti looper/effects pedal because I built it for this specific purpose! I have been taking it to the seaside, the Sahara desert and a jungle in Kenya to be able to create and improvise and transform acoustic sounds. Or I would hack an acoustic guitar together with a speaker and a solar panel. I think you planted an idea into my head here [laughs]. 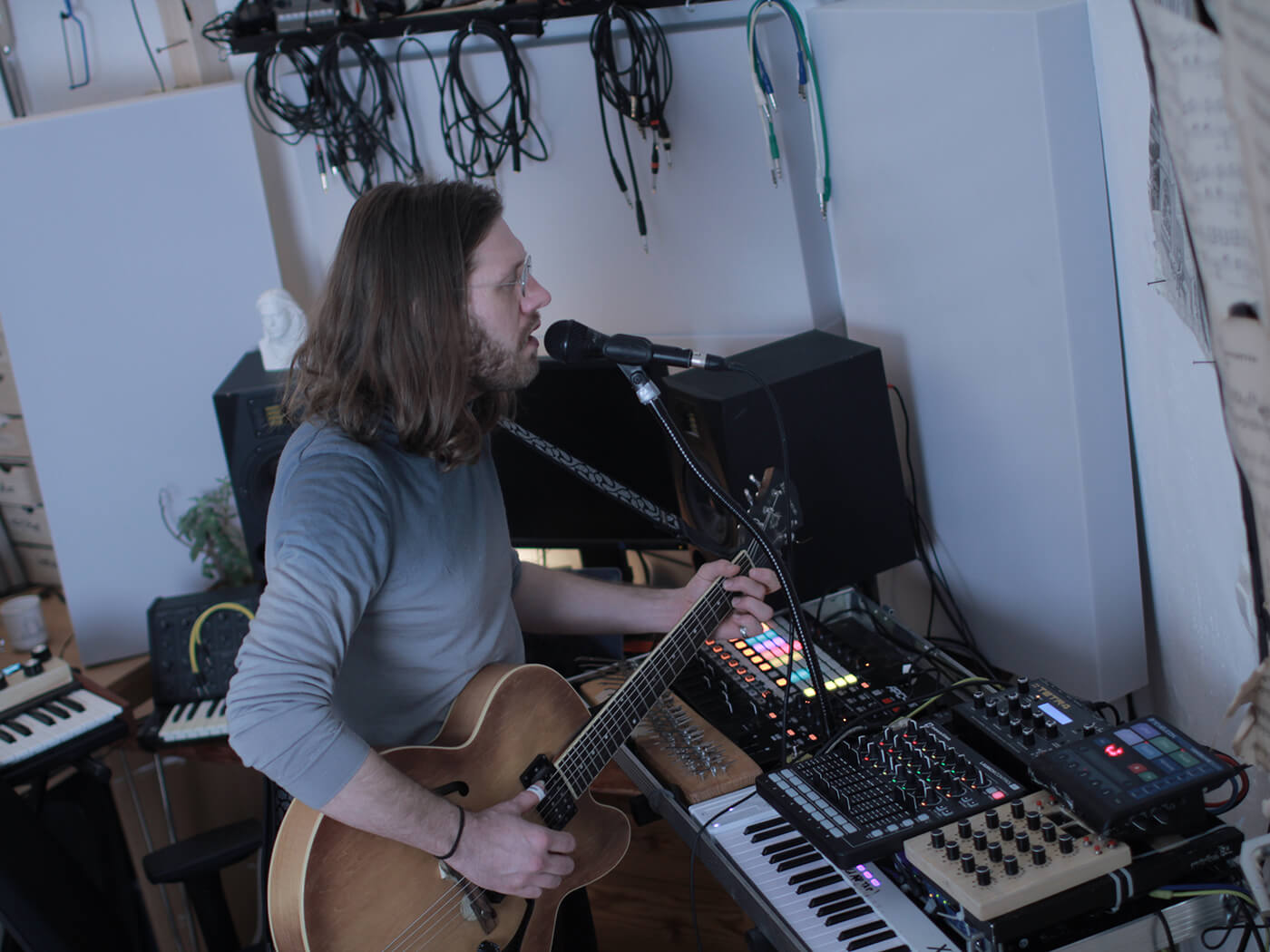 Do you have any frustrations with your current set-up?

Well, I feel limited by its size. I have this DIY/tinkering workshop right next to where I produce. Sometimes when I build a new instrument, things can get a bit messy. I would also love to have more space for hosting jam sessions with multiple musicians, do multitrack recordings and edit this into finished tracks. This might be the point where I would need an external rehearsal room I guess. 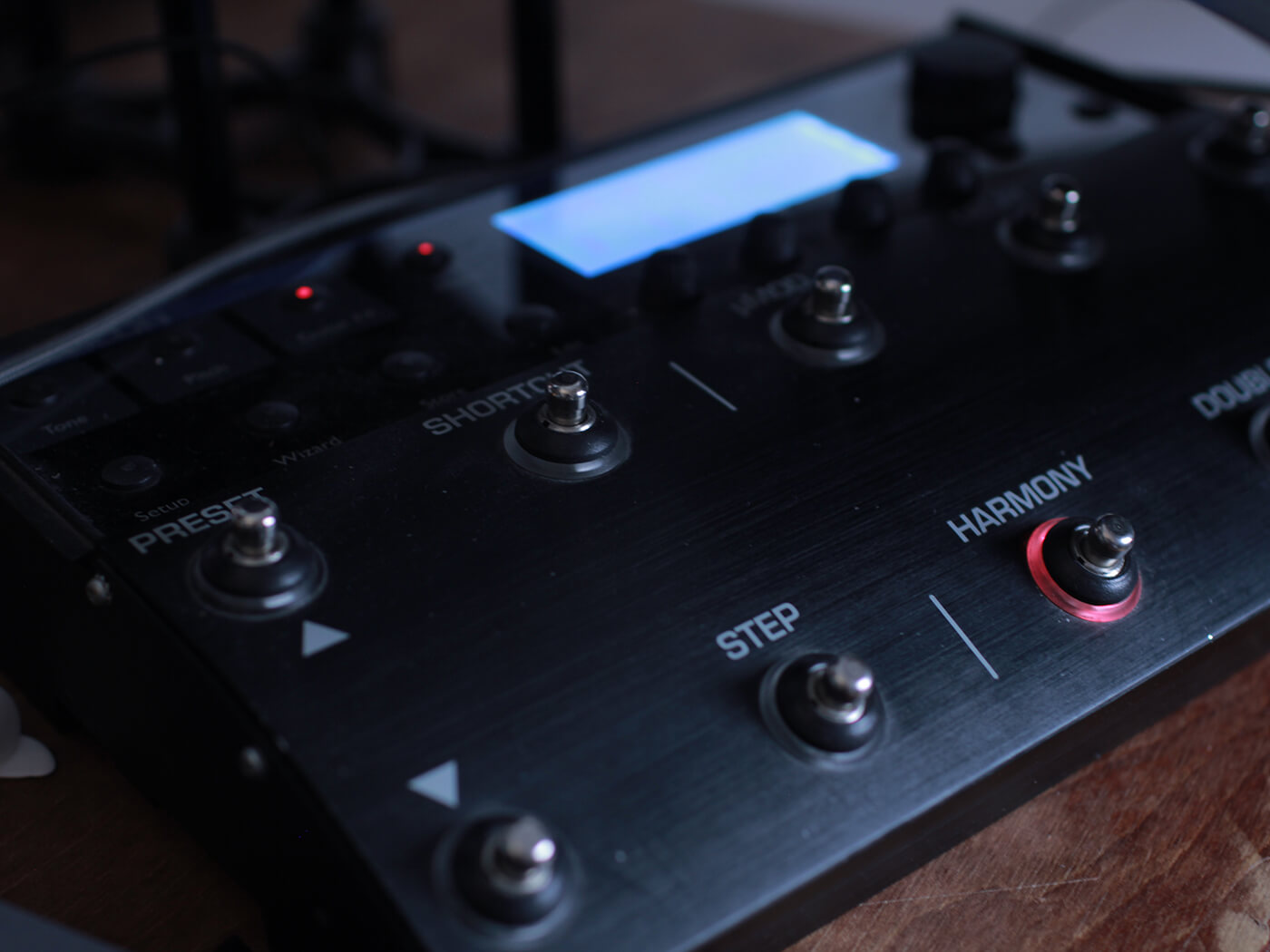 Be creative with the tools you have. It’s good to buy new gear from time to time and get inspired but sometimes what you have is all you need.

Buy good quality gear and expand slowly. Go for the equipment that will last you a lifetime!