Candylandmade up of Josie Martin and Ethan Davis, are back making music together after an eight year hiatus.

Two years after smashing onto the EDM scene in 2012 by winning the remix competition for Bingo Players’ Rattle, the duo parted ways, with Josie continuing the Candyland sound while Ethan focused on a solo singing career.

During this time, they duo say they did a “lot of growing up”, which is evident in their recent offering, Nirvanaon Monstercat records, which explodes with eight years of untouched energy.

In Josie’s unique shipping container studio in a field in Santa Barbara, we find out what’s inside, hear about what it’s like making music together again and how their processes have changed. We also discover how the studio’s environment of “focus and freedom” helped make Nirvana such a solid gold slab of EDM goodness.

Hi both! It’s been eight years since you last released music as a duo. How does it feel working together again?

Josie Martin: In short, we broke up around 2015 because we each had a lot of growing up to do. We grew up a bit, rekindled our friendship, and now we’re back and better than ever. We’re healthier than we’ve ever been and we both agreed to keep Candyland going as long as it’s fun for both of us.

You certainly kept the Candyland name going strong with tracks such as infectious Speechless in 2015. Did your studio process change as a solo producer?

J: It was a massive change. Working with Ethan was all I knew and it was definitely a change I wasn’t prepared for – which is probably why it didn’t last that long. But, for Speechless”, I really lucked out with RKCB. They absolutely killed it on the vocals, which made everything else easy.

Your outdoor container studio is ace. Tell us a bit about the studio.

J: The studio is in a field in Goleta, Santa Barbara. Initially, I built three studios out of shipping containers with some friends from one of my other bands, Fmlybnd. The studios were made in Orange County and stayed there until we got kicked out of the warehouse they were in for being too loud. They eventually found a home in Santa Barbara. And they’ve been here for about a year and a half. I’ve been working out of this storage container for somewhere around three to four years now so I’m pretty attached. 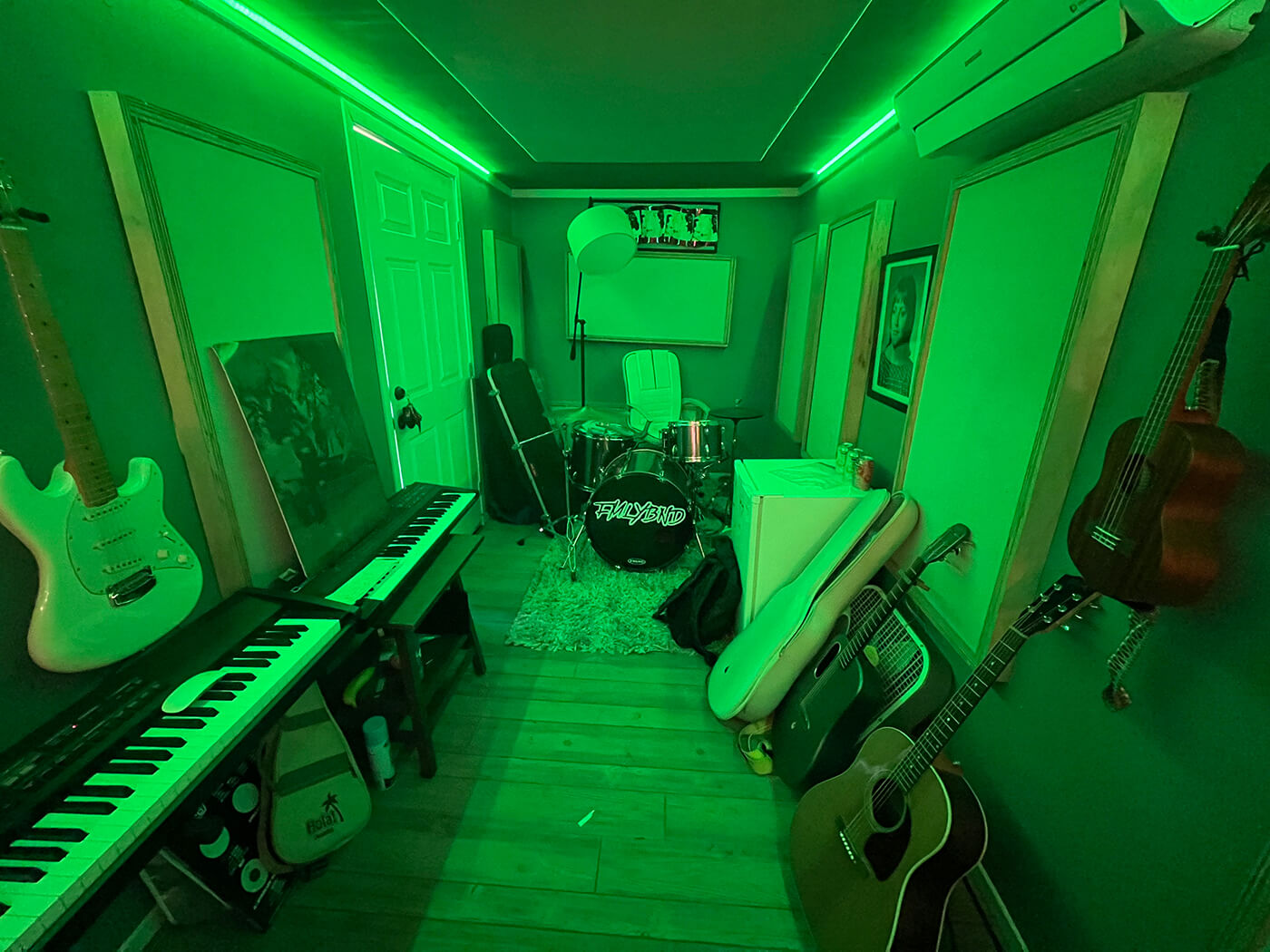 J: An environment of focus and freedom. You need to create a space where people feel the freedom to express their lyrical and musical ideas. Once there’s a sense of safety and a willingness to try whatever ideas pop into your head, you’re well on the way.

How does the studio’s location inspire you?

J: It’s just a couple of blocks from the beach so anytime I need a break I have some good options. The other studio is right near it as well. Those are full of other writers/producers/friends so it’s fun to check in on the others and see what they’re up to. 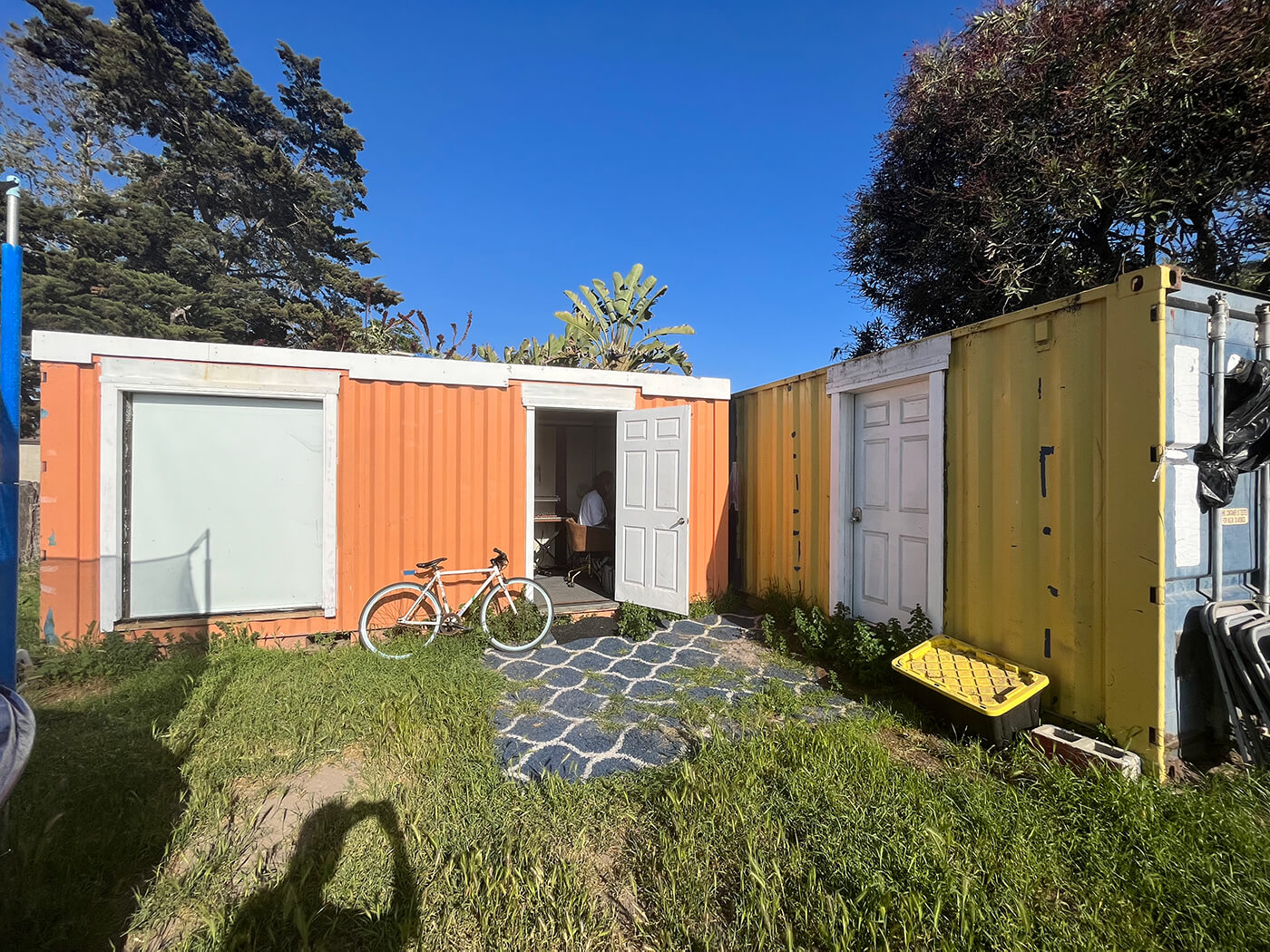 J: I use it for everything: writing, recording, mixing, and mastering. I have all the instruments I use in arm’s reach which is wonderful for the creative process. Sometimes, I wish the room was bigger but there’s a certain charm about the small shipping container.

J: Ableton Live because Skrillex uses it. To me, it’s the most convenient for getting what’s in my head to come out of a pair of speakers.

J: My computer because, without it, I wouldn’t have a career. As far as instruments, I sure like my Gibson J-15 acoustic guitar. I named her The Dutchess. I’m not fully sure why. 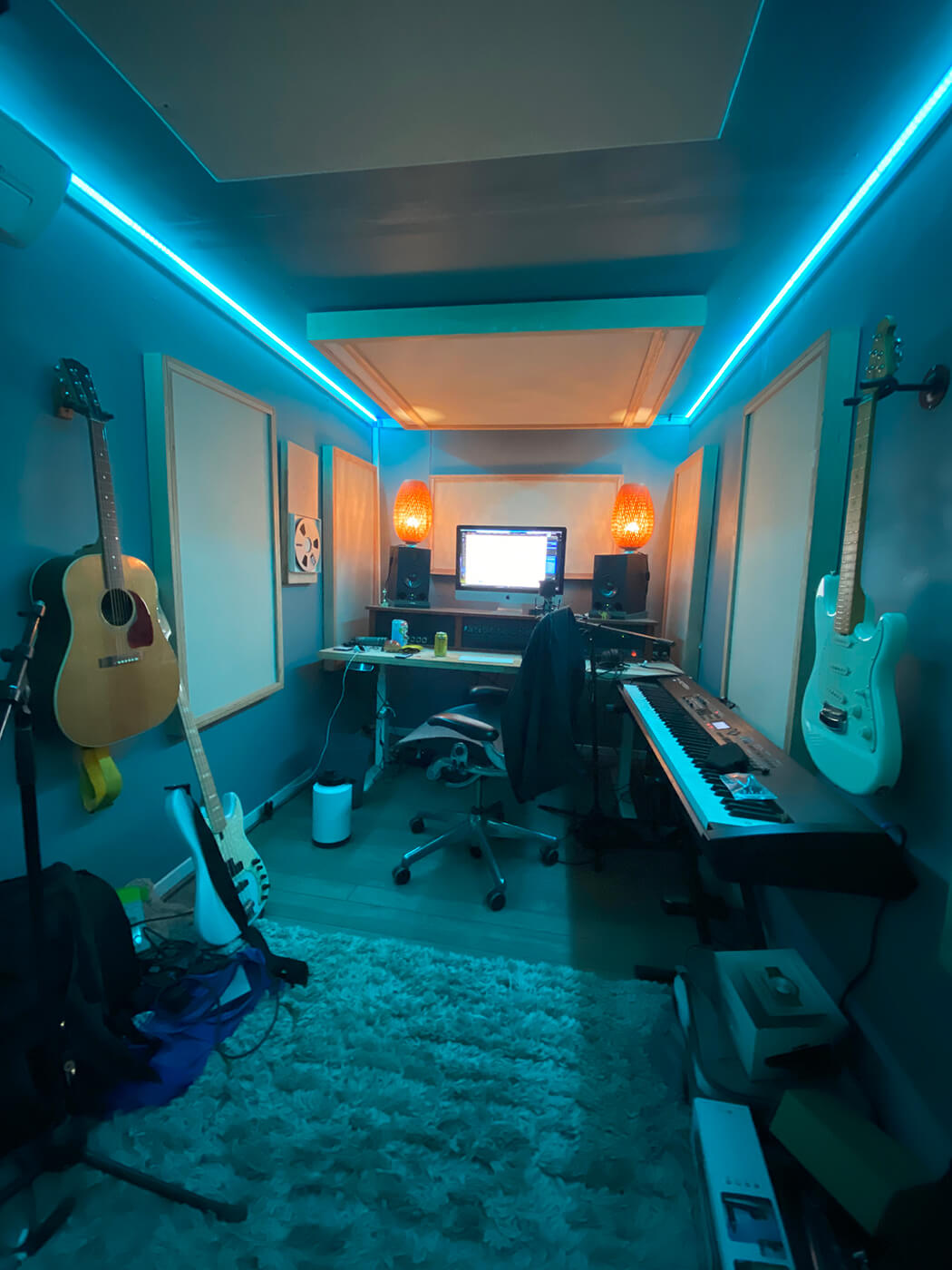 Nirvana has that signature EDM/trap vibe, but the breakdown lets Ethan’s emotive vocals shine. What tools were used in the breakdowns?

Ethan Davis: Xfer Records’ Serum for most of the synth sounds. I also layered some Harmony Engine by Antares in with my voice; that plug-in does wonders. There’s also acoustic guitar (courtesy of The Dutchess) and some Rhodes I believe.

Ethan, your vocals sound great on the track. What effects do you use on them?

E: Compression and EQ. I use a mix of FabFilter, Wavesand Slate plug-ins. My current chain is something like RVox, Virtual Mix Rack, Pro-Q3, Pro-DS, and CLA-2A. However, I’ve experimented and gotten pretty close to the same sound with Ableton’s stock plug-ins. It’s more about how you use the tools than the tools themselves sometimes. 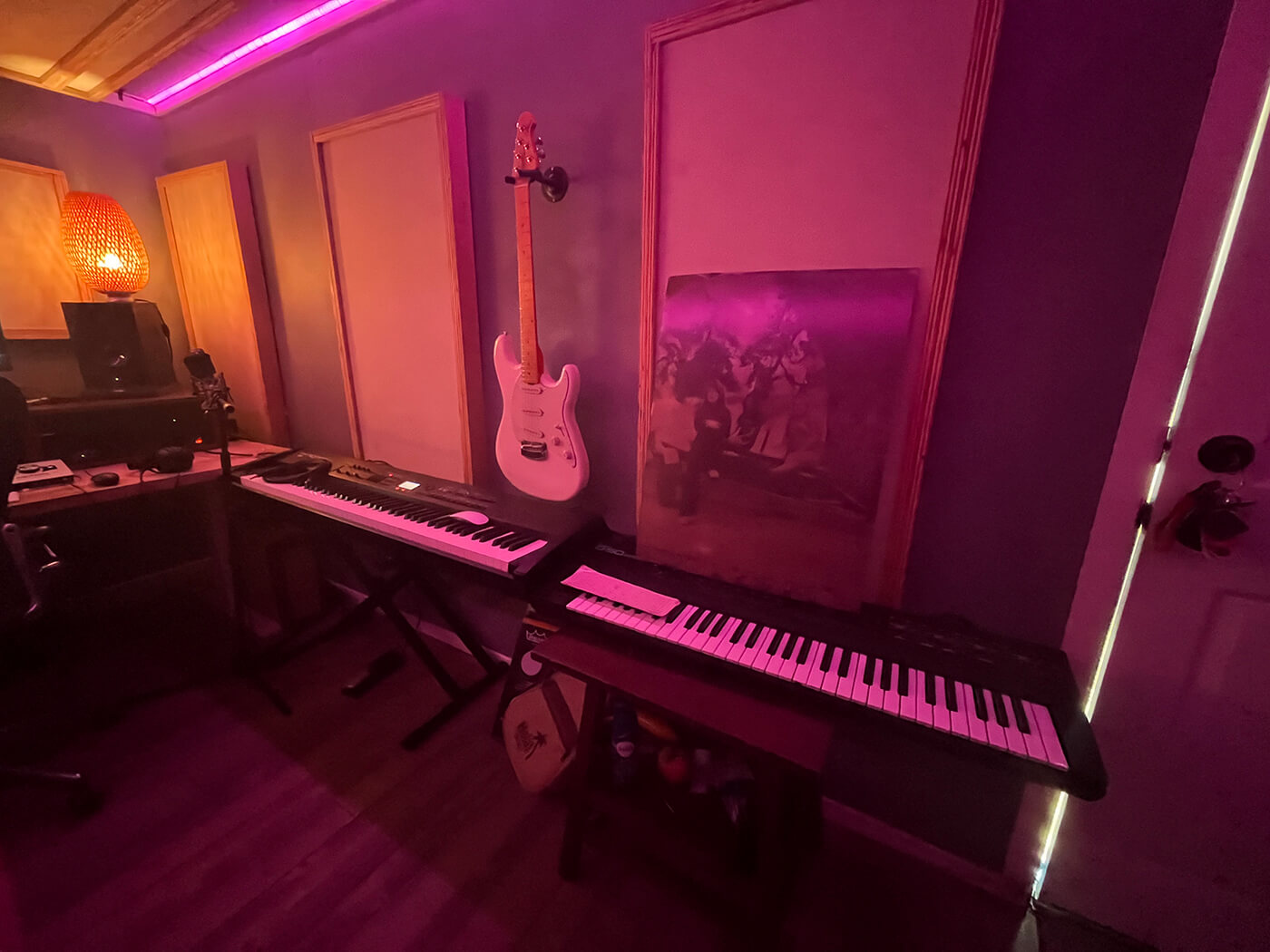 In the main body of the song, we can hear metallic, contorted vocal shots paired with slamming percussion sounds. How did you achieve these?

J: Honestly it’s a mix of three things: Splice sounds. Big White Beats sounds. Serum. Sometimes you just drag in some samples, chop things up, add OTT (multiband compression preset in Ableton), and get lucky. I just kept doing that until it sounded like a ‘thing’ and not just noises.

J: My iMac and Macbook Pro. If I didn’t need to travel, I could get away with just the iMac, which I was able to get for somewhere around $2,000.

J: Probably some cymbals. I just set up an old drum kit again and it’s been really fun playing it and trying to get some of my chops back. The truth is though, I don’t need anything else. And for a lot of you reading this, you don’t either. Work on getting better at using what you already have. Sometimes people (myself included) focus too much on getting new stuff instead of making more music with the tools you already have. 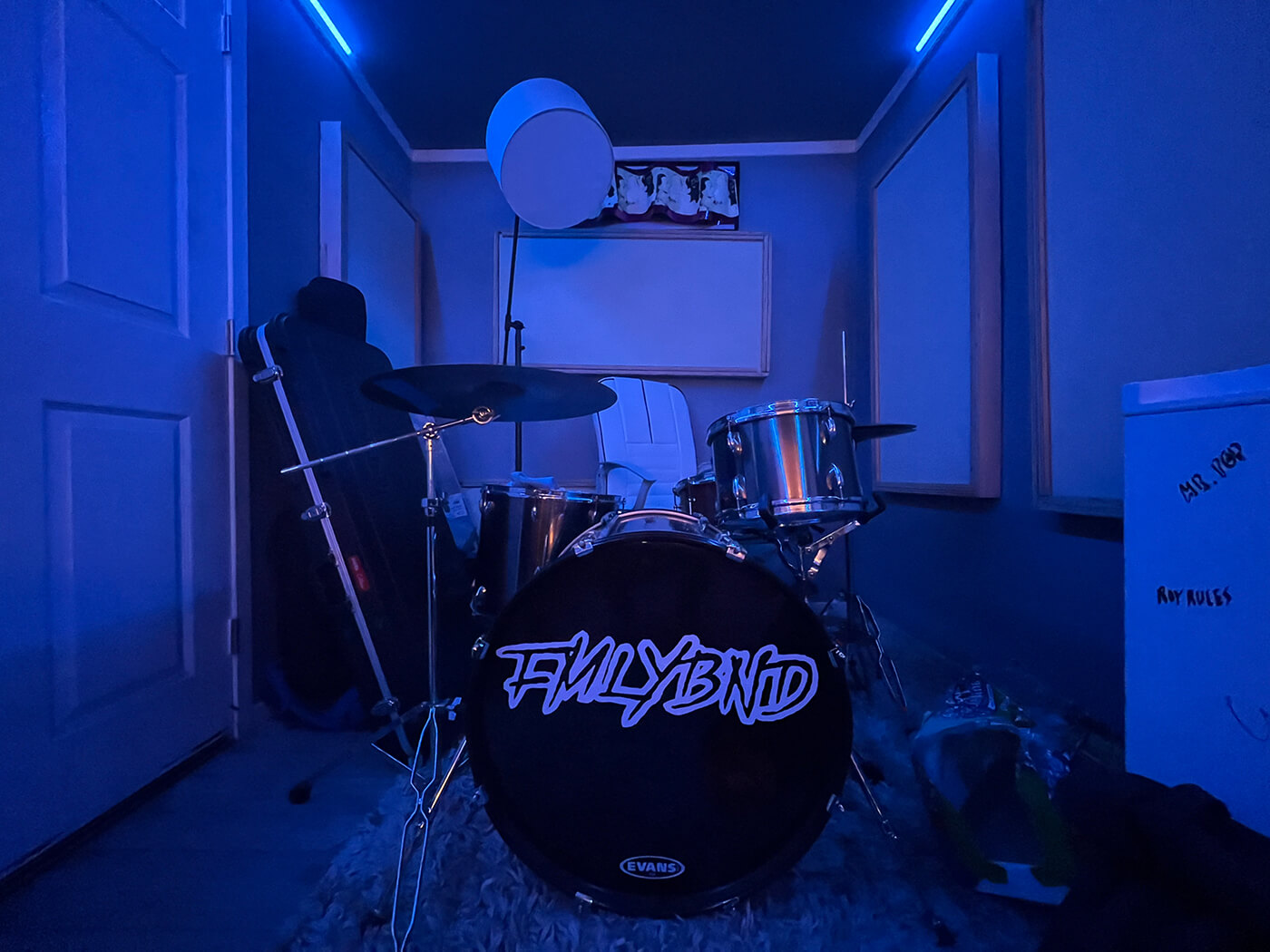 J: I’d bring a travel-size guitar. That way,I could take it with me anywhere and shield it from the elements when necessary. Either that or a gigantic guitar that I could make a boat out of to sail back to the mainland. 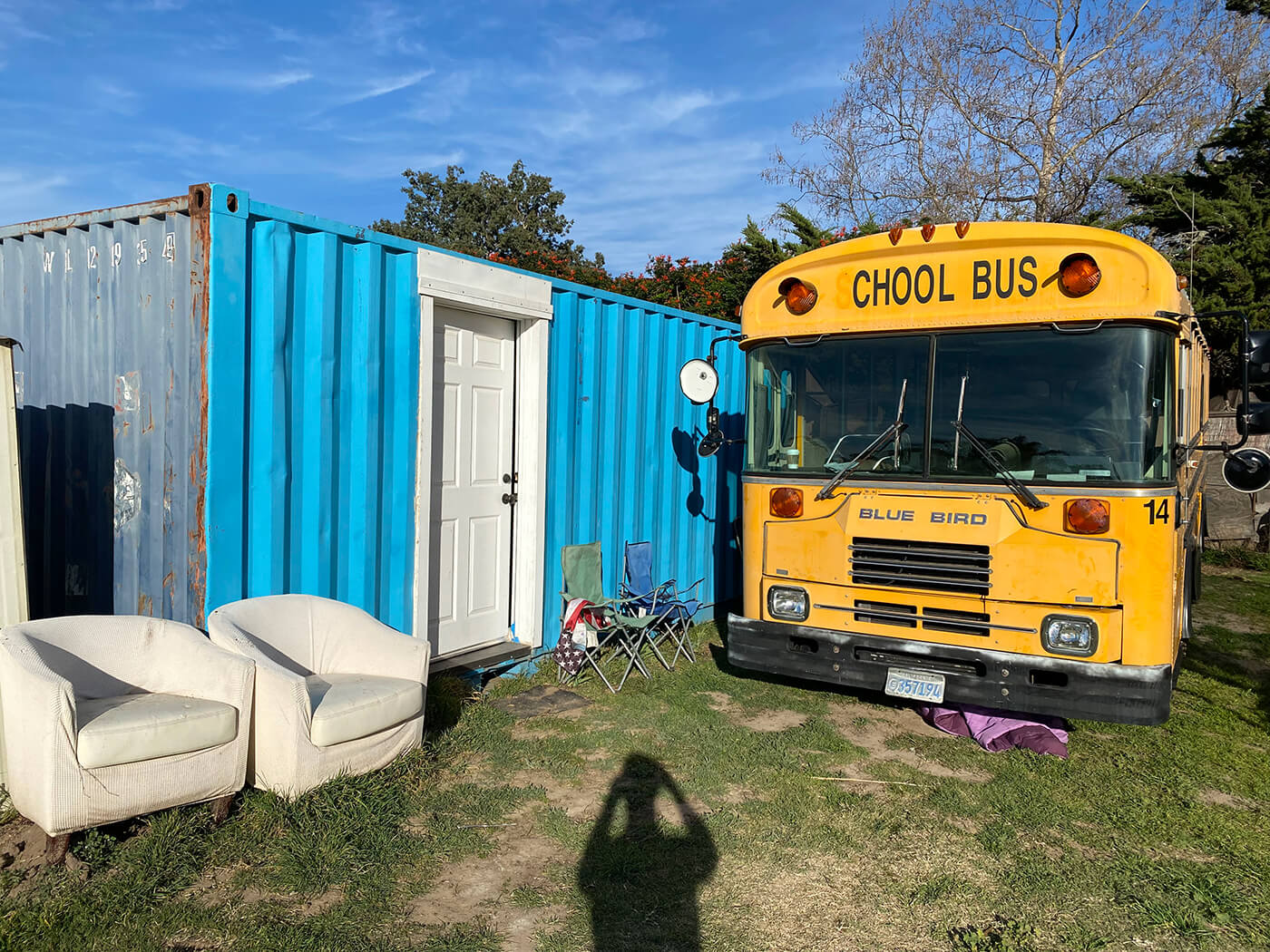 How are the acoustics in the studio?

J: They’re still a bit wonky. We made sound panels which helped a lot. The rug also goes a long way.

Do you have any frustrations with your current set-up?

J: The container is on dirt and weather affects the dirt. One corner of the studio is lower than the rest and I’m currently leaning in that direction. I’d like to re-level it soon. 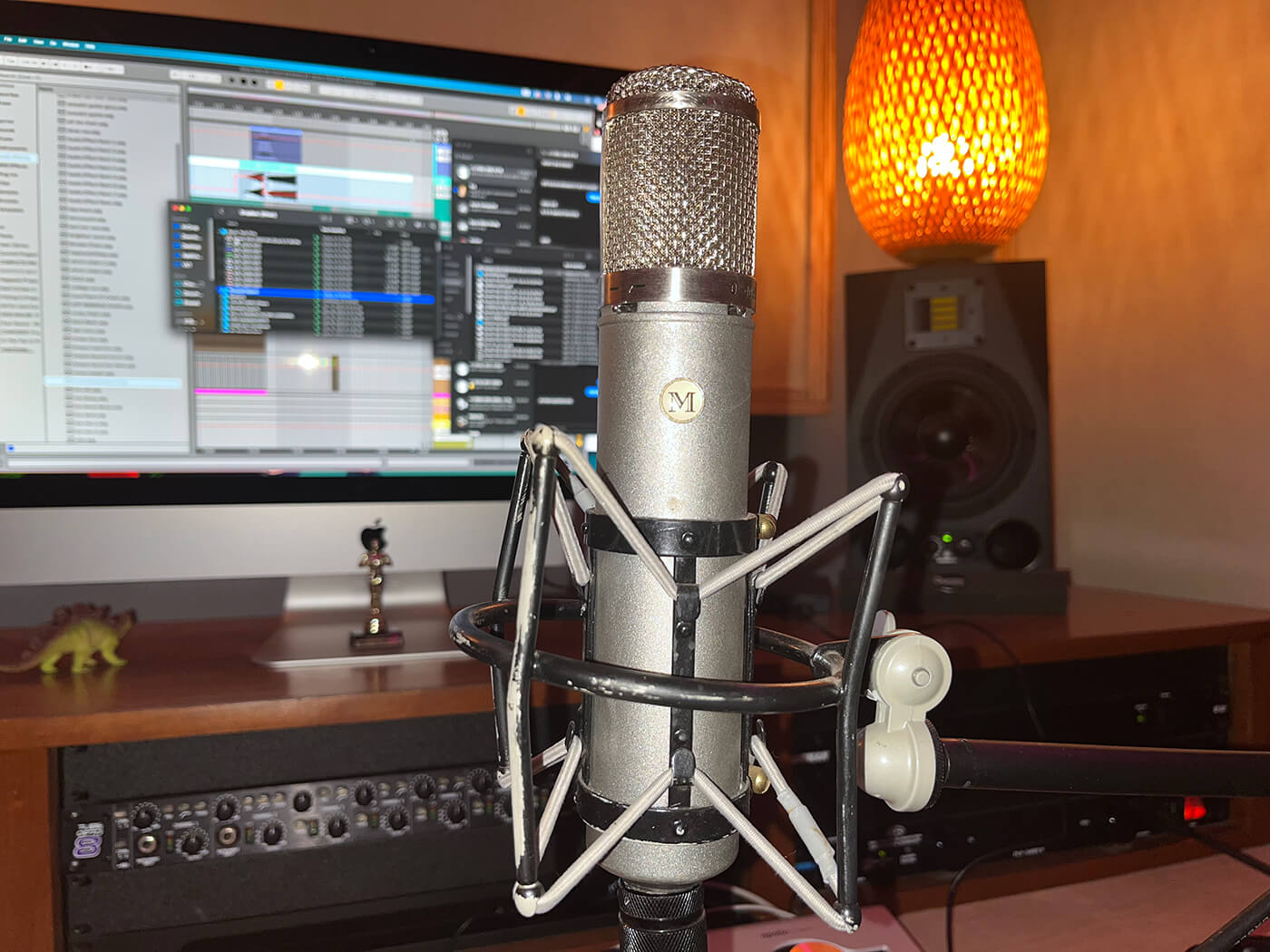 J: Stop making excuses and start making music. Stop waiting for the right moment because there isn’t one. If you have a dream of making music in any capacity, start right now. Stop reading this and go write a song or produce a beat. You need to take action if you want to get anywhere with anything.

J: Don’t spend a bunch of money on a bunch of gear you’re almost never going to use. Get speakers, an interface, a mic, and a computer. See how much you can do with that. If you write songs, maybe get an acoustic guitar or a MIDI keyboard. Other than that, you don’t need anything else to make great music.

One small note about studios specifically: grab some LED light strips with the remote control from Amazon and put them on along the edges of your walls or ceiling. They change the color of the room and it keeps things fun.

Nirvana by Candyland is out now on Monstercat Records. Go listen to it here.