Director May be the first full-length album from Morgan Z Whirledge, AKA Chrome Canyon, since 2012, but don’t think for a moment that the Los Angeles-based composer and self-confessed synth enthusiast hasn’t been busy.

Not long after moving by necessity from New York to the West Coast and releasing his debut album Elemental Themeshe was invited to soundtrack Fritz Lang’s iconic silent film Metropolis live at Cinefamily in the historic Silent Movie Theater in Hollywood. Subsequently, he provided the original score to HBO Max’s acclaimed animated trip Infinity Trainwhich ran for four seasons.

Chrome Canyon’s new record may have influences ranging from Wendy Carlos’ A Clockwork Orange soundtrack to Vangelis’ work for Bladerunner, but the movie it soundtracks does not exist. “Director is meant to accompany whatever it is you’re doing while you’re listening to it,” he has said of the album. “Maybe that’s a long nighttime drive or a psychedelic walk through a city park. The music is meant to augment and heighten the experience.”

Chrome Canyon gives us a tour of his compact but highly functional California studio space, illustrating his love for the Juno-60 and tells us why you should think twice before buying cheap gear.

Hey Morgan! Your new album Director is your first full-length standalone release in almost a decade! Why the wait?

It feels crazy to say this, but I don’t know! I was making music the whole time, just not stuff I wanted to release as Chrome Canyon. I scored several films and ended up writing for Infinity Train, but I did some remixes and released a couple of tracks on compilations in between. It wasn’t until I was looking at some of the material that wasnt used from a few of those other projects that I figured some of it could be great on a full-length record. And I thought it would make sense to release it – after working to make it all sound more cohesive.

You’re a self-confessed synth collector – can you tell us about some standouts of your collection?

As far as collectors go, I’m actually pretty tame. I don’t have any of the insane pieces of kit that turn heads but I collect what I find useful and can afford. The standout for me is the Roland Juno-60, which was my first analogue synth and still basically the powerhouse of the studio. It’s so easy and versatile that it makes getting a rich sound take no time at all.

Beyond that, I can’t get by without the Crmar Orchestrator. It’s one of the synths that I got later on, and it’s still pretty affordable. I got one that had the filter pedal and it’s by far the most expressive instrument I own. It’s incredibly simple – there are crude AD envelopes for the brass section and no MIDI or anything fancy like that – just beautiful, polyphonic richness. It’s indispensable.

Tell us a bit about your studio.

My studio is above the garage in my house in El Sereno, East Los Angeles. It’s a small room but it’s a concentration of the things I like to focus on: synths and small weird instruments, like hand percussion and autoharps. Even though it’s cramped, it sounds really good. I’ve had some great sessions recording in there – for example, doing live tabla percussion or cello. Even some small vocal enembles.

What led you to relocate your setup from New York to Los Angeles?

I had a beautiful studio in New York that I loved but, as is often the case in so many stories, my landlord decided to sell the commercial one-and-a-half-story building I was living and working in, so I had to go. At the time, my rent was ridiculously low for what I was getting and had a huge separate studio space. It had a live room, control room and a whole wall of windows and skylights. It was a magical place. I miss it, but I also feel like it was the right time to get out of the city and I knew I wasn’t going to find anything else like it for what I was paying.

It’s one of those life moments that ended up working out because being back in LA – where I grew up – was the right place for me to be and allowed me to tap into scoring films. It basically started the career I have now had for the past 10 years or so. 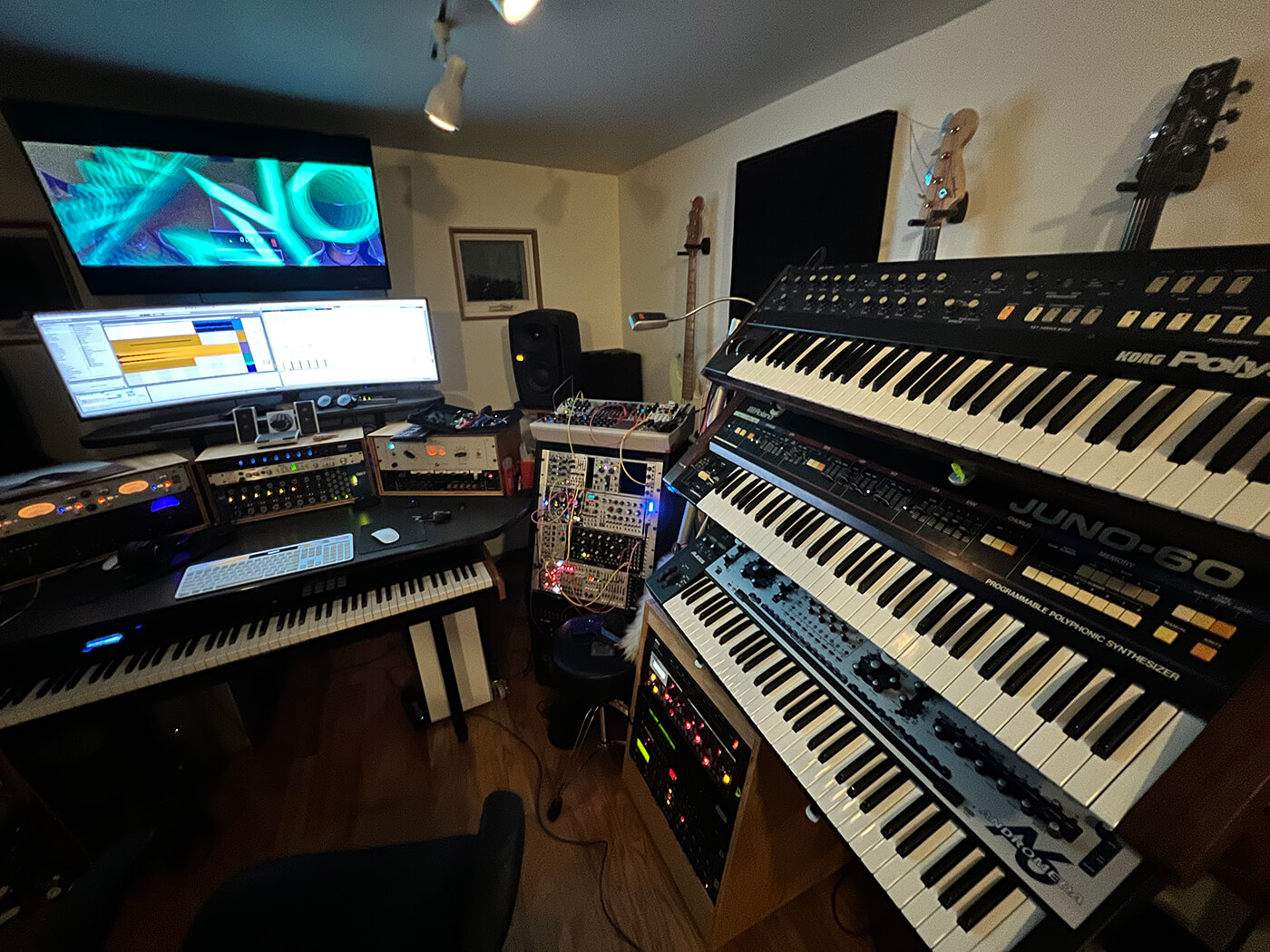 What atmosphere do you try and create in the studio? How does the studio environment help you with your creativity?

My ritual when it comes to working on something new is to spend a few minutes cleaning and organising beforehand. A lot of DIY home studios tend to suffer from clutter and disorganisation, which is a huge block to feeling comfortable and focused. Other than that, some obsidian crystals and Polaroids remind me of how cool and badass I am(!)

I use a hybrid of Ableton Live, Logic Pro and Pro Tools. My main DAW for writing and doing most of my work is Ableton. It used to be Pro Tools, but I switched over to Ableton because of the routing and grouping possibilities. Also, the ease of manipulating audio was really attractive to me. I still use Pro Tools to do some tracking, because up until this latest release of Ableton there were no comping tools, which was the biggest drawback for me.

I use Logic exclusively to lay music to picture if I’m scoring something, because it is quick and easy, whereas Ableton and Pro Tools can be incredibly slow when getting something laid quickly. 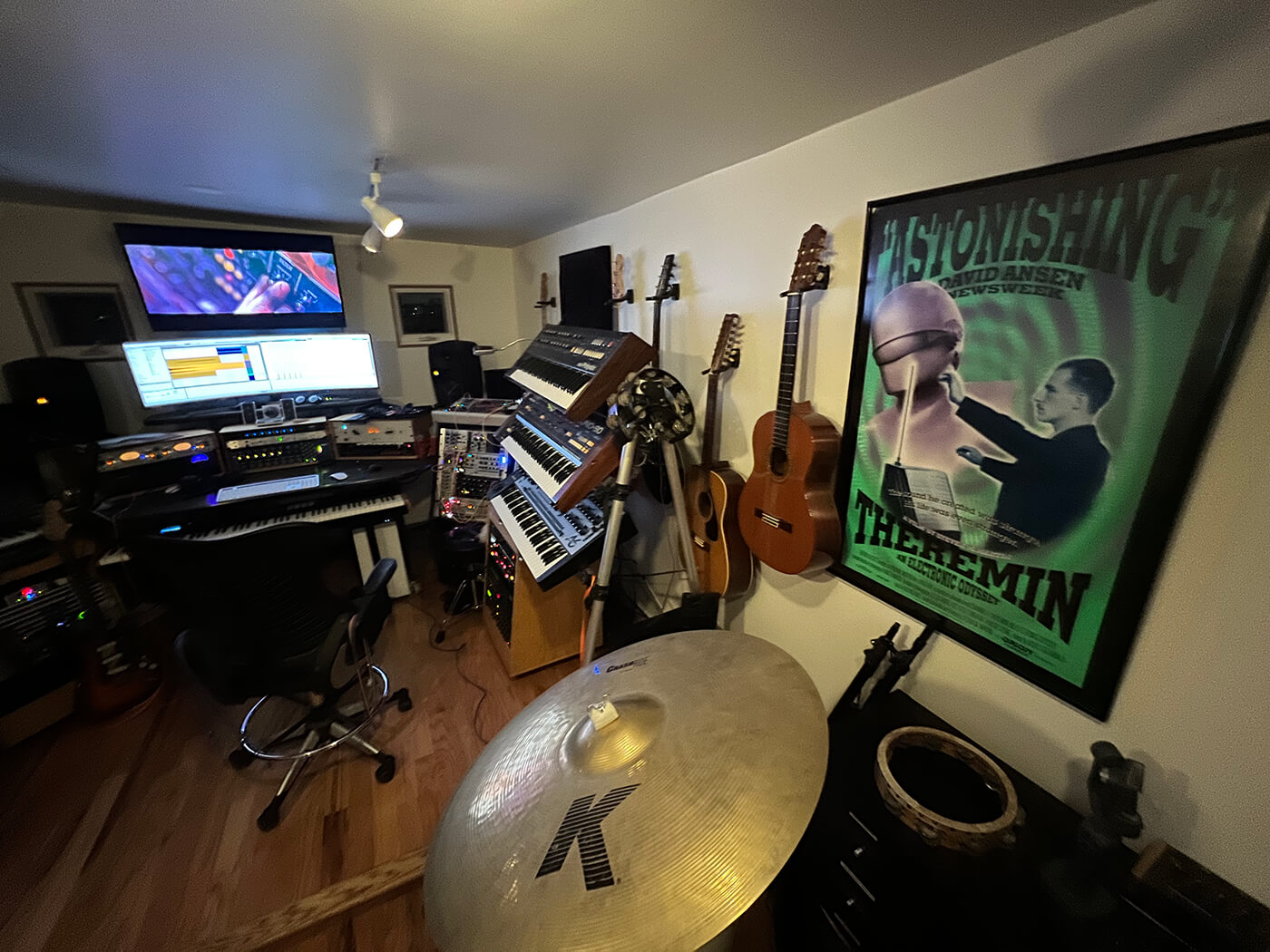 How did you first get into synthesis?

In middle and high school, I had a Yamaha W7 that I did a ton of work on. It was a workstation synth Yamaha had and I loved it. It’s totally cheesy and gross-sounding now but I learned a great deal from it. I was mostly in the box until getting the Juno-60, and that gave me my first solid grounding in analog subtractive synthesis. I studied synthesis in college and used Max software to create some simple synths on my own, but the Juno had the sound I was looking for, so that’s when I got heavily into analogue.

What synth or effect can be heard the most on your new release?

The Ensoniq DP/4 multi-effects processor is what you’ll hear the most, even though you might not know it. I ran basically everything through that unit because I love the flangers and phasers in it. If you pay attention, you can hear it a ton.

Director is a cinematic body of work but does not soundtrack any existing picture. Is there anything about movie soundtracks you’re particularly drawn to?

Soundtracks crystalise very emotional moments that people connect to, and that’s why I like them. I love storytelling and the art of crafting a good narrative and, in film, that is greatly enhanced by the music that sets out the emotional underpinning of whatever you’re watching. I have always loved the music of some of my favorite films since I was young, like Tangerine Dream’s score to Legend or John Carpenter’s score for Christine. I also love film-making and worked as an editor, so I believe both music and picture just come naturally to me. 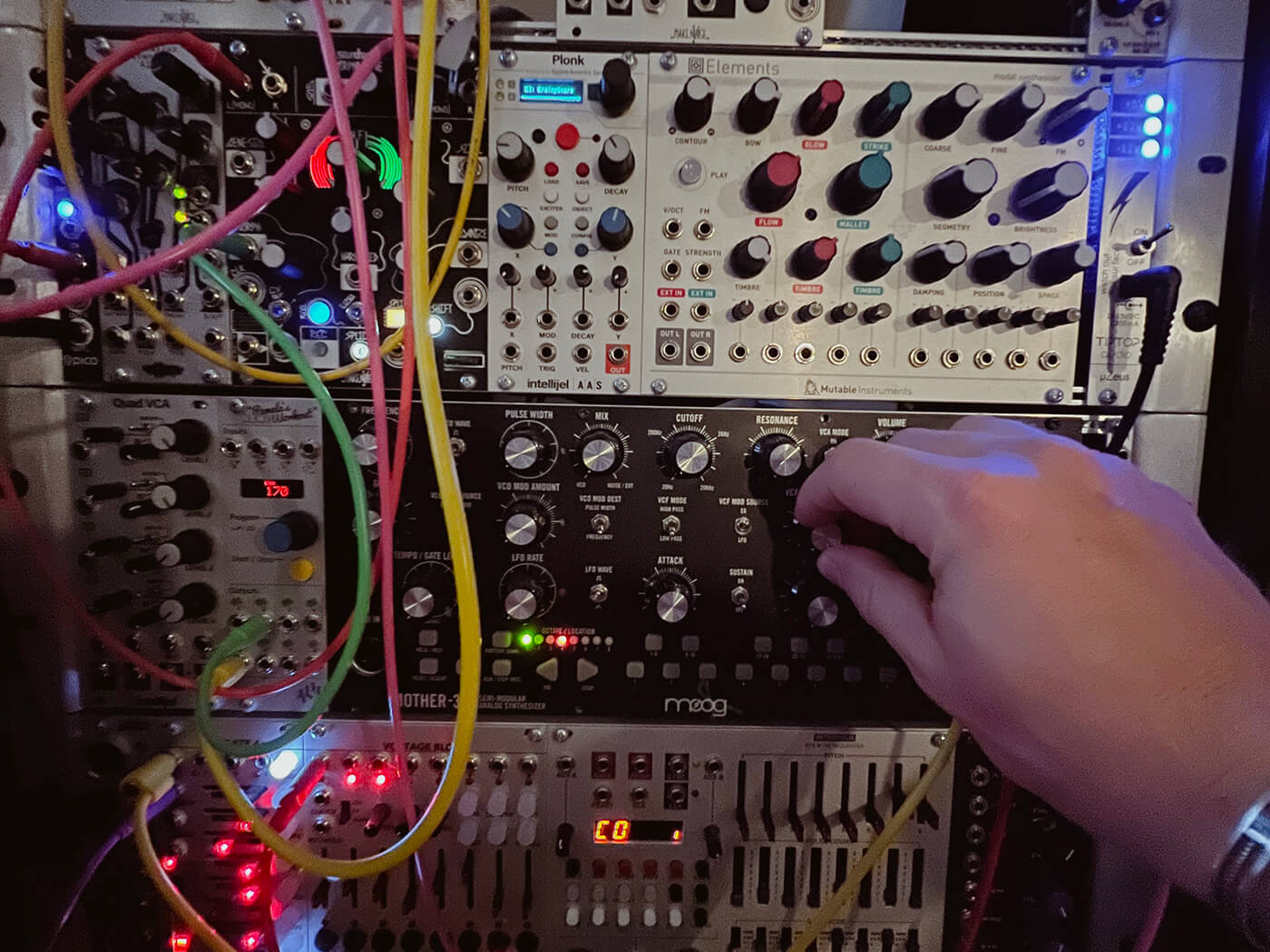 How do you approach working on music for the screen? Any other upcoming soundtracks we can get excited about?

I usually spend time with the director or editor ‘spotting’ where the music is going to go and what type of music is going to be there. I try to recognise the emotional narrative being created and then apply that to the music so that it supports it. It takes some experience, some trial and error and experimentation to figure out what works, but I think the quicker you can find an inspirational sound, motive, chord progression or rhythm and then start building, you can kind of see what works and what doesn’t. ‘t. Then it’s about timing and hitting the right “beat” – not musical beats, but the beats of the scene – so that it gives the visual elements power but also space. It’s a real dance, and to be honest it took me quite a while to understand how the music I like to make can best fit what I’m writing for.

Last year I co-wrote the score to a documentary called Broken Wings with my friend Jordan Chini who is a multi-instrumental wizard. The music is a mixture of Appalachian and chamber instrumentation and I’m thrilled about it. I also love the movie which will be out on PBS later this year.

I’ve had lots of flights of fancy – the Yamaha CS-80 for example. But if I was shooting for the moon then I’d probably want something like an original Moog System 55. There’s just nothing like it, both from a sonic and a collector’s standpoint. After my next record goes platinum that’s what I’ll get! 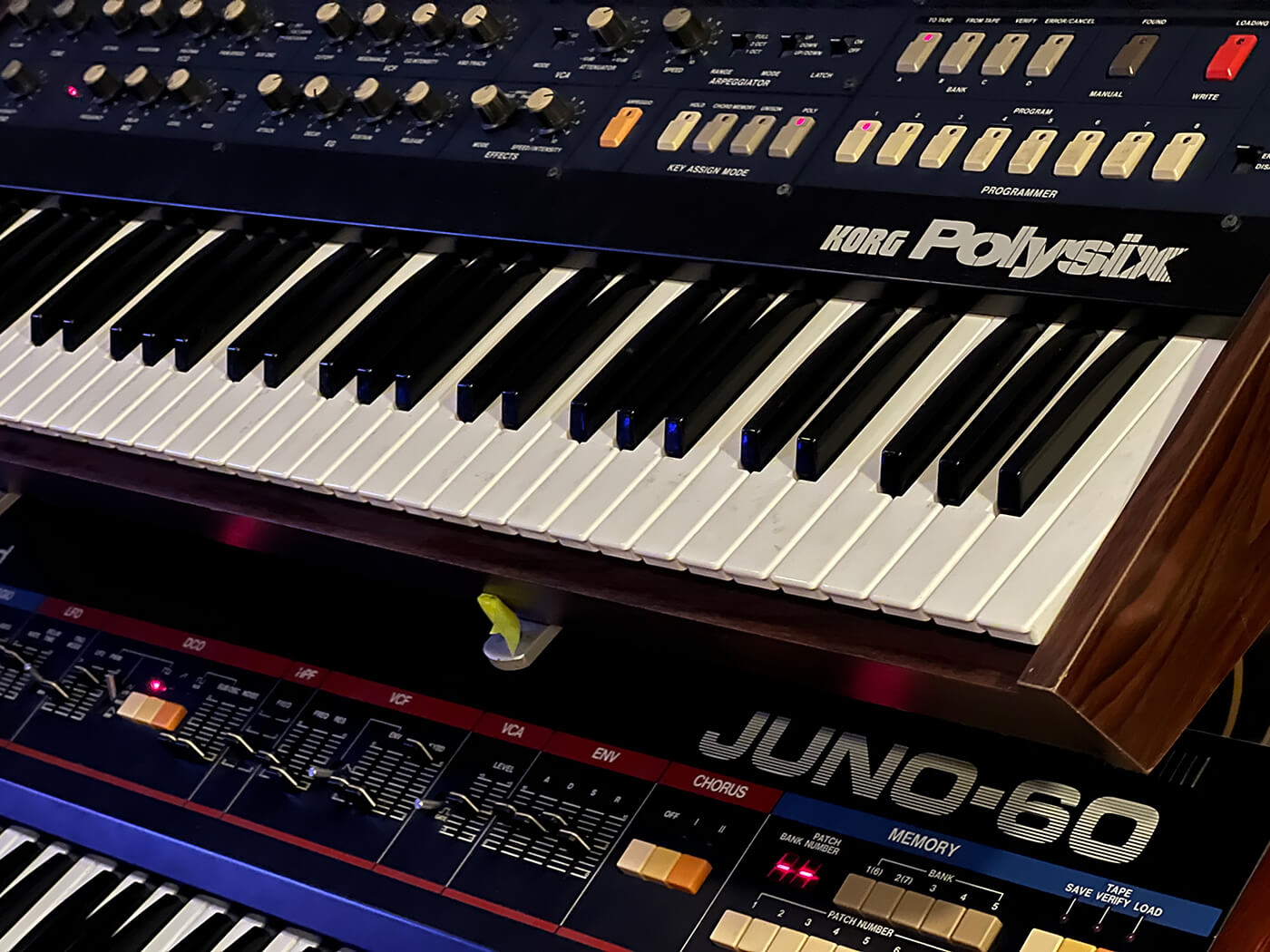 I’d take my Juno-60. It was the original analogue synth that started it for me, and I still go to it every time I need something awesome. It has the perfect combination of playability and interesting sounds.

If you take a dive into the actual physics of sound – how sound travels and how we perceive sound – it really helps with understanding the principles of good mixing, and by extension good composition.

Sometimes, when I’m working on something and it just isn’t sounding right, I think about whether I have frequencies that might be competing with each other and that might be phasing or creating a lot of energy in a mix. When you’re looking for the reason something just isn’t hitting the way you want it to, the best move you can make might be to take stuff away, not to add.

I’m very much a maximalist when it comes to composing and this is one thing I always remind myself: the space around your notes and sounds are just as important as the notes themselves. So leave room! 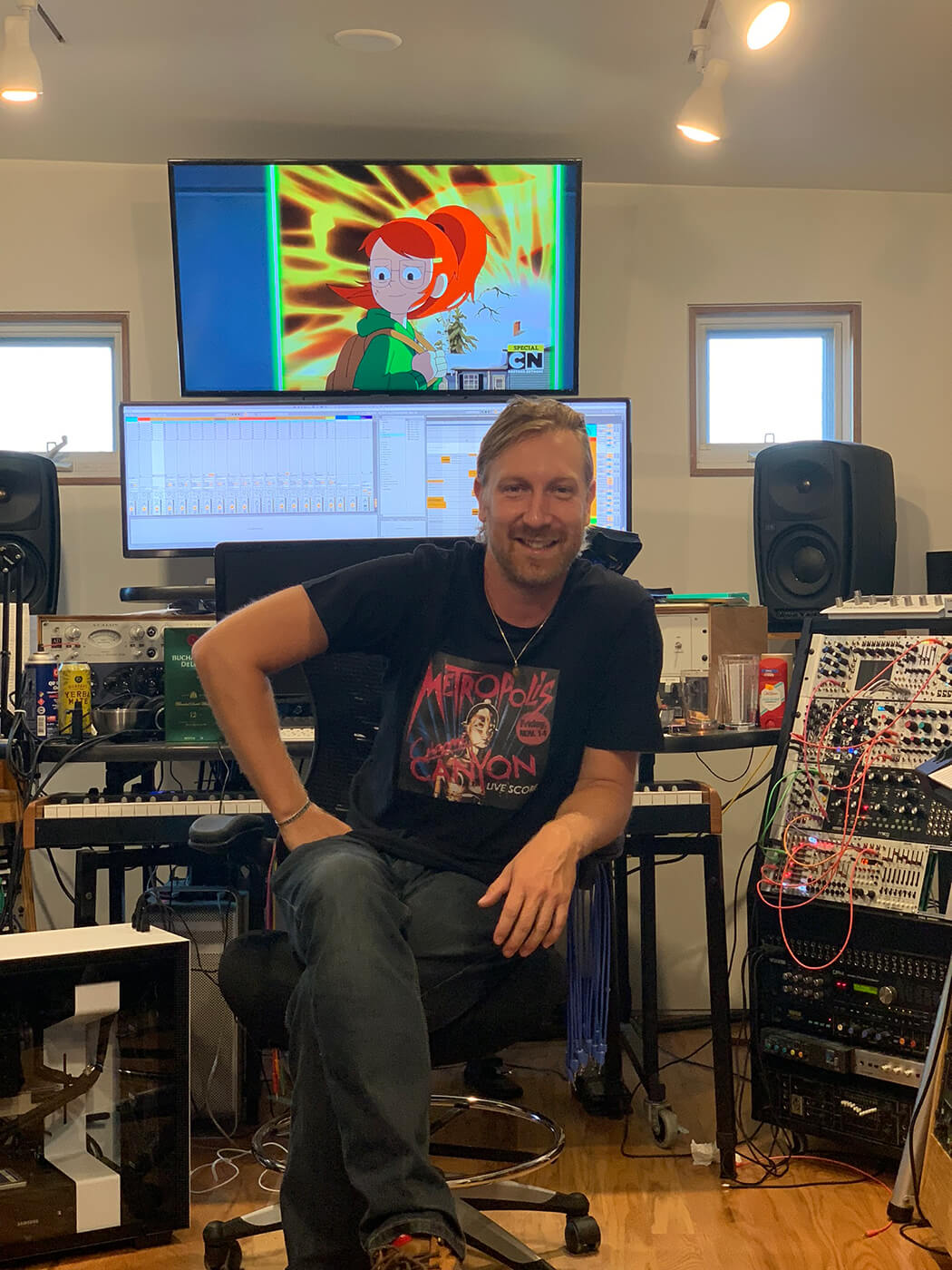 Keep in mind that if you buy something cheap, it’s likely going to lose value and you’ll end up wanting better stuff anyway in the future. However, some gear will hold, and may even increase, its value. All of my synths are worth more now than when I bought them. I used to struggle with plug-in synths to get a sound I loved, and when I got the Juno and the PE-1000 I would literally turn them on, try a couple things and have a sound that I had been wanting for ages. It was so worth the expense. And if I go to sell them – which I never will – I’ll actually turn a profit.

I’ve bought a ton of cheap gear and still do if I’m setting up something temporary or if I’m traveling. But a lot of people don’t think about that when they’re starting out and they make some sacrifices to get more gear instead of focusing on getting one high quality piece at a time.

I’m glad I have some of the stuff I do now because, even if you have to sell some gear down the road, investing in good gear is a win-win because you’ll most likely get back the money you put into it . It’s also going to make the quality of your stuff that much better as well.

It’s that, and to make sure you watch all of Tad Donley’s tutorials on YouTube!