British producer Fort Romeau returns to the long-play format seven years after his 2015 album, Inside on Ghostly International. His latest album Beings of Light, released on 11 February 2022, is his second on Ghostly and sees him blend textural ambient works with heavy house hitters. Fort Romeau’s approach to sound design was different this time around. Using Steven Arnold’s 1984 photograph Power of Grace as his muse, he created over a dozen hours of sounds and asked himself, “Does the music move me? Is it honest?”

READ MORE: Loz Goddard: “I used to set myself deadlines for EPs but now I just make music when I’m inspired. There’s no pressure”

The result is an eight-track journey through dream-like, mesmerizing sound that is a love letter to dance music. We head to his humble bedroom studio to learn more about his inspiration for the album, how he shifts his workflow in the face of an album, and how he used a combination of hardware and software to create layers of intricacy.

Hey Fort Romeau! Congrats on Beings Of Light. You were heavily inspired by a particular Steven Arnold photograph for this one…

I like using images as a starting point for making music. I struggle to use other music as a starting point, as there’s always too direct a reference point. With pictures, I can get ideas about sound palettes or moods but, as it’s an abstract interpretation, there’s no right or wrong way to do it. If I’m comparing a track I’m making to another musician’s, I’ll end up worrying about how the snare drum sounds or that it doesn’t have a strong enough kick drum instead of concentrating on the more important issue of feeling.

There are some interesting changes in pace throughout the tracklist. How does your process for these pieces differ from your dance-focused tracks?

It’s important for me to explore different sides of the electronic process. Club sound systems and audiences have certain demands and expectations about how the music should be mixed. This is interesting and has its own challenges but, with an LP, I want to express a broader sound and bring in different points of reference. Generally, these pieces are more freeform and generative in their creation than the more meticulously organised club tracks.

We’ve found Spotlights irresistible. How did you create this multi-layered piece?

Most of the sounds are from the Buchla Sound Easel, and then warped and moved around in audio. I wanted the track to have some points of contrast from the direct and regimented sound of the bass and kick, so it has these breaks where the time just seems to break down. There’s also some flugelhorn and trumpet going on in the mix for good measure.

Can you tell us a bit about your studio?

Since COVID-19 hit, I moved out of a bigger studio space and back into my bedroom. So the setup is compact and pretty modest. I’m not a gear collector – I’ve owned a few fancy polysynths and classic samples but I will use something for a while then move on. With limited space, any piece of hardware has to earn its keep. 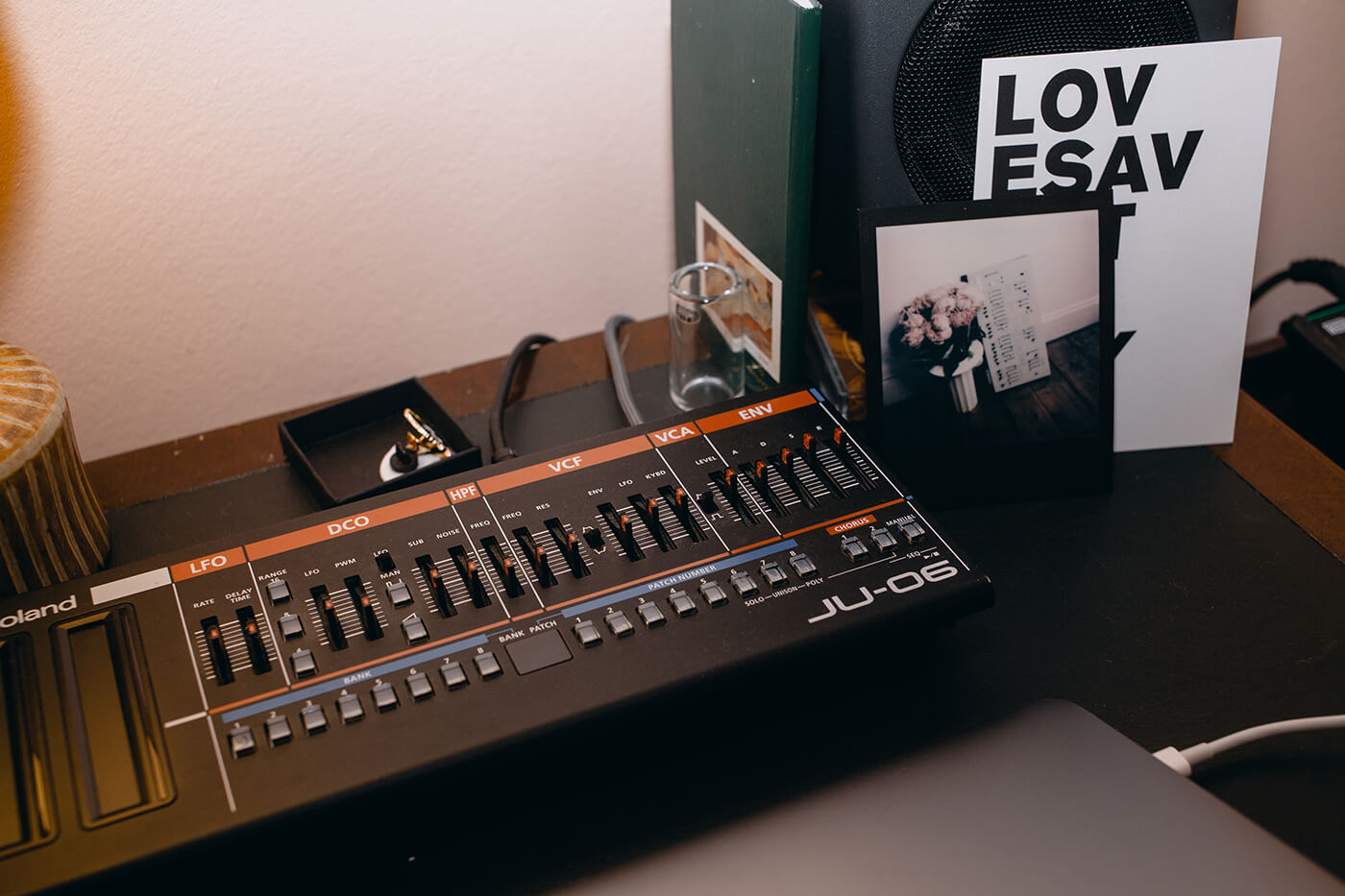 How has the studio environment allowed your album-writing process to flourish? Do you try to create a specific atmosphere when working in the space?

Such a small intimate setup comes with its advantages and disadvantages. The main advantage is I can work quickly and at any time of day or night – it’s very convenient. The main downside for me is the monitoring environment. Realistically, in a domestic location, you have to rely on headphones for 99 per cent of the work, which can be a real challenge. The Neumann headphones are the best I’ve tried for giving you something approaching a flat clear presentation, but it’s not the same as a properly calibrated speaker set up clearly.

I also have some Grado hi-fi cans that are a dream to listen to but a nightmare to mix on, so they are more of a secondary point of reference. To be honest, the older I get and the more experienced I am with making music, I realise that good ideas are what counts and having a great space with all the fancy gear is a luxury and not a necessity. 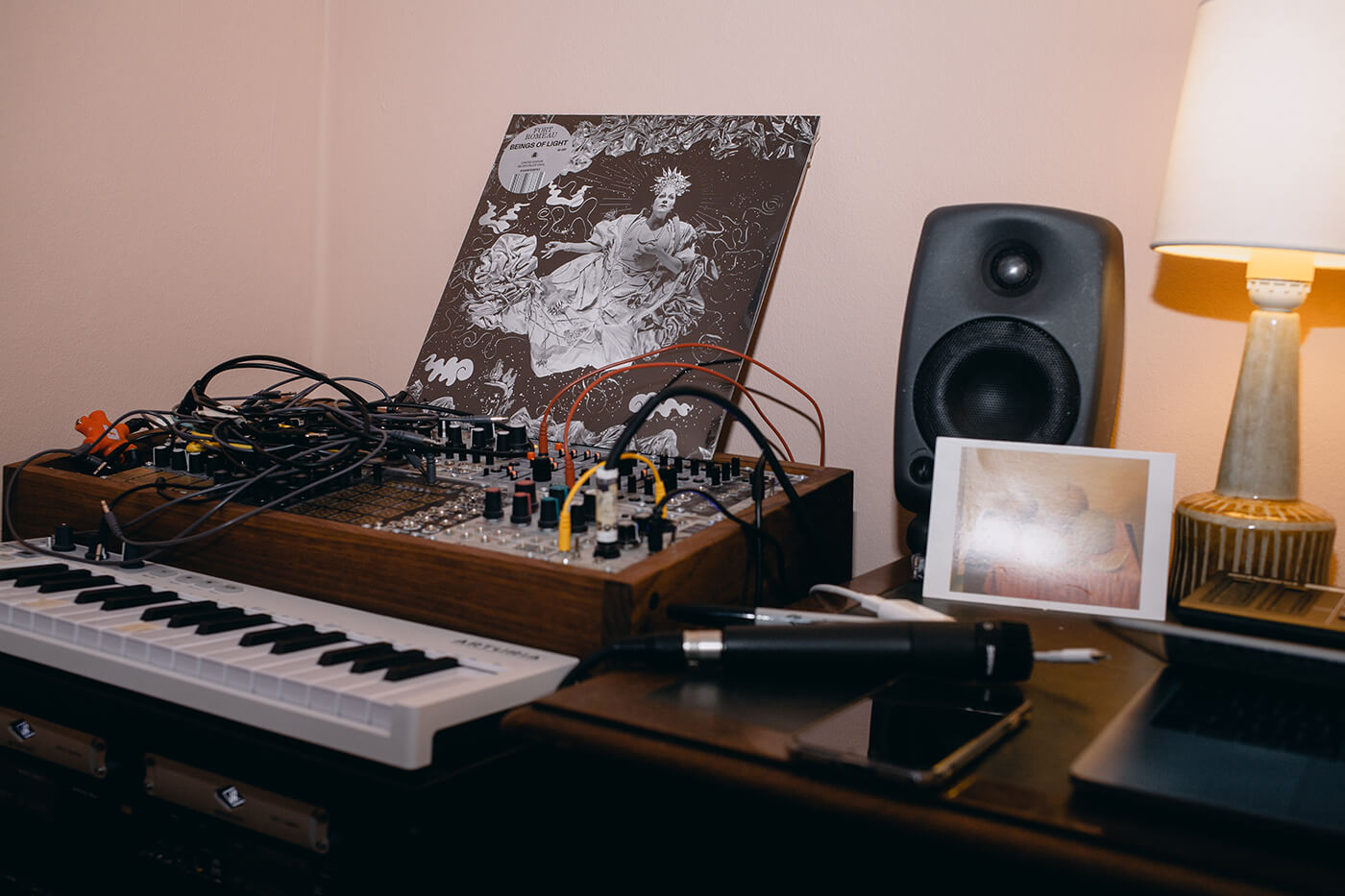 Which DAW do you use and why?

I use Ableton Live, principally because it’s what I know. I’ve been using it since 2005 and I’ve developed such fluency with it now that I’d need an extremely compelling reason to migrate to a different DAW. I also think it depends on what you’re using the DAW for. I have friends whose workflow is 90 per cent tracking and 10 per cent editing so Pro Tools makes sense for them. I do a lot of audio editing and building songs directly with samples inside the DAW so an environment like Live just makes the most sense for me.

It would have to be the Moog Minitaur. It’s a simple little unit but it sounds great – I’ve always been a fan of that big, juicy Moog low-end. I would like to get a well-restored early Minimoog. For me, it’s the holy grail of synthesis and versatile enough to earn its keep. But I think that will have to wait until I move out of the bedroom! 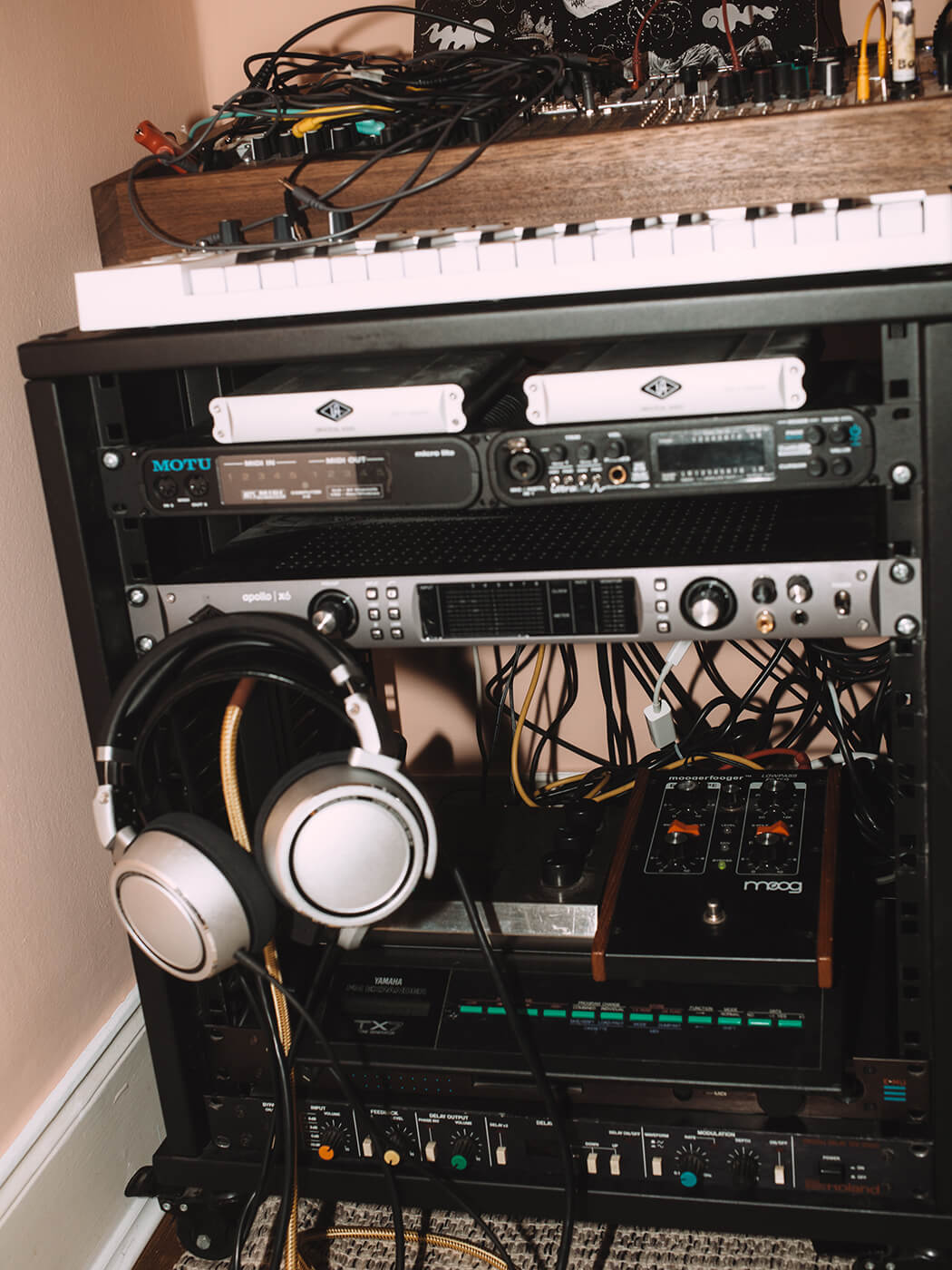 Is there a particular synth or effect that can be heard a lot throughout Beings of Light?

Moog Minitaur, Roland TR-8 for the drums, particularly the hats, and Pultec EQ on everything – it makes everything sound better. I used the Juno 106 plug-in a lot, which sounds very similar to the hardware. I also use a lot of the Echoplex tape delay, the Binson Echorec by Pulsar and Valhalla DSP plug-ins on the drums to mangle them and get strange textures.

You amassed over a dozen hours of audio when creating the album. Has your approach to sound design changed since exploring sonics for this album?

I like to create a lot of sketches, and usually, if a track isn’t clicking in around two hours, it’s just not going to work. So there were many half-finished demos with one good sound or idea that just didn’t make the cut. These days I’m more interested in saying the most with the least amount of information possible. To paraphrase Einstein – a great idea is as simple as possible, but no simpler! 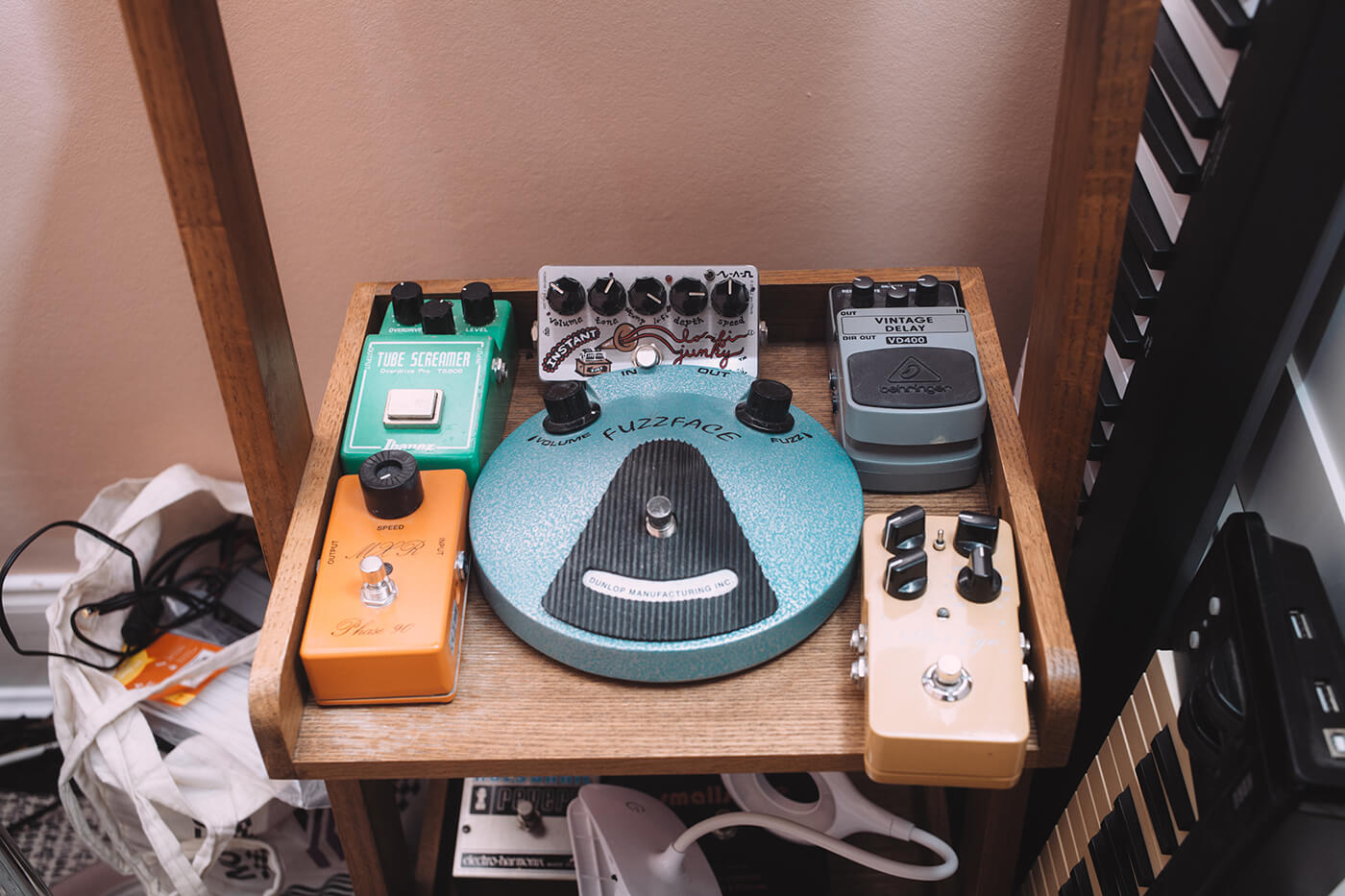 The UAD hardware and software. If you add it all up it gets a little scary how much money it represents. But on the flip side, it’s a tiny fraction of the cost of even the electricity bill of running a full format vintage console or having 12 Pultecs. Not to mention the footprint is smaller!

What is next on your shopping list studio-wise and why?

Theres a few Eurorack things i have my eye one, the Squid Salample from ALM and basically anything from Analog Systems and Verbos. i flip flop from one extreme to the other when it comes to modular. One day i think its the best and the next its just a time and money sink! The truth is probably towards the latter but if you are very intentional with what you want a system to do then i think you can create something really unique and very difficult to achieve in computer world. So for me its all about sampling and mangling sound sources, i have the Phonogene which i really like for getting a lofi sampler sound that really just sounds leagues above the plug-in bitcrushers. You would have thought digital sound degradation would have been child’s play in the software world, but it seems not! 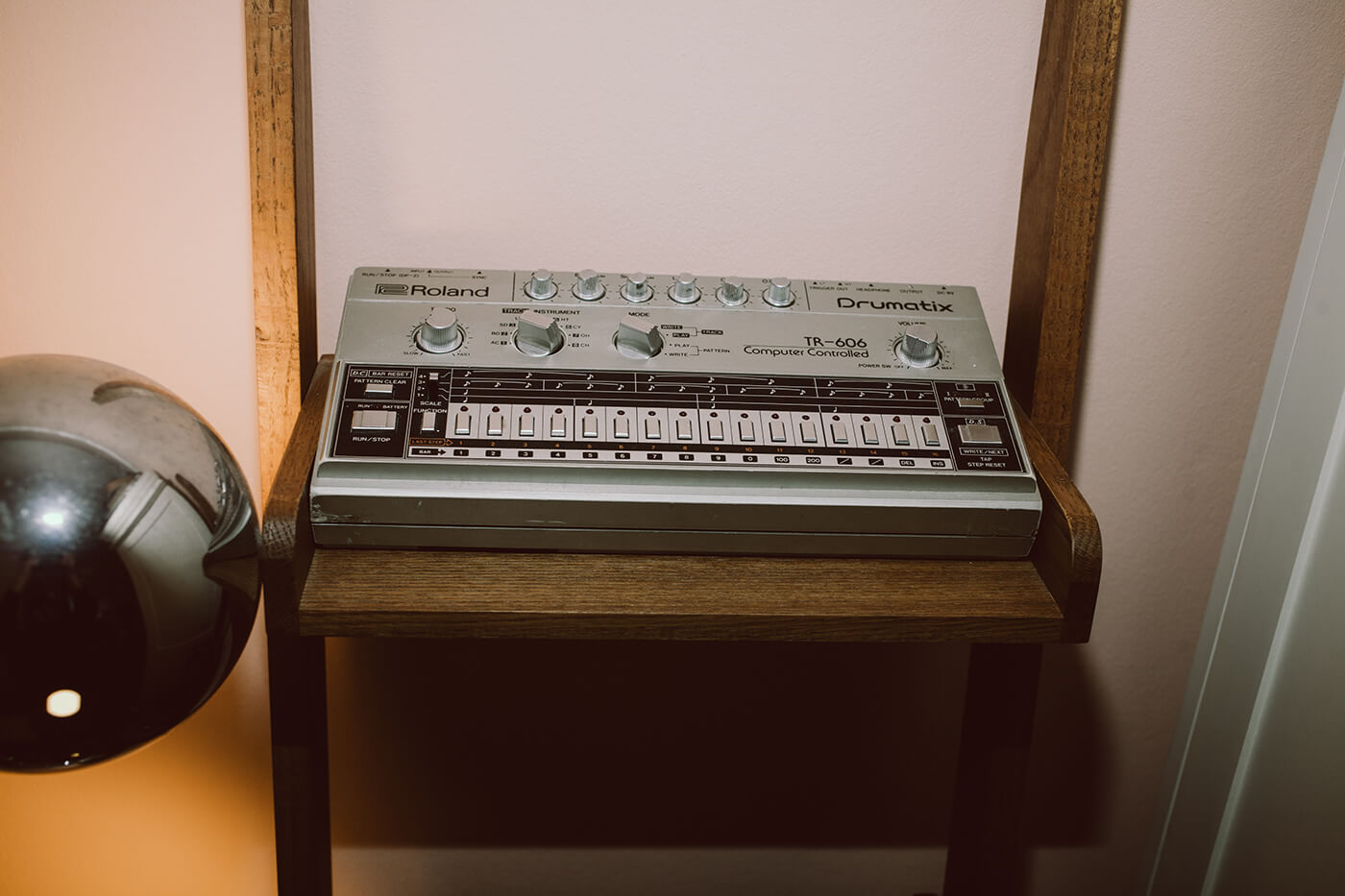 If we left you on a desert island, what one item would you take with you to make music with forever?

Probably an Octatrack (and a very large portable battery pack?) I don’t have one but I figure I would have enough time to learn how to use it. 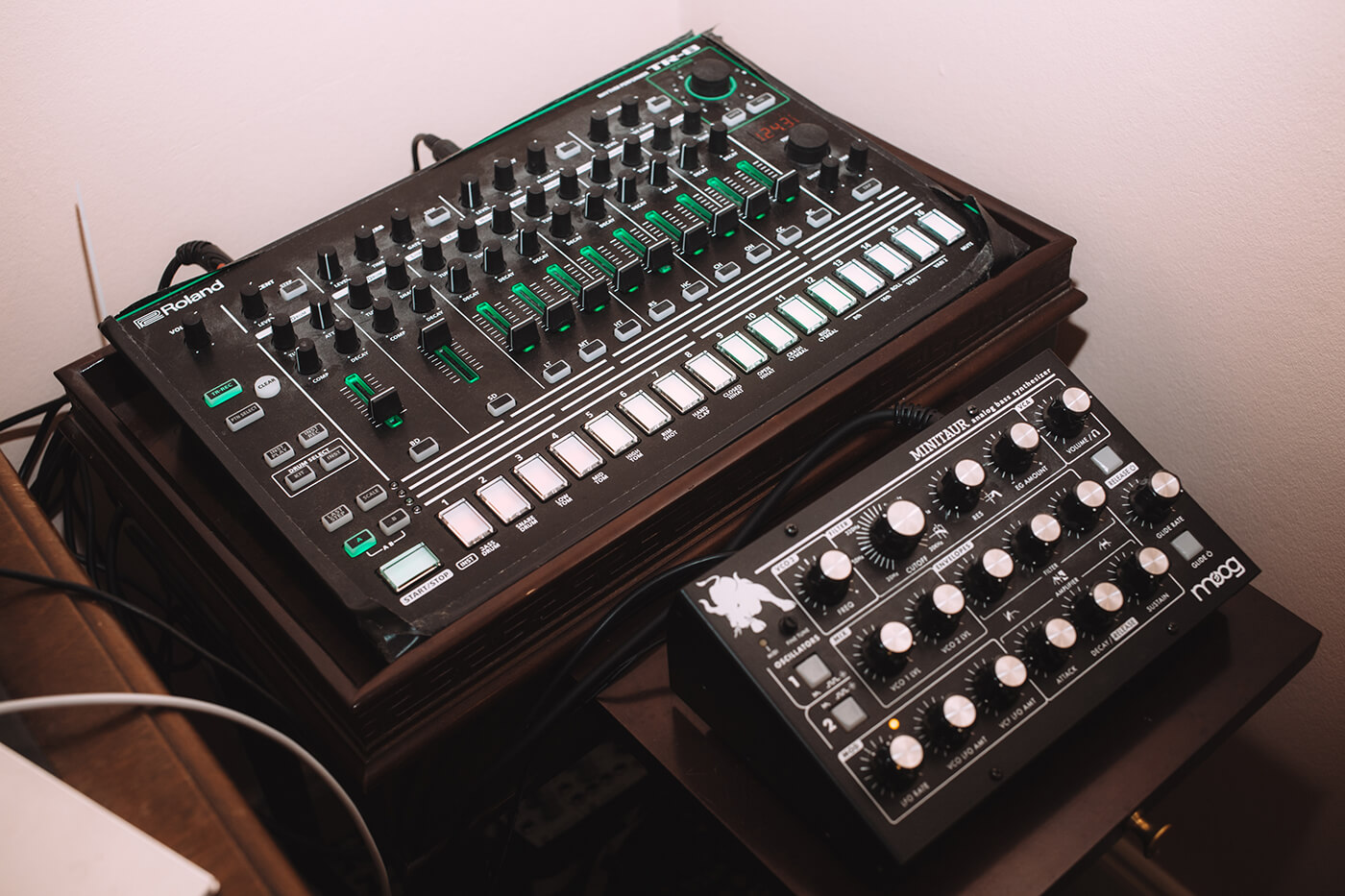 In electronic music, the most important thing is to try and find a way to make something sound unique. We all have access to the same tools and the history of recorded music to sample from, so it can be easy for things to become homogeneous. For me, it’s always about trying to find your own voice and style that draws from others but (hopefully) isn’t a derivative or a pastiche. 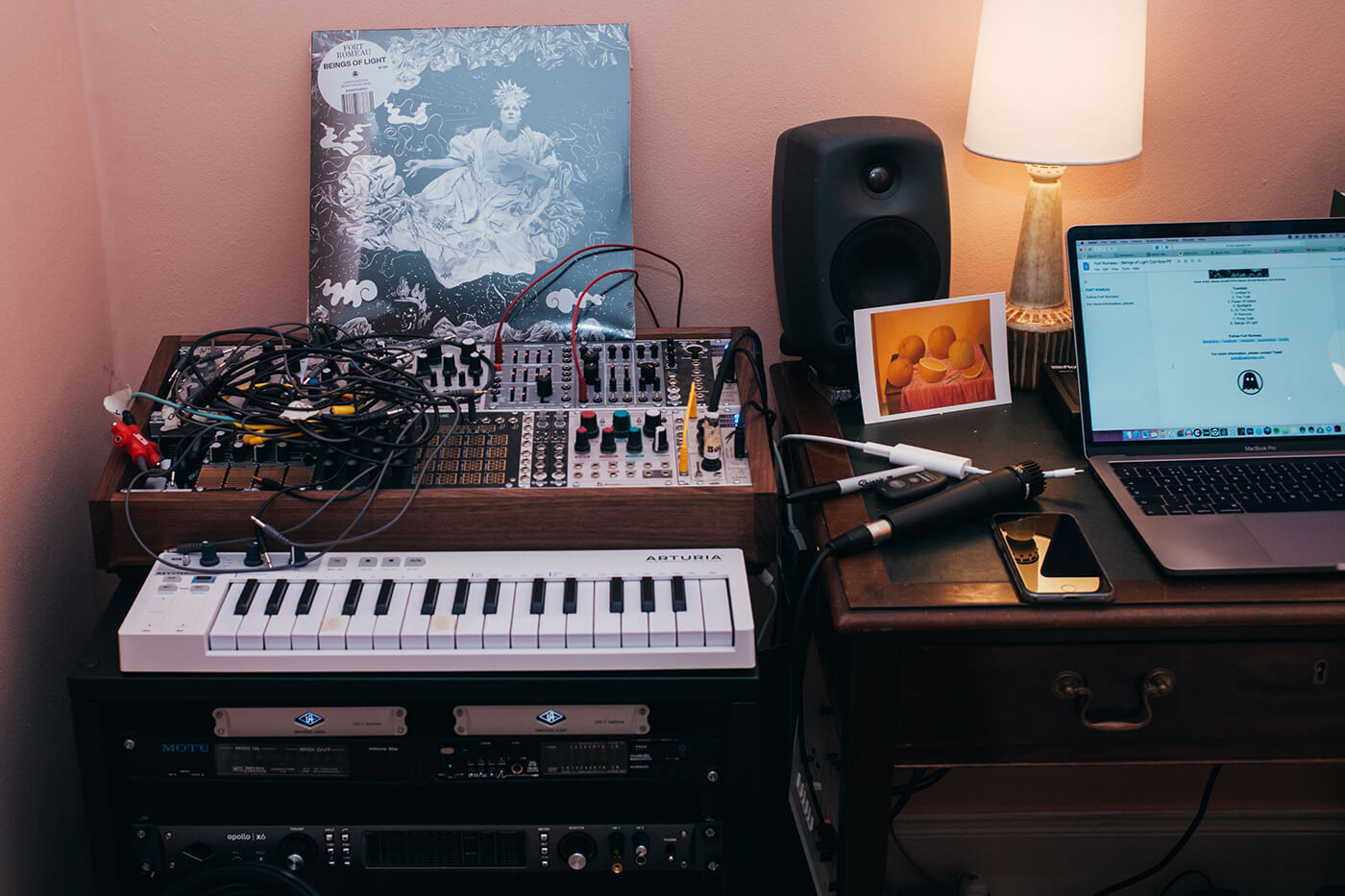 As with your previous albums, this one is out on Ghostly. What’s kept you working with this label, and what should other look out for when signing to a artists label?

Ghostly releases a wide variety of musical styles. With some labels, the music is similar and you sort of know what you’re going to get before you listen to the record. But with Ghostly, it could be a techno record, indie, hip-hop whatever, so in that sense, there are no preconceived ideas about a ‘Ghostly sound’. It’s more an approach to curation, which in some ways echos an art gallery’s approach as much as a record label.

Start small. There are so many great pieces of hardware available now that are quite cheap, and when I started there were almost no small affordable synths on the market. Now you have so many choices! Pick one thing and explore it, and if it doesn’t work for you then sell it and move on. Don’t fall down the rabbit hole of more and more gear. GAS is bad for your health!