Kai’s latest album, Shapeshifter was released in two parts, Shape and later Shifter. Each part reflects the artist’s moods, transitioning from the intimate, tranquil acoustic moment of opening track Golden to electronic sounds in tracks such as Crystal Firefocusing on the mission of the making the listener dance or move in some way.

Speaking from his Oslo studio, we find out about the making of the album, while talking through the space’s many intriguing pieces of hardware.

Hey, Kai! How does it feel to share Shapeshifter and what was the thinking behind the Shape and Shifter concept?

Hey! It feels good – I tend to let stuff go and don’t think so much about it after I have released it. It’s allowed to live a life of its own, you know?

The thought behind Shapeshifter was to make an album based on how Theodor Kittelsen’s paintings of the mysterious and slightly evil but captivating Nøkken made me feel.

How does the sound on Shapeshifter differ from previous releases?

Shape was recorded as a band with everybody playing in the same room, which makes it sound a lot different than previous releases. There are live drums on it which I’ve never had before. I wanted my bandmates and collaborators to be more involved and free to do what they wanted on this record, which I think shines through.

Tell us a bit about the studio

The studio is located in central Oslo, Norway, near a place called Alexander Kielland’s Plass. It’s on the third floor of a big office building and is like a dungeon with four rooms and no windows.

I share it with Knut Sævik, who mixed Shapeshifter, and Pål Ulvik Rokseth, who is my long time collaborator and one of my best friends – he plays keys in my band. I have rented this place for five years.

It is a control/mixing room, a B studio, a vocal booth and a live recording room. I’m currently located in the recording room with my setup on a desk in the corner.

I mainly record here and edit audio at home later. We have a bunch of synths, a drum kit, guitars, basses, a piano, drum machines, guitar pedals and outboard gear that we share so it’s nice to come down and just record and print a lot.

I have a Sequential Cirklon sequencer that I sequence my synths with. I usually do long passes of improvisation in the studio either on my guitar, singing or playing keys. 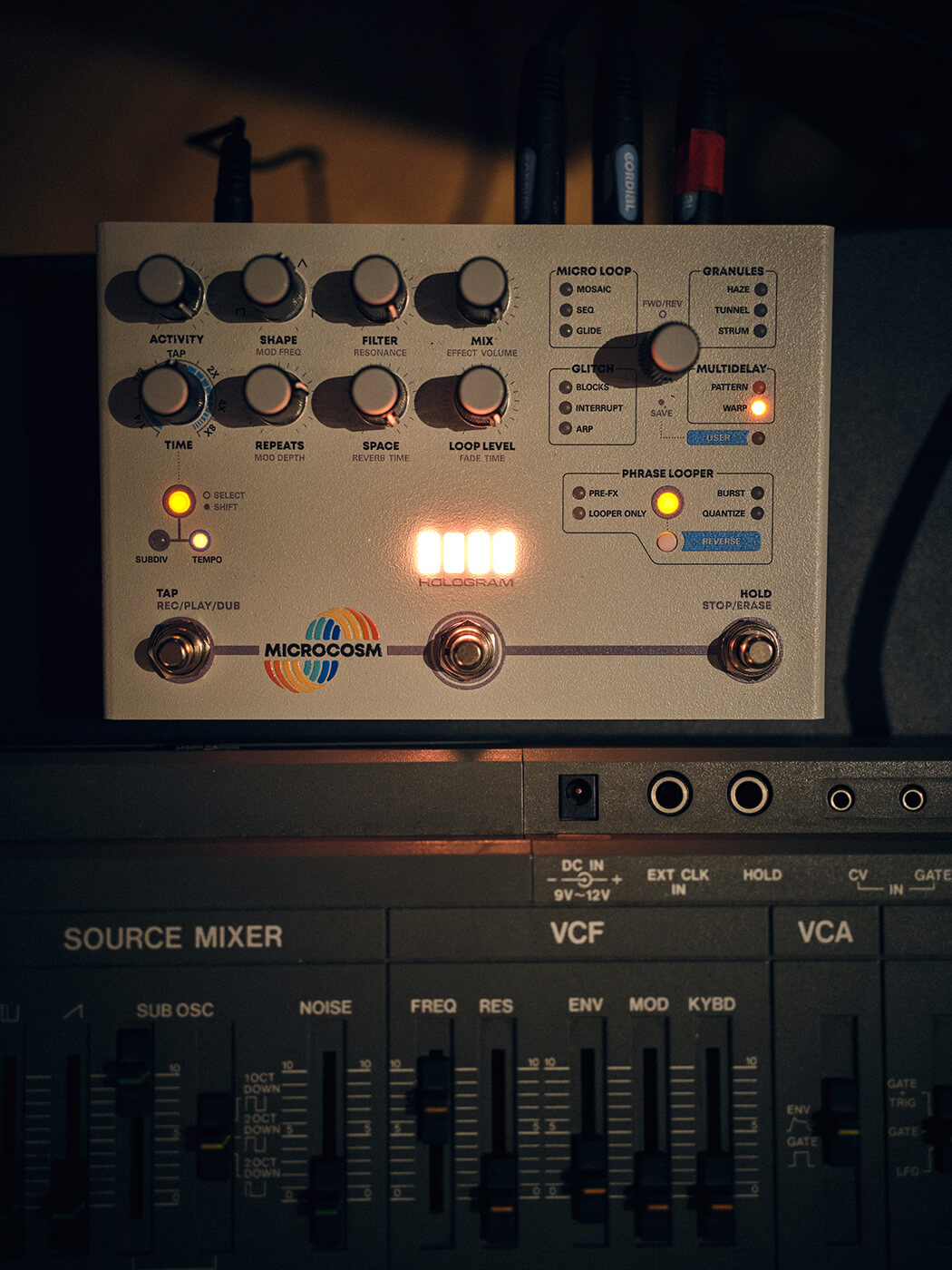 What atmosphere do you try and create in the studio and how does it help you with your creativity?

It depends. When I’m by myself I usually put some Studio Ghibli movies without the sound on a screen and just go with the flow. When I work with collaborators or record with my band, the most important thing is creating a space where people can experiment without feeling like they are being judged.

I use Logic Pro because it’s what I started with. I can navigate myself within Ableton Live also and have used it for quick ideas but I’m most comfortable in Logic. 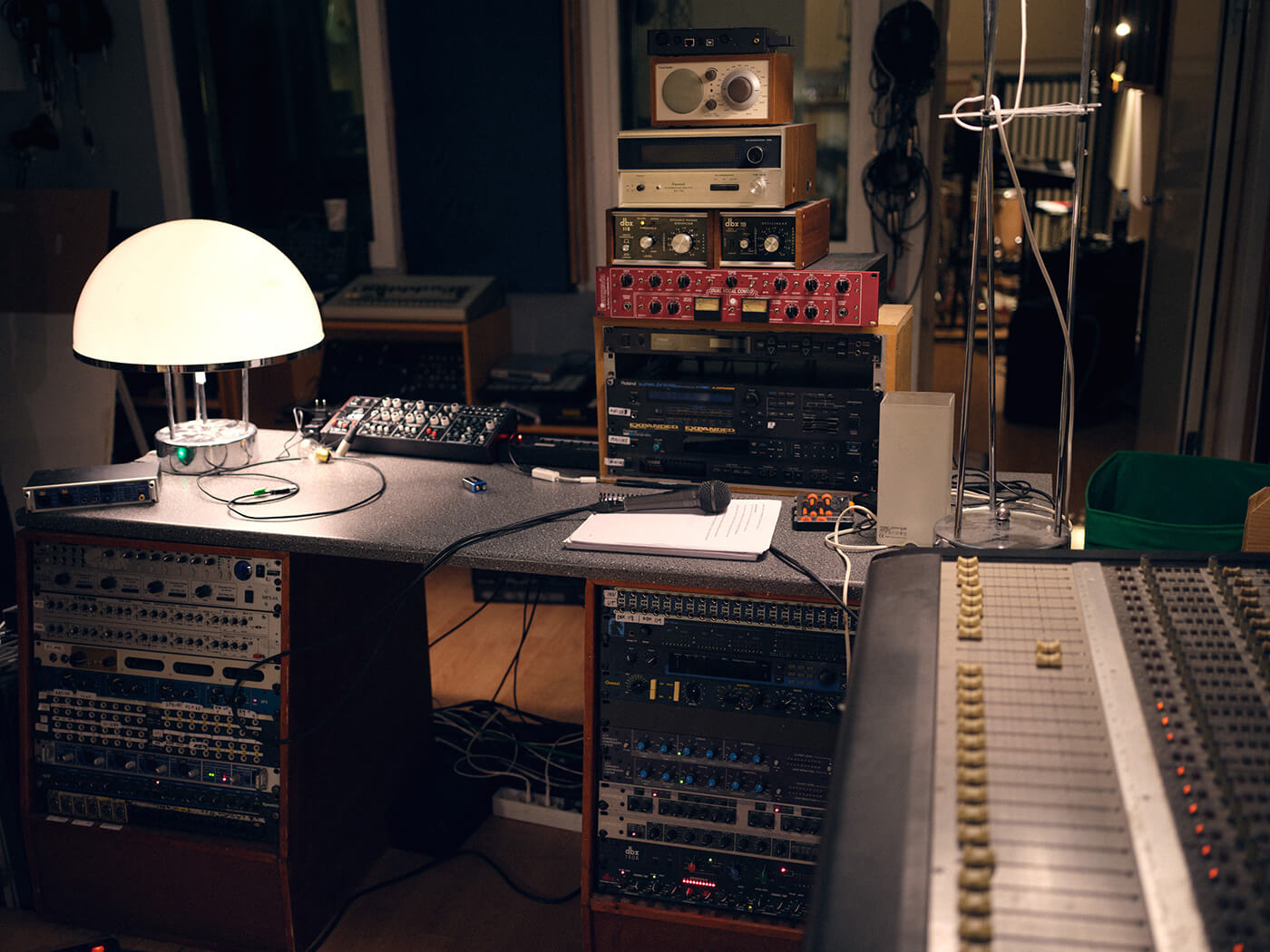 Oh, that’s tricky. It might be my Elektron Machinedrum. I like being able to create with one piece of gear and I always bring it along with me on family vacations. In one way, it is very limited but, at the same time, it’s super-deep with endless possibilities.

Or my vintage Guild M-20 guitar that I bought about I year ago. I have it at home and play it daily. It sounds so good.

What synth or effect can be heard the most on Shapeshifter? Was there one that was used on the Shape side more so than in Shifter, or vice versa?

The Elektron Machinedrum is only used on Shifter. Replacing the live drums on Shape with the digital drums of the Machinedrum really shifts the mood of the record. I used the Fairfield Circuitry Shallow Water pedal on my guitar on the Shape side – it’s a chorus-style modulation effect with a low pass gate that lets you dial in a slower attack. It makes it sound like the guitar is being run through a lake. 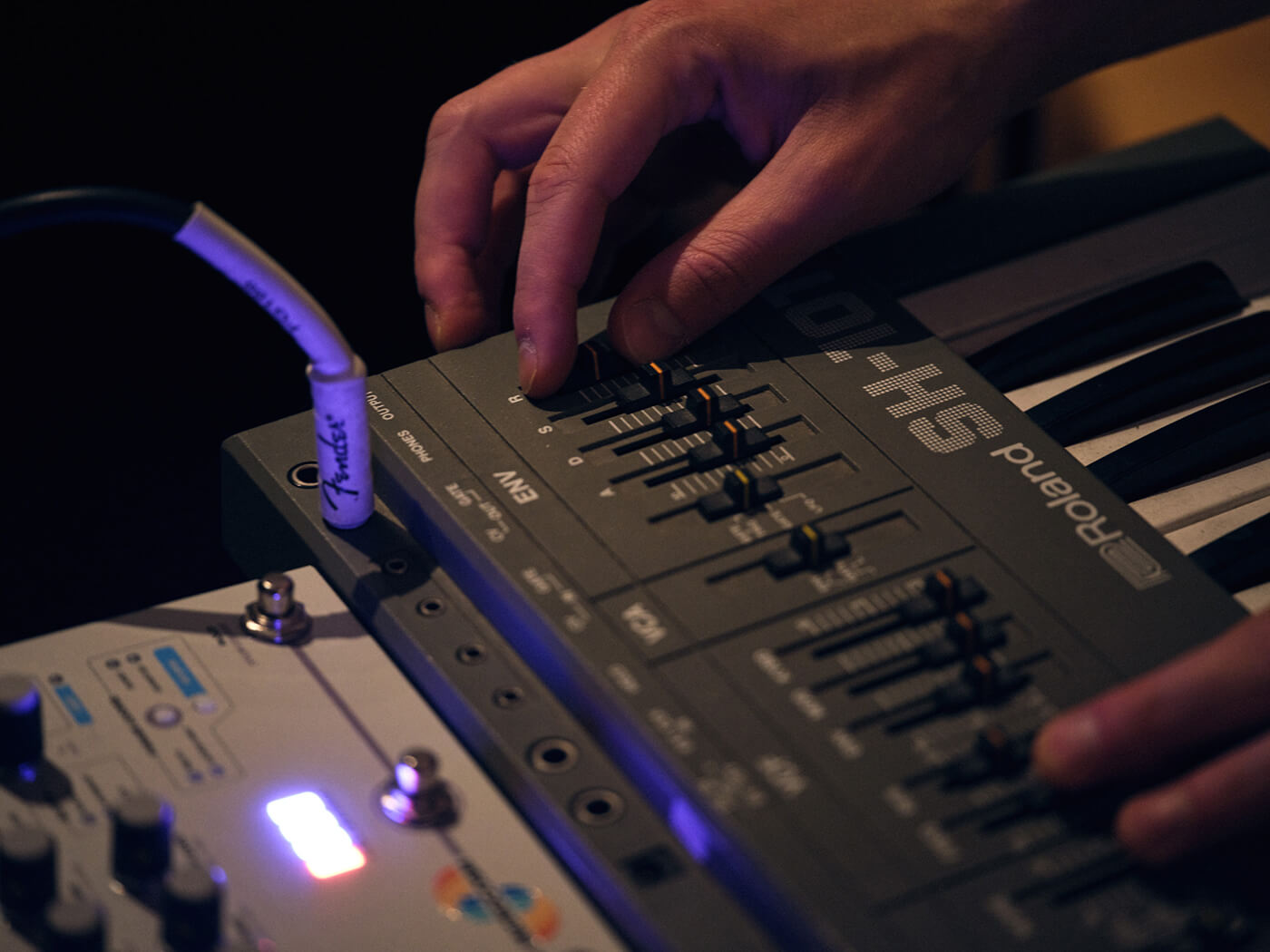 Let’s talk about your guitars. How do you achieve a typical Gundelach sound using your guitars and effects pedals? Please, please tell us about that sweet reverb!

I have two electric guitars. One is a sky blue custom Fender Stratocaster that I got when I was 16. It’s built by Trond Tufte who used to have a shop called Guitar Workshop in Bekkestua, right outside of Oslo. I grew up in that shop. I’ve played with it live for many years and it always delivers.

Since I only had one, I felt that I earned another guitar last year. So I ordered a custom Jazzmaster from a company in Nashville called Novo. It has a Silverburst finish and three gold foil pickups and it’s very versatile.

I record guitar through my pedalboard into my Manley Voxbox, often combined with a mic’d up amp. I’ve been borrowing Pål’s vintage Binson tube amp for some time; it has a nice dulled sound. I also use my Fender Vibrolux. I mic them up with a Shure SM57 off-centre.

For reverbs, I have a Strymon Flint on my pedalboard that I enjoy shaping the sound with. I also use an OTO BAM and an old Lexicon PCM 60 for reverb. I love reverb. Valhalla Vintage reverb is great as well.

And now, your angelic vocals. What microphone do you use and how do you process your vocals? On Fruitfor example, there’s an intriguing effect…

I have mostly used Knut’s vintage Neumann U87 but recently, I borrowed a Sony C38B. I always go through the Voxbox first. The vocoder sounding effect on Fruit is made with Little AlterBoy from Soundtoys. 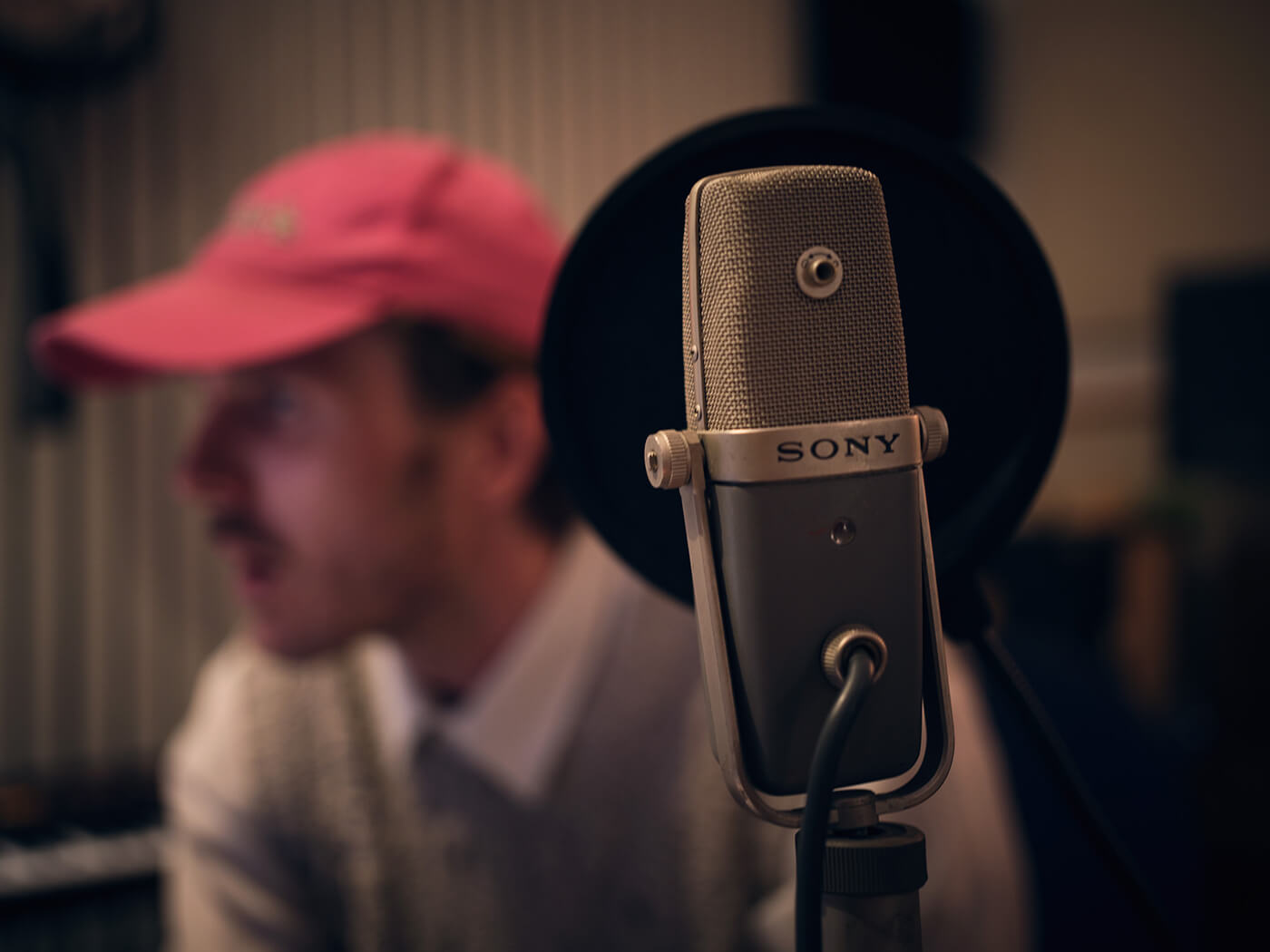 There are occasional uses of ambience/foley samples throughout the album. What do these sounds impart into your music?

Almost all the field recordings I do I record with my iPhone – it sounds alright and I always have it with me. I record a lot of weird stuff on it [laughs]. Adding recordings like that makes the songs feel more alive and I have strong associations with those sounds. Sometimes, I put audio like that quite low in the mix, so it’s almost inaudible. But it does something subconsciously.

What is your dream piece of gear and why?

I really want a Roland RE-501 Chorus Echo. I almost bought one a couple of years ago but didn’t think I needed it. They are so much more expensive now. I want it because it does things that the plug-ins and pedals that emulate it can’t do.

I would bring a Roland TB-303 and make cheeky acid basslines for eternity. 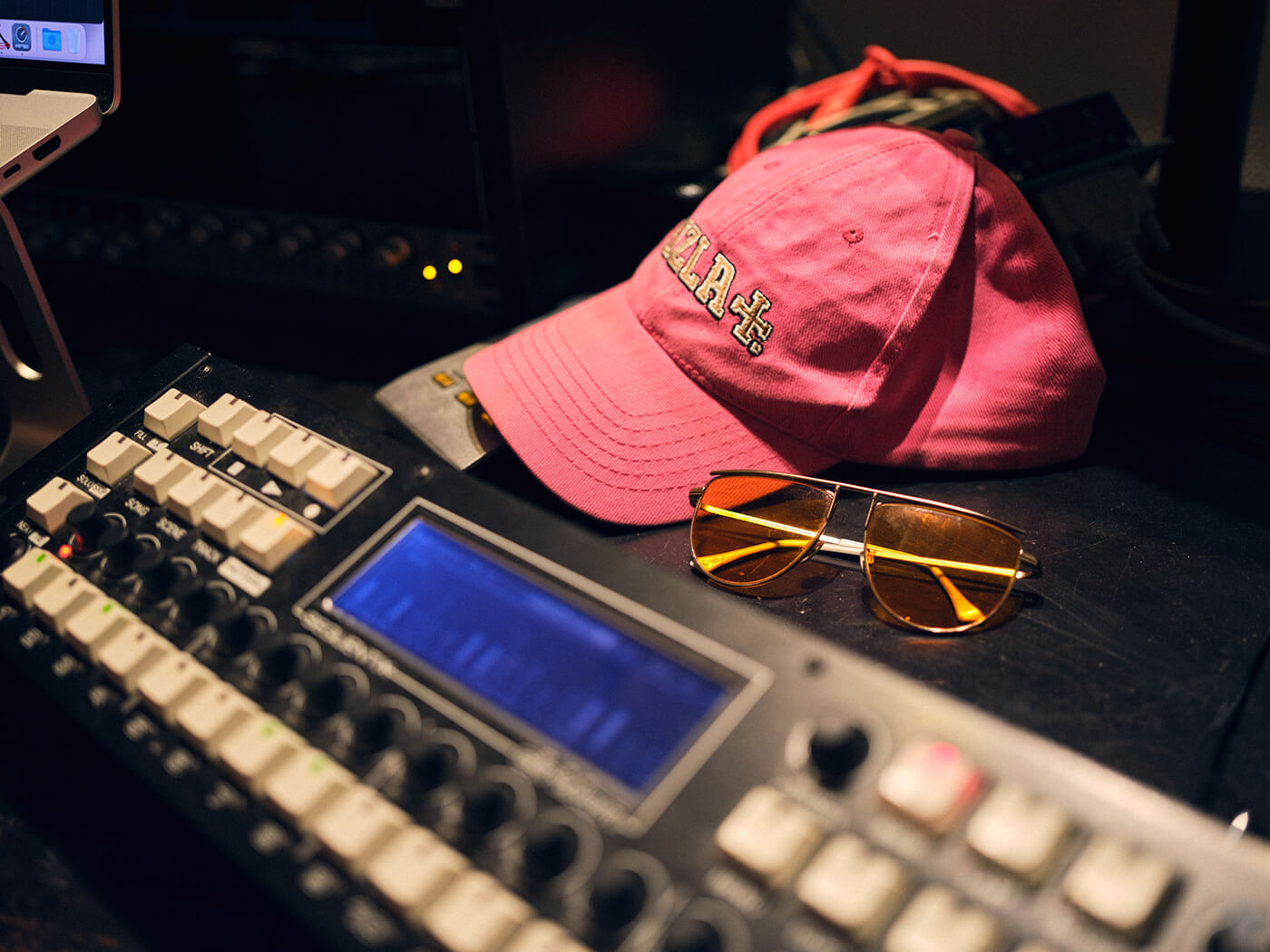 Be selective when watching YouTube tutorials. There are a lot of good methods out there but also some bad ones. It’s confusing when people tell you to use the ‘right’ techniques, as there are often several ways to do those things. Just do your thing and you will get better in time.

Buy quality gear right away instead of buying cheap stuff first, and then figure out if you need better equipment and then buy that.

That being said I made bangers on my KRK Rokit 5’s for years so I guess that’s stupid advice.