Will Lansley and John Morgan, AKA Punctualhave a knack for making party-starting earworms with some of the best names in house music, from Sonny Fodera to TCTS and Jonas Blue.

Trusted by these artists for a reason, the pair have established a song writing process that works, being able to work as a team effectively in their West London studio.

Talking us through their most recent Maze EP, the boys reveal what powers their robust studio operation and intricate sound design techniques, before admitting they wouldn’t be anywhere without the café next door.

Hey, Will and John, your Maze EP is sounding huge! How does it differ to past releases?

This was the first EP where we were totally involved in writing the toplines for each track. In the past, we’ve sampled old acapellas but, since we came out of lockdown and got into our new studio, we’ve been making loads of original music with the new writers we’ve met.

How do you work together in the studio?

Will: John is a wiz on MIDI and chords, and rustles up a few 15-30 second-long song starters before our sessions. We then listen through them with the vocalists and writers we have in on that day and get them to ad-lib for a while until something stands out.

At this point, John starts to flesh out the track into the full arrangement, and then I’ll produces the vocals up. Of course, there is a crossover of roles on different songs but we find that this is the most efficient method for us.

You’ve worked with some huge names. What do you love about collaboration?

The best thing is having new ideas that we wouldn’t have thought of ourselves, mostly in the form of melody or lyrics.

We also enjoy meeting new people and there is a real sense of community in our world of music. We share lots of mutual friends and it’s nice when it doesn’t feel like you’re working because you’re having fun with mates.

Tell us a bit about the studio.

We used to work out of our bedrooms (as many of us do) but we moved into a studio in West London a couple of years ago and we love it. We only have a small room but it’s our cosy little cave. Having an acoustically-treated room has made a lot of difference to our quality of production. It’s definitely been worth it.

There is also a café at our studio which is a huge plus for when people come and work with us. The lady who runs it is also an absolute legend too, and makes us lunch most days – it wound’t be the same without her.

When we moved in, we bought lots of mood lighting and fake plants. The plants are mostly to trick us into thinking we are outside, as we don’t have windows in our room [laughs]!

Also, when we have people coming to work with us, it’s important that they feel relaxed. You want them to be able to think freely and create without inhibitions. Having a chilled vibe helps with this and, let’s be honest, we spend a lot of time in there so we may as well make it homely. 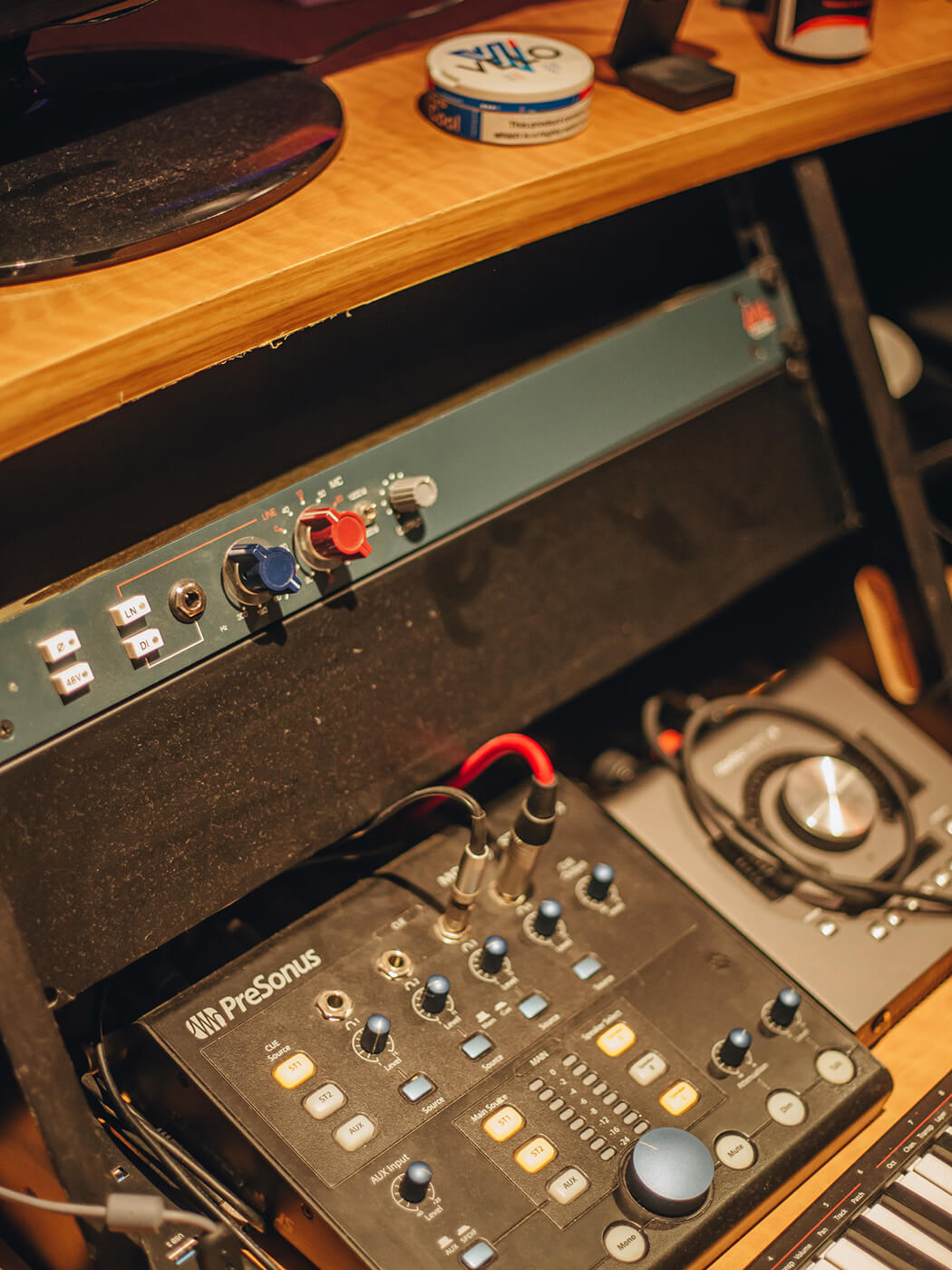 John uses FL Studio and Will uses Cubase. FL is so good for a speedy, creative workflow while Cubase is better for recording and editing.

Our PreSonus Monitor controller is a god-send. As we have two computers running at once through two interfaces, it’s useful to be able to both play music out of the same speakers and have a master volume control for both. It isn’t expensive and it also allows us to switch between our main speakers, grotbox and sub too. We used to have to unplug the cables from the back of our interfaces every time we switched computers which was really annoying – so no more of that, thank you!

What synth or effect can be heard the most on your new release?

We are big users of Xfer Serum, Xfer OTT and Valhalla Room. All three of these plug-ins are, without a doubt, scattered across every song we’ve made recently. 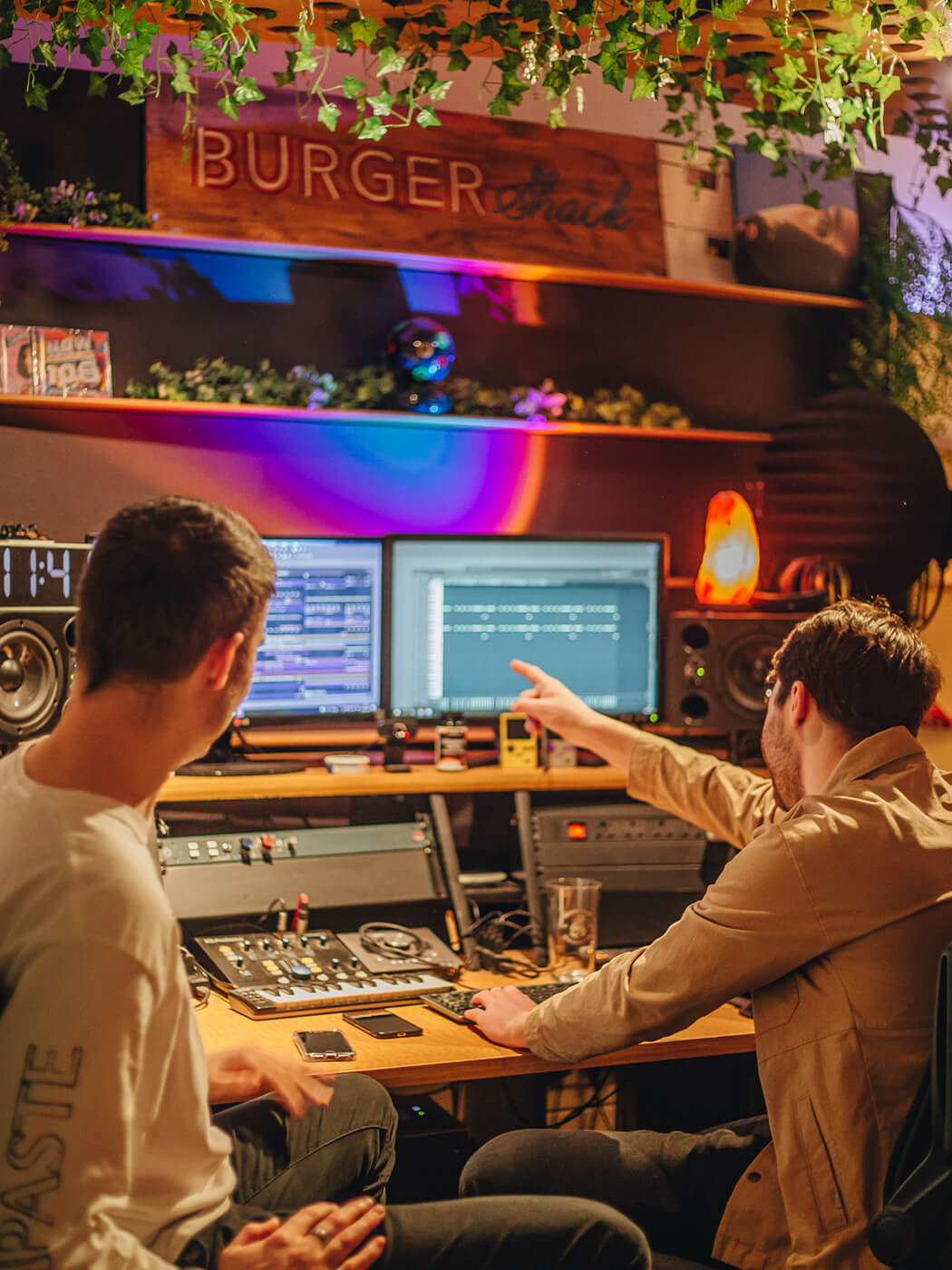 Can you dissect the track We Could Have It All, from the synth to the bassline to the braaams?

The main synth is two almost-identical instances of u-he Diva. But the patch playing the high notes has a noise oscillator giving the sound that brightness as it opens up. However, the patches are a simple saw wave put through a low-pass filter that is put through an envelope with low sustain, short decay and slightly slow attack so that the pluck isn’t too clicky. The key to this sound is having the glide turned up so that each time a new note hits, the synth glides down to that note to give it some intrigue.

We processed the synth with a plate reverb with a high decay time but low wet/dry mix. Next, it runs through Soundtoys Decapitator for some subtle distortion. Throughout the drop, the synth runs through Soundtoys Little Radiator, with the Heat knob automated up and down to create movement and dynamics. For the delay, we used a Fabfilter Timeless 2 delay, with the right side delay set to 1/4 and the left side set to 1/8 to enhance the stereo image. There’s also an EQ taking out the low-end, rolled off at around 80hz before the drop and then 150hz on the drop to make room for the bass. There’s a little bit of light compression on the whole patch using Fabfilter Pro-C 2, and then everybody’s favorite: OTT.

On the second drop, we introduce these big bass stabs to add extra drama and make the drop feel bigger than the first. This sound is made on Xfer’s Serum. It’s simply one oscillator playing a detuned saw wave with seven voices of unison. This is routed through a low-pass filter with an envelope that has a high attack of 49ms, a decay of around 2s and a low sustain. A lot of the main processing is done within Serum. It’s going through the Serum multiband compressor, a tube distortion with a high drive, an EQ to take the sub frequencies out, and finally, a small hall reverb with a decay time of 2.5 seconds and a high-pass filter so that none of the bass frequencies are coming through on the reverb. 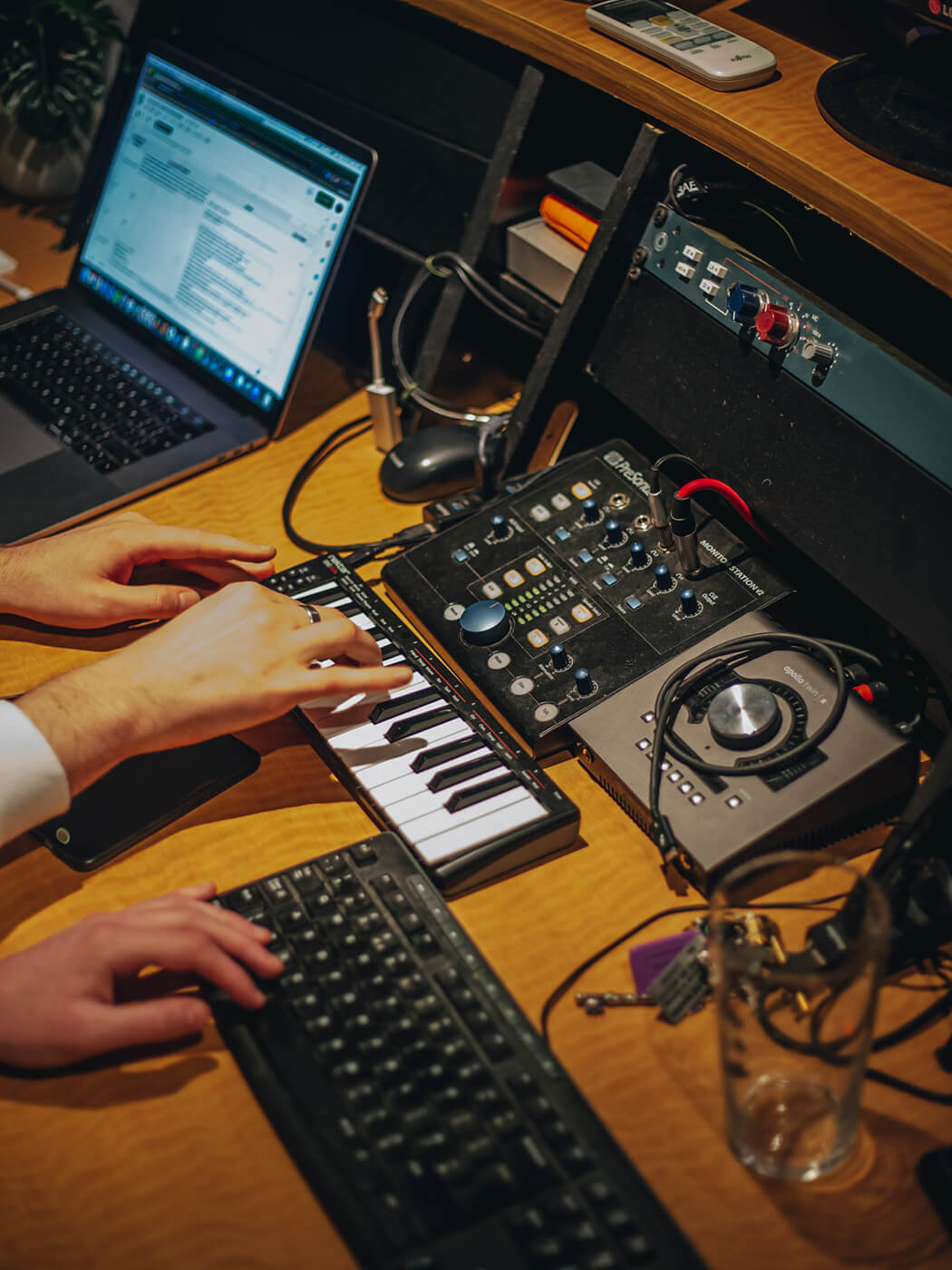 How do you go about processing vocals, like the ones we hear on the Maze EP?

These were recorded through a Neumann TLM103 which is a great mic for PHIA. They went through the Universal Audio (UAD) Neve 1073 pre-amp emulation with some autotune and subtle compression through Empirical Distressor. It was then paired with a boost on a Pultec plug-in around four notches at 10KHz. There was some further shaping EQ and compression after this with the UAD 1176. On this track, it also felt right to add some subtle chorus to the vocals. Valhalla Vintage reverb then gave this vocal a bit of space and we put a SoundToys AlterBoy effect on the drop to give the feeling of a switch up.

Having Googled the most complicated synth on the planet, we think it would be the smartest move to take a Moog System 55. We have no idea how it works but a lifetime is a long time and that is a lot of buttons to play with.

How did you go about getting the acoustics right in the studio?

Luckily, the room is already treated with a back and side wall panel for absorption. We then furthered this with five of our own handmade panels for the bare walls. Adding a rug on the floor and a sofa will also help! We also use an Aston Halo vocal shield when recording to help reduce the reflections recorded from the room. 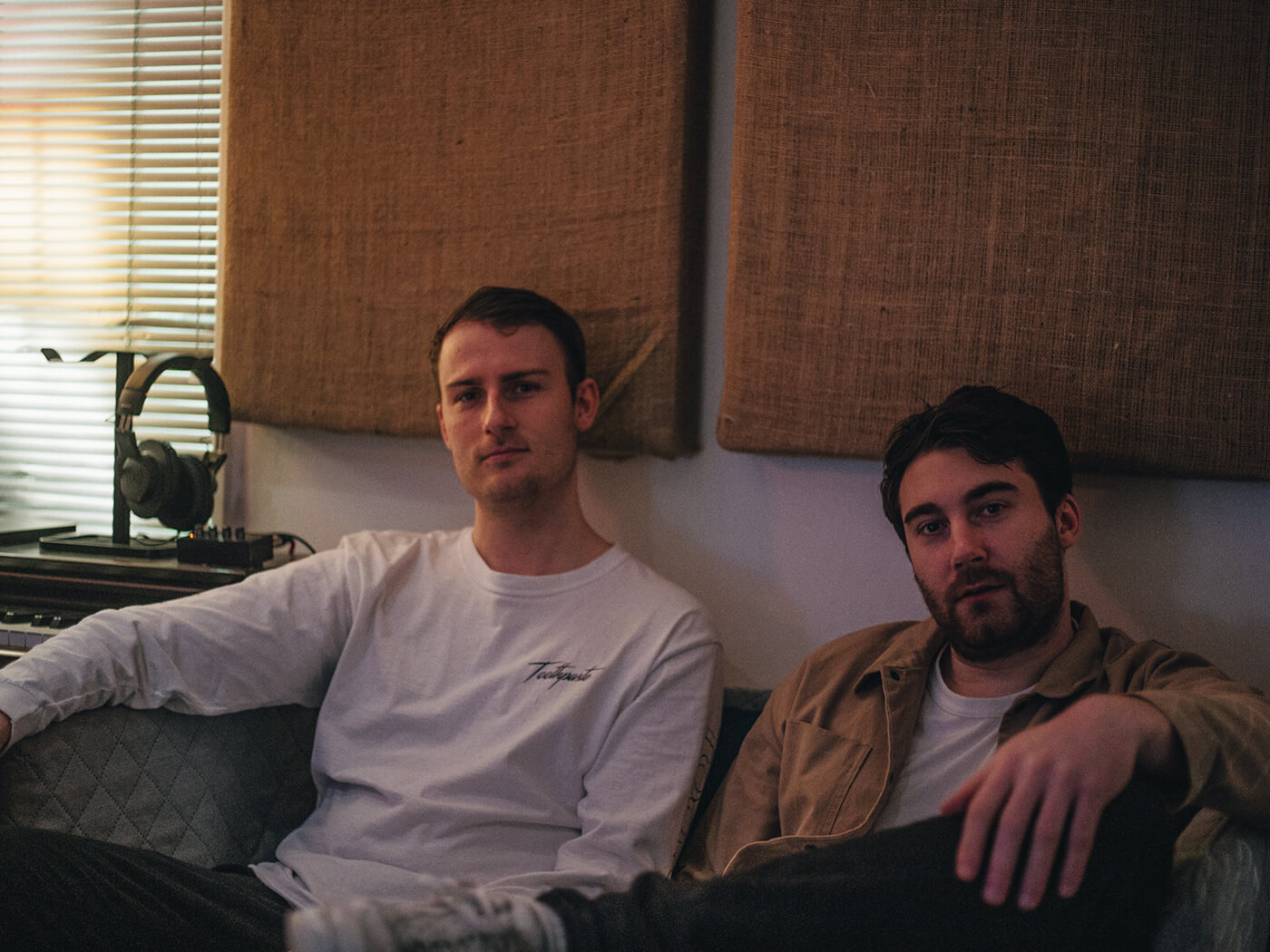 Spend time making ideas rather than spending hours on one project. Ideas are key, the best tunes always happen really quickly so keep searching for that magic moment where it all comes together naturally.

What is some advice you would give to someone starting out building a studio?

Make it as acoustically sound as you can with room choice and treatment, but don’t stress if it isn’t – good ideas will trump sound quality every time! Having said that, if you have a dead-ish sounding room then a nice pre-amp will go a long way if you can fork out for one. We would recommend the UAD Apollo Twin X – that instantly added clarity to our vocals.